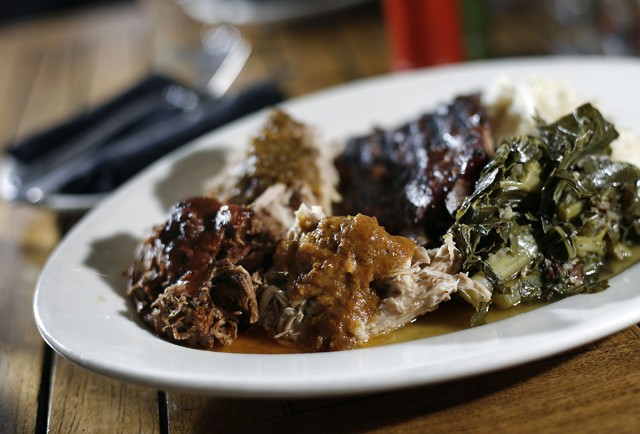 Chef Alex Young of Zingerman's Roadhouse is unapologetically meat-crazy — and yet he's vegetable-crazy too. This summer he served a $45 "Summer Harvest" dinner with vegetables from his own farm, picked just hours before, and then a $45 "Tomato Dinner," which is one of his most popular special events of the year. The centerpiece was the tomato bar, where mavens paired Aunt Ruby's German Green, Kellogg's Breakfast and other vintage strains with basil and house-made mozzarella, and every dish featured tomatoes in some form.

After being nominated every year since 2007, Young won the James Beard Foundation's "Best Chef" award for the Great Lakes region this year, for what he calls "Really Good American Food" — grits, greens, fried chicken, catfish, mac and cheese, chicken-fried steak, burgers, crab cakes, pimento cheese and chili (and a few ringers, such as Scottish salmon and osso buco). His vegetables are part of the success, but the restaurant's two most popular dishes are fried chicken and ribs.

Young is a proponent of very local sourcing, having expanded his family's garden — tomatoes, peppers, beans, eggplant, squash — into Cornman Farms, which pasture-raises hogs and cows for the roadhouse's pits. But he doesn't mind going further afield for what he thinks are the best ingredients: catfish from Mississippi, rice from South Carolina, macaroni from Tuscany. The osso buco is braised elk from Texas.

The result is rather expensive dishes that are almost uniformly exploding with flavor, from the mashed potatoes to a long list of cheddars, sold by the ounce. Eyes may widen at a $17 macaroni and cheese or a $13 grilled cheese sandwich, but they will close as the diner attempts to block out all other sensations besides the ones on the tongue. One of those "mmmm, omigod" moments.

I tried two beefs and two porks, some from Cornman Farms and some from a Niman Ranch in Iowa. Pit-smoked pork ribs were cooked for nine hours, the pulled pork pit-roasted for 14. The intensity of the smoky flavors produced thereby only increased as I got further into the meal. Smoked and braised beef, was, if possible, even better, and a rib-eye, though surprisingly thin, delivered what was promised.

I do wish Zingerman's would give us the option of serving the barbecue sauce on the side. Meat this good deserves to be sampled solo as well. Young's signature red sauce is deeply, deeply tomato, with a fire that sneaks up on you. The chopped beef is cooked in it, no option. The South Carolina mustard sauce, though it's good, is strong enough to overshadow other flavors. The other two sauces, available on pulled pork, are Eastern North Carolina vinegar and Southwest green tomato.

Outside of pork and beef, I found we did best when we stuck close to the American mainstream. Standard macaroni and cheese, for example, loaded with caramelized Vermont cheddar, was better than "Wild Local Mushroom Macaroni," where the mushrooms, greens and pasta are just lightly tossed, not baked together or otherwise melded. Additional mac-and-cheeses feature smoked chicken, arugula, pimento cheese, goat cheese and ground beef.

Young, who grew up in California, has mastered the Southern sides tradition, with the occasional updating. Mashed potatoes, for instance, leave a bit of peel on and add garlic. Potato salad is vinegary and combined with green beans, tomatoes are braised in lots of bacon. Above all are the greens. Though they're served with not much pot liquor, bacon and ham hock bits abound; the leaves are big and sturdy, with just the right hint of fire.

The only disappointments we found were fried green tomatoes, which didn't have a lot of taste; green beans — barely steamed rather than slow-cooked Southern-style; and fresh lemonade, too sweet, no pulp (Country Time is not the gold standard here).

Desserts can be simple, such as the chocolate pudding: inventive, like an oddly peppery fruit-bread pudding with chunks of juice-soaked bread and whole blackberries, strawberries and blueberries. Or they can be completely over the top: The Monday doughnut sundae (a different one is featured each day) has bacon chocolate gravy, bacon, bourbon-caramel sauce, whipped cream and peanuts slathered on vanilla gelato. With a cherry. And a doughnut.

There's a studied retro feel to the roadhouse (Salisbury steak, corn dogs, cabinets full of kitschy salt-and-pepper shakers), and they add to it by offering little boxes of matches.

There's enough going on there to keep a fan busy every day of the week, what with the farmers' market, special brunches and dinners, benefits, monthly featured drinks from the bar, Wednesday night music (through Sept. 21) and even "Camp Bacon."

And that's just at the roadhouse — the seven-location Zingerman's empire (deli, bakery, creamery, etc.) publishes its own tabloid filled with stuff to learn, eat and do, such as Bread Weekend Sept. 24-25. I'm not crazy about empires, but Zingerman's, which will be 30 years old next year, has managed to expand while never letting down on quality.