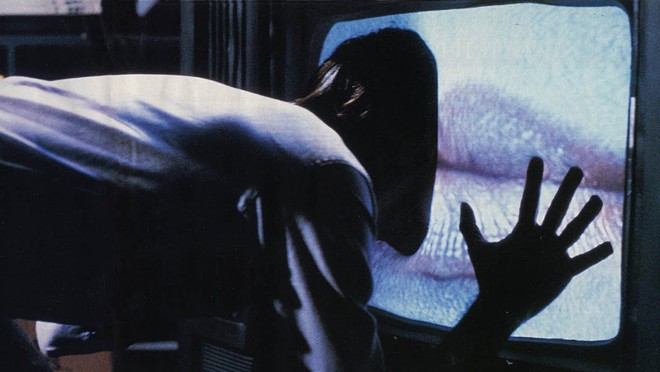 Technology in Videodrome feels like everything it could be at once. David Cronenberg’s 1983 surreal mishmash of science fiction and corporeal horror frames television as an alarm clock, a “pleasure machine,” a VR-like portal to some other planes — and, crucially, a tool for power, surveillance, and violation of not just its viewers’ (or users’?) privacy but their bodies themselves. Playing off the same notions of technology having a mind — and body, and agency — of its own in ways that now recall James Cameron’s Terminator (out the next year, in 1984), the suggestions made within both films look less like gambles on potential futures than safe, if speculative, presumptions that we’d soon be getting more than we bargained for in betting on technology to save us — or even please us.

But what’s more refreshing about Videodrome, which screens at Hamtramck’s indie theater the Film Lab this month, is that in its actual execution it’s anything but safe. Casting a nervy, unapologetically perverse James Woods as Max Renn, a black-market video pirate and distributor, Cronenberg positions the one-time leading man as both an avatar and self-interested advocate for the viewers’ most sadistic desires and their fulfillment. Defending CIVIC-TV, his distribution vehicle, as a “harmless outlet” for programming that allows for a contained engagement with “violence, sex, imagination, catharsis,” he suggests that what’s caught onscreen is entirely an illusion — and that the (presumably) staged nature of the productions insulates both viewers and actors from harm. When he praises what looks to be a snuff film found early on as “very realistic,” portending the future of the market if not the video — and it could only be video — form, he’s wishfully imagining a world in which any exploitative pleasure can be easily obtained without a social downside. Not that it’s clear he’d exactly care.

But as he moves through a dingy, barely futuristic Toronto decorated in a mess of bad paint, littered cardboard, and filthy rags, he finds that the tape marked “Videodrome” seems to exert a kind of pull on those who see it, even touch it: and not just the need to investigate it he feels as a viewer and purveyor or underground material. Those who hear about the “Videodrome” tape are inclined to want to expose themselves to it — because it’s one the movie’s bankrupt world’s straightest shots of mystery or excitement. When a romantic partner pushes Renn to pierce her ears in bed, she winces in pain and ecstasy while cinematographer Mike Irwin’s camera responds perfunctorily, moving out from them with a passive, steady inevitability. Cronenberg, in other words, frames this light display of kink without any sense of scandal, instead suggesting with a faintly distanced anthropological interest that this is simply a thing that people do to keep sex interesting — while allowing that it may still experientially transport them. In Videodrome, even as nothing looks particularly attractive (though its actors sometimes do), sex is always in the air but drained of any sense of romance (a symptom, maybe, of a post-’70s cultural hangover). This presumptive sense of availability is part of what makes some new twist or wrinkle to it needed, and that’s exactly what Renn’s business is set up to provide.

But it’s what Videodrome is meant to offer up, too, and not just comment on: providing viewers with a firsthand interrogation of the many spaces in which novel technology and personal desire collide. With Blondie’s Debbie Harry dominating the film as Nicki Brand — sometimes a corporeal presence but always a seductive voice or redheaded vision mediated by variously deranged programs transmitted to radios or screen — she embodies the film’s frenetically gendered conception of media’s more intrusive-than-ambient potential to attract, reshape, and even radicalize its consumers. The fact Woods himself has since morphed into an unhinged conservative Twitter personage only enriches the suggestion.

“Your reality is already half video hallucination,” warns one Professor Brian O’Blivion (“All of us will have special names,” he muses, too, of our collective future), suggesting with pointed ambiguity the ways in which our personalized, subjective slices of reality can erode a collective whole one. The trick in Videodrome, though, is that consumers, as ever, are presented with what’s really an illusion of choice — viewers who think they’re choosing the reality they want to participate in are more often being chosen by it, with the film’s TV signals altering viewers irrevocably, both their bodies and their minds. Responding especially to VCR technology, which empowered users to decide more freely what they’d record, pirate, share, and show, Videodrome presents television as a complexly faceted and not-easily-censored force in the lives of those who watch it. Even for VHS viewers, it’s hard to predict what one might find on an unseen tape — or how it might affect them. Lending new charge and playful overtones to ideas like passive viewing, active consumption, and consumer choice, the film’s vision of consumption is at times as plain as its take on sex: the characters, regardless of what they may think, aren’t remotely the tops they think we are.

But more winning even than its assemblage of messy, evocative, and contradictory ideas is the fact that Videodrome is so freely and strangely pleasure-forward: a quite-uncensored aesthetic force even now. Willing to be ugly and gross in one moment, philosophical and mystifying in the next — and always with an elusive tone — the film retains some life to it because it’s willing to confront and expose what’s unseemly not just as some outside force but deep within itself, intimately and up-close. Drilling down through sadistic, fearful, and cathartic manifestations of the unconscious, Videodrome’s buoyed, too, by a lack of judgment, an air of humility, and a caring sense of personal and creative vision running through it from conception to effects. There’s still never been anything like it.

Videodrome is playing at 9 p.m. on Saturday, Sept. 4 and Saturday, Sept. 11 at the Film Lab; 3105 Holbrook Ave., Hamtramck; thefilmlab.org. Tickets are $12. Under 18 must be accompanied by a parent or guardian.