Longstanding Detroit family business hopes not to get washed away 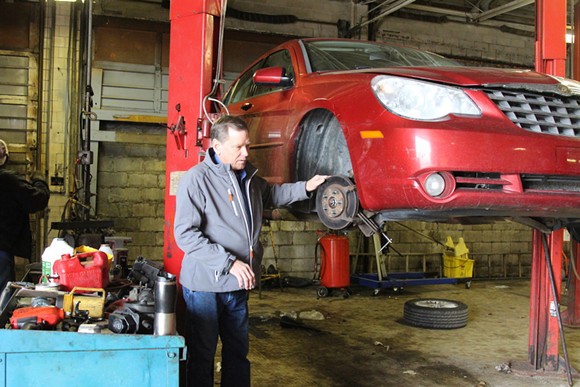 The land Tony Greiner's Metro 25 auto shop rests on is a piece of family history. His first ancestors to arrive in Detroit were John Greiner and his wife Catherine, of France's ruling Bourbon family, who emigrated sometime around 1830. The family became well-known on Detroit's east side in the pre-Civil War era as their money helped to build the Assumption Grotto Church, the second oldest parish in Detroit. Today, many of Greiner's ancestors are buried in a private cemetery on the grounds of the parish just past where a street bearing their surname empties out onto Gratiot Avenue.

But now, Greiner's future in Detroit is uncertain. A change in the way the Detroit Water and Sewerage Department charges for rainwater drainage could shutter his family's auto shop — a cost that doesn't appear to be affecting businesses on the other side of Eight Mile Road.

"You either pay it or they take your buildings... what are you going to do," says Greiner, a thin man in his late 60s dressed in a blue mechanic's outfit and sitting behind a desk in his family's aging auto repair facility. As the front door and floor tiles show their age, Greiner's wife, Maria, happily helps customers from behind a chest-high service counter as artful renderings of cars, some of the models likely sold or fixed at the shop dating back to the 1910s, line the wall behind her. But it's what's landing on the roof and the lots outside that has Greiner concerned.

In August, the DWSD sent a letter to Greiner telling him his properties are part of over 20,000 parcels that had not been previously assessed by the city for stormwater runoff at the rate of $750 per acre per month. According to the DWSD website, these are not new fees; in fact, they date back to 1975. Marcus Hudson, the DWSW's chief financial officer, told The Detroit News in August the change was about "creating equity in the system" and could bring in up to $10 million in new revenue for the $125 million in annual costs to handle rainwater in the system on an annual basis.

Given the amount of property Greiner owns — five buildings stretching almost two city blocks — the charge comes out to about $24,000 annually just to handle rainwater. And that's before property taxes or other city fees assess in his annual cost of doing business — a large sum for a small business running on tight margins.

Thankfully, Greiner owns the buildings, so he doesn't have to pay rent. But, due to the way water bills are now handled in Detroit, that's not a guarantee going forward.

In the 2005 tax year, the city moved water bills from a lien against the property to be paid at sale to incorporating them into the property taxes handled by Wayne County. That means that if the water bills are not paid within three years, some of the property Greiner's family has owned for almost 190 years could go into foreclosure. The DWSD website states there's no assistance to business owners when it comes to handling the drainage fees, leaving businesses like Greiner's with few options.

One option he has been considering for the family business — one that so many other businesses in Detroit have taken — is to pull up stakes and move to the suburbs. (The Mount Olivet Cemetery across the street even relocated its deceased.) Greiner found that the nearby suburbs of Warren, Center Line, Sterling Heights, and Eastpointe do not charge similar drainage fees — yet they are all wholesale customers of the Detroit Water and Sewerage Department.

The Detroit Water and Sewerage Department says the effort to bring 20,000 parcels onto the rolls to pay the drainage fee is about funding $151 million in costs related to waste water treatment to keep area waterways clean and is a way to make sure businesses, residential, and houses of worship are paying their share.

Recently, this last group has come out against the drainage fees as well. A new group called the Detroit Water Equity Coalition has been created, and over 200 members of the clergy have joined. They came together to hold a rally protesting the water charge in late February, with the Rev. James Michael Curenton of the United Church of Christ saying pastors fear the high cost of drainage will force some churches to close. According to a Detroit Free Press report, Curenton called the new fees "not sustainable," "unjust," and "designed to destroy" the churches. "We're not taking this lying down," he said.

Bryan Peckinpaugh, public affairs director for the DWSD, says the change is about fairness. "It is inequitable to our customers who are paying for the annual cost of drainage service to continue to do so while 22,000 parcels which were never charged bear no responsibility," he says. "While state law allows utilities to back-bill for up to six previous years, DWSD chose to move forward and not back-bill with any property. Similar to many water utilities in America, DWSD will charge all customers for drainage by impervious acreage. Impervious surfaces are hard surfaces such as cement, asphalt, and rooftops that don't allow stormwater and snowmelt to soak into the ground." (Peckinpaugh says the collection fo faith-based parcels was moved to January 2018.)

Peckinpaugh says property owners could receive credits from the DWSD by controlling drainage, and through some physical improvements such as removing concrete and allowing stormwater to seep into the ground instead of running into the sewer. The credits, based on various measurements taken by water system officials, can max out at 80 percent of the annual costs for drainage.

Meanwhile for Greiner, the question centers on market forces. "We don't know exactly what to do at this point," he says. "We don't know what the future is going to hold, and it's a matter of can we survive for the next two or three years and see what happens? Who wants to buy buildings down here in Detroit or take over a profitable automobile repair center? If we don't find a buyer for it, then we are basically stuck or we just make the decision to move and just walk away."

Greiner says he believes if the business were to go into foreclosure or if they left without selling the properties, the buildings would face the fate of so many abandoned structures in Detroit — they would be stripped of copper wire and other valuable scrap metals within a week.

"It hurts when I'm basically the last person in the family (business) and some of these hard decisions are going to have to be made," he says. "What do we do? Do we stay here? Do we get any help from the city? Do we have any city council members who even come out here?"

Greiner, his wife Marie, and their son Claude are the last in a line of family members who have worked repairing and selling vehicles. Starting small in 1896, Greiner's grandfather, a Dutch immigrant named Bernard J. Ver Hoven, used his blacksmithing skills to service horse-drawn carriages in a storefront on the other side of Van Dyke. Within a few years, horse-drawn carriage repair became horseless carriage repair. In 1918, Ver Hoven started a Ford dealership. The Ford contact lasted about 16 years but ended in spectacular fashion. According to family lore, in 1934 the big boss himself came to the showroom demanding Ver Hoven sell him the business, something Greiner's grandfather did not want to do. That's when a heated argument led to Henry Ford receiving not only a ripped up dealer franchise agreement but also a knuckle sandwich.

After ending his relationship with Ford, Greiner's grandfather carried Dodge for about six months until he became a Chevrolet dealer starting in 1935. The family's final Chevy was sold in 1980, and Greiner has been running the business as an independent auto service center since 1981.

Like any business, the auto repair shop has seen ups and downs; everything from recessions to the blockage of McNichols at Gratiot Avenue in 1987 by the city that drastically cut into customer traffic. But Greiner's family has been innovative in an effort to keep the legacy business alive. In the 1980s and 1990s, Greiner started serving food and liquor to waiting customers and those who dropped off their vehicle for work. The restaurant closed in 1993, but since then the family has moved on to selling subscriptions for DirecTV and cable as well as U-Haul truck rentals to help keep afloat.

Three years ago, Greiner established Motor City Automotive Training Center, the only licensed auto repair trade school in the city, to help build the next generation of auto repair professionals — a career field Greiner says is growing given the future of autonomous vehicles expected on the road in the next decade. Greiner says he's reached out to Detroit Mayor Mike Duggan's office at least twice over the past two years about the school and has not received a response. He wonders if the lack of response from the mayor's office is on purpose, given his distance from the current redevelopment zone in the city.

As someone with roots that go back in Detroit to the 1830s, Greiner says he's happy to see the improvements and redevelopment downtown under the Duggan administration. But he's concerned there's a major disconnect between the "7.2" square miles of Detroit seeing investment — like downtown and Midtown, which includes the taxpayer-subsidized Little Caesars Arena — and the rest of the city.

"The people out here don't have any place (to go)," he says. "They don't like going downtown. They can't afford the parking. They don't feel like they are a part of what's going on downtown, but they are paying for it through their taxes."

Greiner is saddened to think about the prospect of being forced to leave the city after all these years. "I enjoy Detroit," he says. "I enjoy the area that we are in. I like the people who are down here. We have no bars on the windows. We are safe."

But Greiner says he feels like his decision is being forced. "There's no compassion for us out here away from downtown," he says. "It's like we don't exist."