Dan Stamper spends some hours in the slammer 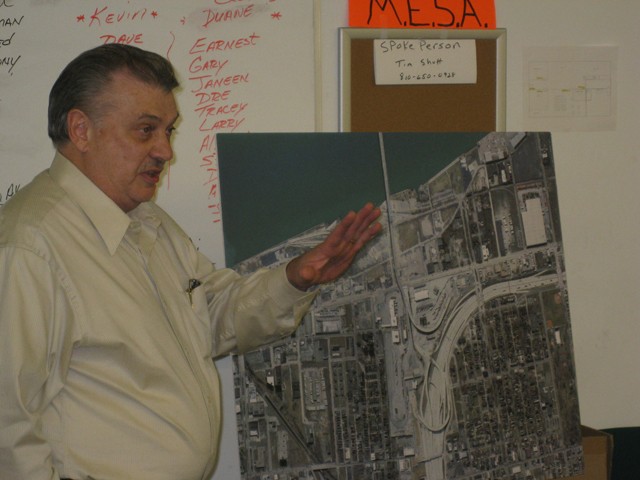 News Hits has a new hero. His name is Prentis Edwards.

Edwards, a Wayne County Circuit Court judge, earned his way into our pantheon on Monday by giving the Detroit International Bridge Co. the kind of public spanking it has long deserved.

Fed up with its steadfast refusal to abide by a court order issued last February, the judge found the renegade company in contempt and had handcuffs snapped on its president, Dan Stamper, who spent the afternoon behind bars.

The only thing better would have been for Edwards to issue a subpoena for company owner Manuel "Matty" Moroun so that the billionaire mogul from Grosse Pointe could have joined his chief henchman in the slammer. For good measure, he hit the company with a $7,500 penalty, the maximum allowed.

The specific issue that prompted Edwards to lay down the law concerns the public-private Gateway Project, a $230 million endeavor designed to provide direct freeway access to the Moroun-owned Ambassador Bridge in southwest Detroit. The federal government kicked in much money because a focus of the project was to remove bridge truck traffic from surface streets in the area.

A contract was signed and obligations assigned. The problem was that the bridge company made unilateral changes to those plans without receiving the permission of MDOT. A lawsuit was brought. Last year Edwards ruled in favor of the state and ordered that work done by the company that wasn't in compliance with the contract be removed. That included taking down fueling stations, toll booths and a portion of a duty free shop built over 23rd Street.

The company, by the way, never received the city's permission to close off that street. That's part of Moroun's M.O. — act first and receive permission later. The same thing is going on in Riverside Park, where the company has fenced off a 150-foot-wide swath of public land. It attempts to justify that seizure by claiming the fence is needed for national security purposes. The truth is that the company wants the land so that it can use it to build a second span adjacent to the Ambassador. For more than two years now, the city has been trying to get the company to relinquish control of the public's property.

Construction of that hoped-for second bridge also plays into the case before Edwards. Along with the other work, the company also constructed a massive ramp for current traffic but also able to connect to that new bridge — if it actually gets built. Problem is that part of the ramp, identified in court as "Pier 19," wasn't approved and conflicts with the plans contractually agreed to.

As best we can tell, Pier 19 needs to be removed as well. Which means that, in terms of making progress on the new bridge, the company continues to move backward.

It remains to be seen how that sticky question gets resolved. According to the company, an appeal in state court is possible, but no decision has yet been made in that regard.

It has already tried to get the case moved to federal court. Tried twice in fact, failing both times. After the second attempt, U.S. District Court Judge Patrick Duggan observed:

"Considering this Court's more than 33 years as a judicial officer, DIBC may be entitled to its recognition as the party who has devised the most creative schemes and maneuvers to delay compliance with a court order."

After spending a few hours locked up, Stamper was released when the company began doing unspecified work to follow Edwards' order. But his short stay behind bars apparently did little to induce any sense of remorse. Instead of admitting the company was in the wrong, he maintained that he and his company had fallen victim to a plot by MDOT, which is a partner in an effort to see a publicly owned bridge built about a mile downriver from the Ambassador.

As we previously reported, Moroun and company have pulled out all the stops in an attempt to avoid any threat to its near monopoly on local truck traffic crossing the Detroit River.

"MDOT bureaucrats are doing everything they can to stop our successful 80-year-old private sector business from building our new bridge with our own money," Stamper said in a statement. "They will lose. This won't stop us, and our new bridge will be built and serve the public well."

In its statements, however, MDOT has consistently been on the record as being a supporter of both a new bridge downriver and a new span next to the Ambassador. Looking to the future, it wants the capacity to be able to compete with the Niagara-Buffalo crossings to help ensure this region can reap the economic benefits of cross-border trade.

"Today's ruling sends a strong message that you cannot ignore a court order," said William Shreck, MDOT's acting director of communications. "It is time to obey the court and build what we all agreed to."

Despite Stamper's claims of being a victim, the reality is that the actions taken by Edwards on Monday have nothing to do with new bridges. Instead, it is about the rule of law, and the fact that no company or individual — no matter how rich and powerful — should be above it.

It is a lesson Moroun, Stamper and the bridge company have been slow to learn.