Godsploitation! - A born-again Rambo kicks ass for the Lord 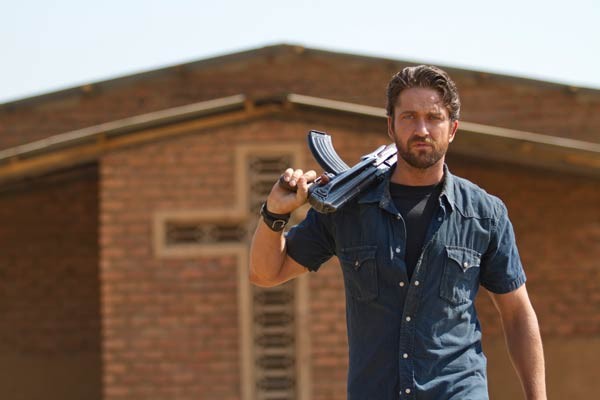 Yes, even Rambo can find Jesus. Which is convenient when you need to blow away dark-skinned baddies in the name of the Lord. In the final moments of Marc Forster's Machine Gun Preacher, as the last credits roll, there's documentary footage of the real-life Sam Childers asking: "If you had a child who was kidnapped and I said I could bring them home to you, does it matter how I bring them home?"

It's a troubling question, one that gets to the heart of everything that's wrong with this based-on-a-true-story account of Childers' life. Because instead of examining the moral implications of a man depicted as a Third World vigilante, Forster's sincere but graceless reinforcement of the white bwana myth is either unable or unwilling to confront the violent and lawless actions of its supposedly God-fearing Christian protagonist.

Childers (Gerard Butler) is introduced to us as a hard-drinking, Harley-riding criminal with a taste for heroin. Sprung from jail and eager to slip back into his bad old ways, he discovers that his old lady (Michelle Monaghan) has given up stripping and become a born-again Christian. This infuriates Sam, so he gets high with his childhood pal Donnie (Michael Shannon), robs some drug dealers, and ends up stabbing a homeless wino. Believing he's killed the man, Sam rethinks his life choices, and before you can shout "hallelujah," turns to Jesus, cleans himself up, and becomes a successful building contractor (though, interestingly, he never turns himself in for murder). But doing right by his wife and daughter just ain't enough. Childers opens a ministry that caters to low-lifes looking for salvation, then, on a whim, travels to war-torn Sudan to do some charity work. It's there that he encounters the plight of orphans and the extreme violence they face. This convinces Sam that he's found his true calling in life: to build an orphanage ... no matter how many sonofabitch African militants he has to gun down.

With its righteous endorsement of taking up arms to do what needs to be done (damnit!), Machine Gun Preacher makes literal the notion "soldier for the Lord." And while Childers' actions would be a criminal offense here in this country, in lawless Sudan they're viewed as a perverse sense of charitable outreach. If only the selfish bankers who refuse to underwrite his mission would see it that way.

There's little doubt that the Sudanese Lord's Rebel Army is guilty of perpetrating despicable acts of evil and brutality — especially against children. But it's hard to ignore the fact that Forster's film doesn't view Childers' desire to wage a personal war as morally flawed or disturbingly contradictory. Are his actions genuinely humanitarian or just a rationalized substitution for the violence he's already proven he's capable of? Neither the movie nor Butler's impassioned performance takes a side. Instead both are relentlessly one-dimensional in their approach, indulging in the kind of gun-toting Christian piety that can only be labeled Godsploitation. That said, Childer's story will undoubtedly play well in Red State multiplexes.

Forster's direction is best described as blunt, with an appropriately restrained and unadorned style that doesn't whitewash the vicious brutality that infects Sudan. (And much of the film was shot around Detroit.) But as he's demonstrated in his culturally tone-deaf The Kite Runner, overstylized Monster's Ball, and misfire of a Bond flick A Quantum of Solace, artistry, subtlety or inquiry are not his strong suit. Instead, the movie takes a simple and shallow approach to a complicated man.

Childers' admittedly incredible life story demands a sophisticated documentary treatment, one that doesn't use children in danger as an excuse for cheap sentiment and unquestioned brutality. After all, who can argue against the knee-jerk desire to kick ass and save orphans in a hellhole like Sudan? But by sidestepping questions about whether the mix of faith and violence are the actions of a saint or psychopath, Machine Gun Preacher embraces the idea that all it takes to right the wrongs of a Third World nation is a white American male with lots of firepower.