We're smitten with the mitten ... An economic snapshot shows Michigan is finally producing numbers to take pride in. 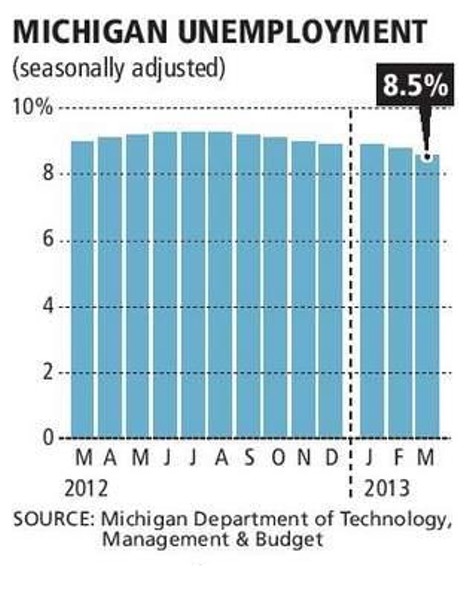 MICHIGAN HAS OFTEN been called a “canary in the coal mine.” The state’s once-dominant manufacturing base — its automotive sector — has always been susceptible to the slightest hint of recession. As a result, economic contractions are typically felt here well in advance of other indicators that register on a national scale.

Of course, the gutting of the U.S. manufacturing sector, which began after the rupture of the tech bubble in 2000, and continued throughout the new millennium’s first decade — exacerbated by a real estate bubble that drove the entire Western banking system to the brink of collapse — has made our once-rich state’s economic output comparable to states in the deep South.

Yet, despite Michigan's loss of more than 700,000 manufacturing jobs — and nearly 1 million people — over the course of 10 years, the state is on firmer economic footing now than it has been in a generation. The latest indictor, provided by the Institute for Supply Management's manufacturing index, shows a near two-point increase — to 50.9 in June 2013 — from 49 a month earlier. (A reading of 50 is the dividing line between expansion and contraction.)

And while Gov. Rick Snyder, a Republican, and his predecessor, Jennifer Granholm, a Democrat, have championed industry diversification, the car is still king — especially in Detroit. And, according to the latest release of information, that’s not necessarily a bad thing.

U.S. auto sales accelerated in June to the fastest pace since December 2007, according to a survey of analysts by Bloomberg News. The projected growth in June, which analysts say was led by Nissan Motor Co. and Ford Motor Co., will keep the United States on track for its best annual sales in six years.

“The market is very strong and we seem to be doing well despite what’s going on,” George Magliano, senior economist at IHS Automotive in New York, told Bloomberg News, referring to the volatility in the stock market due to uncertainty over continued Fed involvement. “Is the market going to be immune to the sell-off of the stock market and the rising mortgage rates? I find it hard to stay as strong in the face of these things. We’ll probably back off a little bit and then pick back up.”

Brisk auto sales are a combination of low rates for new-car loans, pent-up demand from Americans replacing the oldest vehicles ever on U.S. roads and the domestic auto manufacturing quality; the Big Three are producing their best cars in a generation.

The state’s expansion, according to the Michigan Department of Technology, Management and Budget, is concentrated in specialty trade construction, but a May report by the Home Builders Association of Michigan indicates that the industry is on pace for a potential 37 percent increase in single-family home construction permits. However, a shortage of skilled laborers may hamper that estimate, according to the report’s authors.

“Right now the worker shortage is really causing things to slow down,” Robert Filka, the association’s CEO said in a recent interview. “And I think it’s going to get worse before it gets better.”

Despite a statewide unemployment rate of 8.4 percent in April, still one of the nation’s highest, it seems the economic expansion continues to lift Michigan from its most severe economic crisis since the Depression.

Overall, things look better now than they have in several years, setting the stage for healthy, sustainable growth in the decades to come.

Most notably, growth will no longer be solely dependent on the Big Three. Instead, it will come from both the autos and a new creative class coalescing in and around the state's hub cities, like Detroit and Grand Rapids. Small businesses, entrepreneurs and innovators, creating better mousetraps and driving new ideas, will play as significant a role in helping the state redefine its definition of success.

Meet a handful of these innovators by clicking on the links below; throughout the next several months we plan to keep those introductions coming too.

Who Wouldn’t Love a Pony?
Made in Michigan
Baker’s Half-Dozen