Marijuana businesses are ready to open in Detroit, but city council is keeping them waiting 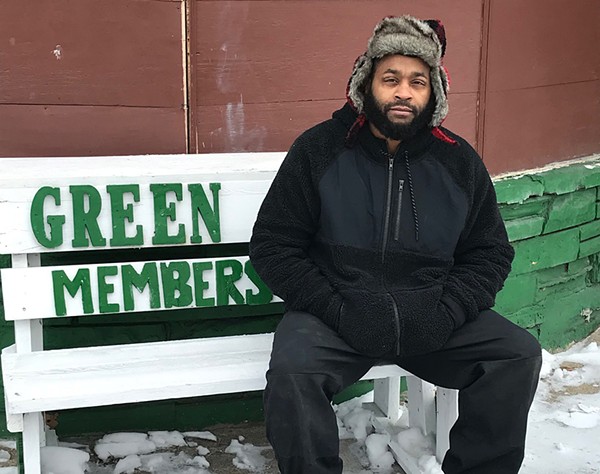 We still haven't heard a word from Detroit City Council regarding opting in to the state recreational adult-use marijuana program. Initially, Council set a Jan. 31 deadline as a possible opt-in date. On Tuesday, as this story was going to press, city council voted to extend the moratorium on recreational marijuana businesses opening until at least the end of March. It doesn't look like Detroit is getting on the weed train just yet, and it's doubtful that anything could be in place by the end of the month.

That doesn't sit well with Carnell Lockhart, who can't wait to get into the marijuana business. Lockhart owns the Green Hub on McNichols across the street from the former Marygrove College, where he wants a license to run a Designated Consumption Establishment. However, since Detroit has "temporarily" opted out of the state adult-use system, it's not taking applications.

"I'm real sad about what the city is doing," says Lockhart. "We're ready now. Until the city gets it together, it's forcing people like me to stay in the black and gray market."

Sorry, stoners: Detroit extends moratorium on recreational marijuana dispensaries
By Steve Neavling
Marijuana News
Lockhart has been running cannabis-friendly parties at the Green Hub or renting his building out for similar private events. He's further ahead of the game than most folks trying to squeeze in because he owns his building. He's already applied for his social-equity status — qualifying for the 25 percent reduction in fees as a resident of a disproportionately impacted community, and another 25 percent for being the primary owner of his business. That drops the license application fee to $3,000, and the license fee to $500, something eminently doable in his world.

"I want to be legit," he says. "I'm tired of throwing underground smoke parties, man. There are plenty of people around throwing parties."

Lockhart also works as a tree trimmer for DTE Energy. His partner runs a daycare center out of their home behind the campus of the recently closed Marygrove. His brother owns a daycare a block over on McNichols. Lockhart owns another building nearby. Let's say he's invested in the local community. He envisions the Green Hub as a community center open for local meetings and gatherings. He's been trying, with little luck, to get his college fraternity interested in the project. It's an uphill battle for him among young Black professionals who don't see Detroit as the place they want to do business.

Lockhart recalls being asked, "Why would anybody want to mess with the city of Detroit?" Frankly, he was told that and worse. Detractors include most of his educated and professional siblings.

His response is, "Have you heard about recreational marijuana?"

‘We’re ready now. Until the city gets it together, it’s forcing people like me to stay in the black and gray market.’ tweet this

The 38-year-old former college football player has something to prove on a lot of fronts. Lockhart recalls the first building he bought with little more than determination. He paid attention when contractors came in to bid jobs, then got busy on the internet to learn how to do the task, taking things one piece at a time in order to do it himself with a low overhead. The same thing goes for his history of having daycare centers in his home. He can charge less when you're not paying rent to someone else.

Lockhart wants to prove that you can make it in Detroit and uplift the city. He wants to prove that marijuana is a viable business that can help uplift a neighborhood. He envisions hosting community meetings and educational events. That's something akin to what's happening a few blocks east on McNichols around the Detroit Sip coffeehouse and the efforts of the Live6 Alliance and the city's Fitz Forward initiative to rehab houses and fix up the neighborhood.

But none of those official visions seem to include marijuana. The Fitzgerald neighborhood is in transition. When the Fitz Forward initiative was announced a few years back, Marygrove College anchored its western border. Marygrove ceased operations in December with no stated plans for the 53-acre campus.

The Fitz Forward initiative is stalled, having finished only a fraction of its goal of rehabilitating 115 homes by fall 2019. Most of the Live6 successes are on Livernois, not Six Mile Road.

So Lockhart's dream looms as big as anyone else's on his little strip of Six Mile, where Lou's Delicatessen is the last remaining icon of an era when this was a vibrant, active business strip.

Dare I say that the 53-acre Marygrove campus would make an incredible marijuana industrial center with grows, processing, education, and research all centered on cannabis. It's in the middle of a depressed area that could use some reinvention. Such a large and impressive endeavor would have to be city-led, visionary, and expensive. So it's not going to happen.

Across the street at the Green Hub, Lockhart has a vision. Can it get grandiose? It sure can. But Lockhart takes it through the achievable building blocks as he moves forward.

"A part of me wanted to go to retail," he says. "But I decided to focus on a private club. Just keep the club, then maybe do delivery services. You can't come into this trying to get rich, but money is going to come."

Lockhart would see himself having a retail store down the line. But he's also aware that the state isn't even taking retail applications from non-medical marijuana facilities until November 2020. So he's taking what's available, eyeing the landscape, and staying in contact with the Marijuana Regulatory Agency.

That's a formula for growth. He's got a parking lot on the side of his building that will hold about 15 cars. The building will hold about 100 people for a party. There's a tiny kitchen in the back. This place could be operating soon after the city gives the go ahead for recreational marijuana businesses.

"Until the city stops dragging their feet," says Lockhart. "It feels basically like I'm sitting in front of the club. Sitting on my little bench that I built."

For the moment, then, he's just a benchwarmer.

Over the past decade as medical marijuana and recreational marijuana became a reality, the city of Detroit has had little to say. Leaders never addressed provisioning centers until forced to. In the meantime, a sprawling, unkempt industry emerged with a vested self interest to keep it that way. Again, the city has failed to get out ahead of recreational marijuana. It won't lead to the kind of sprawl we saw with provisioning centers, but the delay puts the city at a disadvantage as the industry consolidates without Detroit. Could you imagine Illinois legalizing without Chicago?

Related Michigan's recreational marijuana sales are off to a sluggish start

Michigan's recreational marijuana sales are off to a sluggish start
By Steve Neavling
Marijuana News
It's a new era for marijuana in Michigan. Sign up for our weekly weed newsletter, delivered every Tuesday at 4:20 p.m.