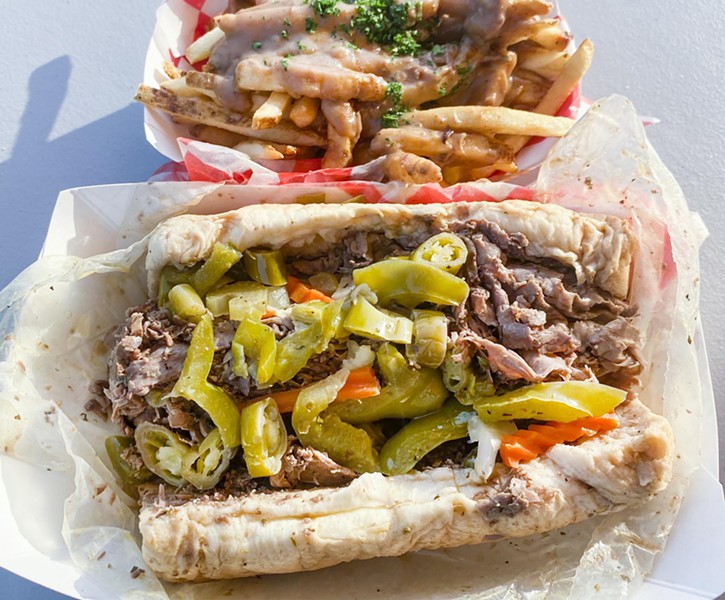 At first glance, the Italian beef sandwich isn't much more than a massive roast-beef hoagie, a blue-collar staple from Chicago's south side that's almost cartoonish as it drips wet from a quick dip in a jus bath. The package is a bit blunt in its presentation, but accessible and comes at a low price point, making it hard not to think of it as Chicago's answer to Philly's cheesesteak.

It's also super messy and the type of thing that would seem to play well in a city whose top culinary export is the coney dog, but my informal polling since Chicago Italian Beef purveyor Matt and Mo's opened in Hazel Park's last spring arrived at a somewhat surprising conclusion: Michaganders know very little — if anything — about the Italian beef sandwich.

That's in part because, despite Detroit's proximity to Chicago, Matt and Mo's is among few Italian beef shops to have ever opened here. It's unclear why certain regional dishes stay within their region's borders and some edge toward national staple status — consider the number of bowls of Cincinnati-style chili that can be found here compared with the cheesesteak's ubiquity — but Matt and Mo Marzullo, the Chicago transplants and husband-and-wife team behind the shop, which opened in Doug's Delight's building, prove themselves to be worthy ambassadors.

As with the best regional food dishes, the Italian beef is not quite as simple as its facade might suggest, and its details, which Matt and Mo's nails, are what gives it its subtle depth.

The sandwich is centered around a big stack of slow-roasted, sheet-thin folds of beef that are rich and full of body from being dipped in jus, then stacked on a French roll with roasted sweet peppers and acidic punches from giardineria, an oily mix of pickled hot peppers and vegetables. Though it's not required, the entire package should be dunked in the jus and held until it's soaked through. At its best, the Italian beef is a deep, balanced package of complementing notes and textures, and also perhaps the most chaotic sandwich under the sun.

It's born out of a huge cut of top round — Mo's does about eight hunks totaling up to 300 pounds in a sitting — that's slow-roasted at a low temp for hours above a tray that collects the dripping juice. The cut is important — top round is a lean, cheap piece of meat that's tough if it's not prepared correctly, but properly done Italian beef is tender. The cheap cut is also part of why they come at a low price point — at $10.50 for a monster sandwich, Matt and Mo's is a bargain. After the round is roasted, it sits overnight before it's cut sheet-thin to help keep it tender, which back in the day was also a strategy designed to stretch the dollar.

The slices then take a short dip in the jus — not too long, or it'll toughen — before the dripping meat is placed on a roll with roasted peppers and giardineria, and the whole package is dunked in jus, which represents another pitfall. Only the most absorbent buns can be dunked in jus and not disintegrate, and Mo's uses Toronto brand triple-gluten French bread. One can also order it without the final dunking, or ask for the jus to be ladled on, which will require fewer napkins.

I lived in Chicago many years ago and can say with some authority that Matt and Mo's is doing it right, and their Italian Beef sandwiches can hang with the best of the Windy City.

Beyond the sandwich, they make an excellent Italian sausage that comes with sweet peppers, and we also got ours with provolone cheese and a side of marinara. The "combo" Italian-beef-and-sausage sandwich is for those who can't make up their minds, though I say just order one of each. Mo's Chicago dogs are what they should be — sport peppers, tomato slices, diced onion, neon green relish, pickles, celery salt, and mustard all on a poppy-seed bun and atop a dog that snaps when you bite it. It's a straightforward dish, but some restaurants do standards better than others, and Mo's is up there.

The biggest surprise of the meals was the fries with gravy. Matt takes his jus, adds a roux and beef bits, and makes a gravy so mind-blowingly rich and perfectly salty that I'd be willing to glug it straight out of a jug if it were socially acceptable. But I'll settle for having it on thin-cut fries. The poutine is the same, except with cheese curds, and we tried to order the sriracha 1000 fries with green onions, but were given sweet-potato waffle fries instead.

One orders sandwiches and eats at picnic tables or takes it home. The Marzullos bought the business from former owner and current Mable Gray chef James Rigato, who still owns the building, with the agreement that they also run Doug's Delight. Rigato had saved the beloved ice-cream spot from closing several years ago, and, after several years in a food truck, Matt and Mo took over last spring, creating one of the region's most original spots.