Detroiters interested in getting in on the city's long-awaited recreational marijuana business program were given the green light on Wednesday when Mayor Mike Duggan unveiled the application process and timeline, as well as some additional resources for those eager to launch their canna-businesses.

“This has been a divisive issue in this city, even though voters in Detroit and in Michigan overwhelmingly approved the legalization of marijuana,” Duggan said Wednesday, acknowledging opposition to allowing marijuana businesses.

But Duggan said they didn't want to leave Detroiters out of the blooming industry.

The program launch comes just two weeks after Detroit City Council unanimously approved an adult-use recreational marijuana ordinance that follows suit with other communities in the state that have opted-in for recreational cannabis sales, but also goes one step further with provisions to help Detroiters get in on the business.

Councilman James Tate, who introduced the legislation — and dedicated the marijuana victory to DeAndree Watson, an influential council staffer who was shot and killed in July — said on Wednesday that he was impressed with how the city's many departments worked together in getting Detroit ready for what he describes as being a “very huge lift.”

“We know it's going to be heavy. We know we're going to have a lot of scrutiny, a lot of eyeballs on us,” Tate said. “But there's a lot of people who are pulling together ensuring that the industry ends up looking as we all want it to be one that is, designed to benefit Detroiters, generate generational wealth for many years to come, as well as understanding that it's an industry that is brand new in the city of Detroit and has an opportunity to make sure that it works on behalf of the residents.”

As part of the program, the city launched DetroitMeansBusiness.org, a new resource portal for interested applicants that outlines key dates and other info for Detroiters wanting to start a marijuana business. 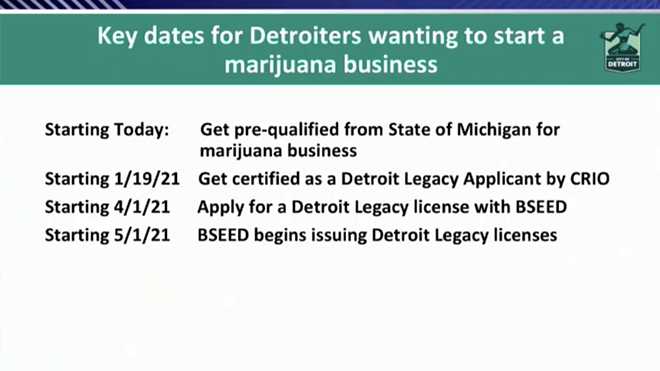 In total, the city will grant 75 licenses for adult-use retail businesses, or about one recreational marijuana shop per two-square miles of the city. The city will also grant unlimited licenses for growing, processing, transport, and safety compliance facilities, as well as unlimited marijuana event companies and events.

Designated consumption lounges, which Duggan said can host live music and other non-alcoholic offerings, and microbusinesses are allotted 35 licenses each.

Duggan recommends interested Detroiters start as soon as possible by first getting pre-qualified from the State of Michigan for a marijuana business by visiting Michigan.gov/mra, which requires a $6,000 fee that will be drastically reduced through the state's social equity program. This must be done before seeking certification from the city.

Duggan notes that individuals can start the Detroit certification process even if their state pre-approval has not come through, but both are needed to be approved for a Detroit license.

On April 1, people can then apply for "legacy" business licenses. To do so, individuals must supply an application fee of $1,000 or, for legacy applicants, just $10, a detailed business plan, and three years of tax returns; authorization of a background check, property tax, and blight clearances; and the address of the proposed business site. (If you don't have an address yet, your city approved provisional license will be valid for up to one year so as long as the city hasn't reached its 75 approved license capacity, which Duggan says is “very unlikely.”)

On May 1, the first Detroit legacy licenses will be issued.

Detroiters are also given an advantage when it comes to purchasing city-owned property properly zoned for their cannabis business. These properties can be purchased with a “75% discount of fair market value.” The city will launch a website featuring available properties in 2021.

Duggan admitted the efforts to prioritize Detroiters in the city's new recreational cannabis industry was "controversial" and met by "tension" from businesses outside of the city. But he said he and Tate believed it was the right thing to do.

“[At] the end of the day, the fairness of this provision won out: the city will not issue a license to any business unless 50% of the licenses in that category are to Detroiters,” Duggan said. “This means if you're outside the city, you can't get a license unless a Detroiter already has one. We'll never go below 50%.”

He added, “It's a pretty unique provision nationally, we're confident it will hold up legally. And I think at this point, even those who were skeptics have come to see that this is pretty reasonable.”