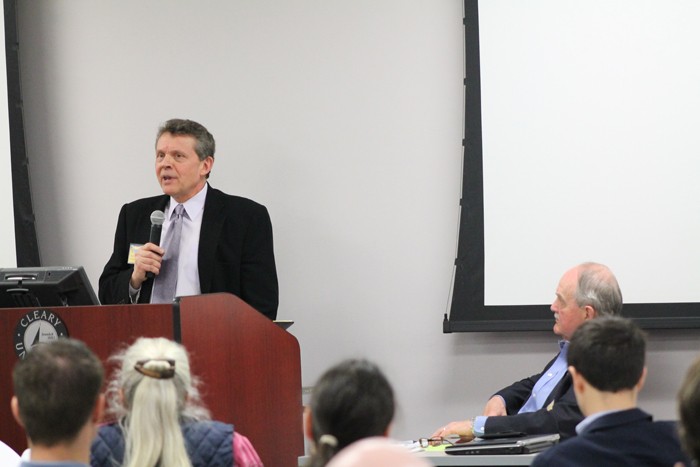 Campaign finance watchdogs were up in arms last week, as the U.S. Supreme Court decided to strike down a cap on total individual political contributions to candidates running for federal office.

The court’s narrow 5-4 ruling in McCutcheon v. the Federal Election Commission follows a series of recent cases, such as 2010’s Citizens United decision, that have increased the role money plays in the political process. Surely, someone like billionaire Amway founder Dick DeVos was pleased by the outcome.

As explained by the good people at the Michigan Campaign Finance Network, the Court’s decision further chips away at campaign finance laws established post-Watergate. Now, as Justice Stephen Breyer wrote in his dissenting opinion, the McCutcheon decision “may well open a floodgate,” as the ruling allows donors to contribute to as many candidates, party committees and PACS as they please.

Speaking at the 2014 Michigan Election Reform Conference at Cleary University in Ann Arbor last Friday, the campaign finance watchdog’s executive director, Rich Robinson, laid out the ramifications. Under the new ruling, for instance, Dick and Betsy DeVos, along with the other seven members of their family, would be legally allowed to fork over $57.7 million in one two-year election cycle.

Before the McCutcheon ruling — when the total an individual could give to candidates, national party committees and certain political committees was capped at $123,200  — the family’s influence would have stopped at $1.1 million. (The ruling upheld the $5,200 limit on contributions from an individual to a single candidate per election cycle, but struck down bans on aggregate limits for all candidates and political action committees.)

But the Supremes seemed loath to limit the biggest spenders. Chief Justice John Roberts in his majority opinion, equated political donations with free speech, finding the cap in violation of the First Amendment.

What’s more, the decision appears to cater to a sliver of society: Only 591 people hit the maximum limit for federal candidates, $123,200, in the 2012 elections, according to an analysis by the nonpartisan Center for Responsive Politics.

As Robinson described it, the ruling would empower joint fundraising committees to act as clearinghouses for the likes of the DeVos family, among other super-rich 1 percenters.

Such committees will likely go from minor players to key organizations in the 2014 election cycle and beyond. Reporter Paul Blumenthal described the changes we could see in a recent Huffington Post article, writing: “[The cap on aggregate contributions] limited the number of individual candidates that any one donor could support financially. But now a donor can give to as many candidates, party committees and PACs as he or she wants. This is where the joint fundraising committee comes in. These organizations act as recipients of money to be distributed to campaigns, political parties and PACs. They make it easy for the wealthy but busy donor to write one big check, which the joint committee will then split up among its participating candidate and party committees. … Now, a joint fundraising committee can link all candidates for federal office from the same party, their leadership PACs, and the appropriate national and state party committees together. This could net at least $4.5 million from a single donor -—with the likelihood of more depending on how many leadership PACs exist and are included.”

In essence, the Court’s decision effectively opened the door for roughly 600 people who actually had the cash to hit the previous limit to now spend freely.

Speaking before a room of roughly 75 who gathered to hear the daylong conference on ways to reform the system, Robinson posited that if, say, U.S. Rep. Justin Amash (R-Cascade Twp.) opted to start a joint election committee, DeVos could use that committee to lavish donations upon their favored federal candidates, and, in doing so, increase the Tea Party lawmaker’s standing inside the Beltway.

So, Robinson asked the crowd, “My question to you is: Is that enough to corrupt? Can that make Justin Amash the chairman of a congressional committee?

“I think it’s plenty to corrupt.”

And it doesn’t necessarily stop there. Even then, Robinson tells the Hits, in additional to the DeVos family’s potential impact through a joint fundraising committee,the family could still give an additional $5,200 a year to an unlimited number of political action committees.

“This is just the most obvious piece of [the McCutcheon ruling],” Robinson says, addding, “[Another] advantage of direct contributions is that you seem to get more leverage. Contributions to nonprofits have the advantage of anonymity.”

Michiganders could see the impact of McCutcheon immediately: This fall features more than a dozen U.S. congressional races.

“The number one problem with things is money compromising people’s decisions,” Grady, 61, told the Hits.

Earlier, during a question-and-answer session following Robinson’s presentation, Grady spoke more candidly about her concerns: “I’m not very experienced with this, but this is really hopeless to me … To me, it seems it’s going to take three generations … to roll back what happened this week.”