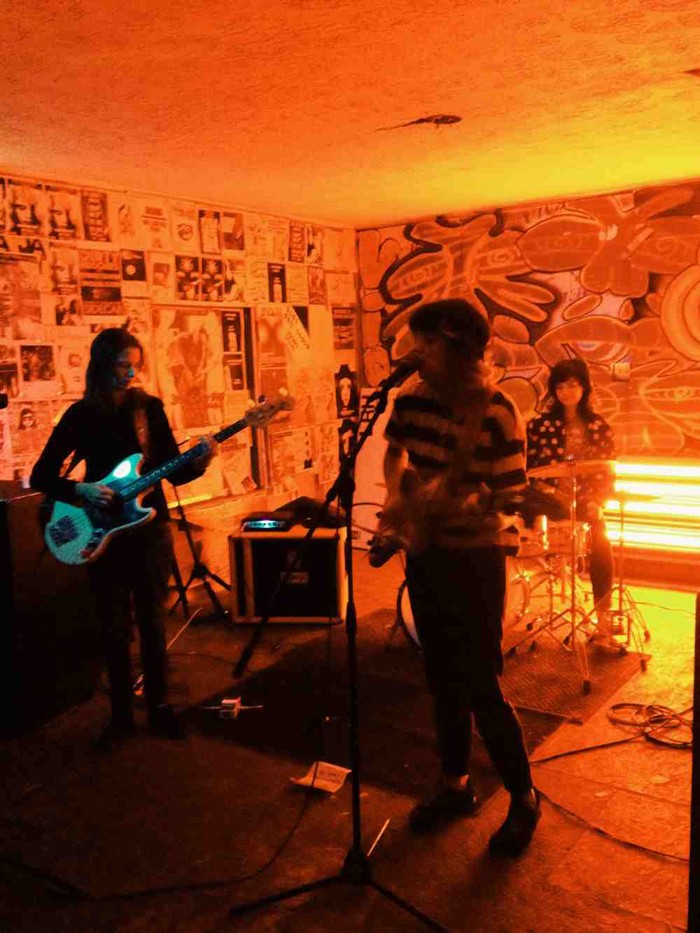 Autumn Wetli is the singer and guitarist, and she leads a band composed of bassist Shelley Salant and drummer Amber Fellows. You might recall Wetli from her collaboration with Jules Nehring in Ypsilanti-based psych-rock outfit Bad Indians. Wetli was that band’s drummer, backing vocalist, and founding member, but moved on recently so that she could fully realize her own project, Rebel Kind.

Metro Times: So let’s start at the start. You were almost going to call Bad Indians “The Rebel Kind” initially?

Autumn Wetli: We made a demo under that name, but we didn’t stay with it. Later, I was writing softer, mellow songs that didn’t really fit with the aesthetic of Bad Indians. Eventually, I dropped the “The” because I found it annoying. Bad Indians played Lutherfest in the summer of 2012, I think, and I was able to get on the bill as Rebel Kind, and Jules played drums with me.

MT:  What were the aesthetics of Bad Indians and Rebel Kind, respectively, from your perspective? And can you name some primary influences?

Wetli: That’s a really hard question. Cat Power was the first musician that made me think I could write songs, and Frankie Rose’s drumming on the first Vivian Girls album made me want to play drums. I like all sorts of music at all different times in my life, so it’s hard to think of my music having a certain “aesthetic” other than just being pop music or rock ’n’ roll. I always love pop music, and I always think of my music as pop.

Wetli: People used to write reviews of Bad Indians and say we needed to “pick a sound” or that it was too all-over-the-place. But, then, we had four different people writing and singing. Still, who wants to keep making the same record over and over? At every show, people tell me that Rebel Kind reminds them of different bands, and I think that’s really neat. Sometimes I write thinking, “I’m going to write a song that sounds like this song” or whatever my favorite song of the moment is, but it never ends up sounding like that. It always sounds like an Autumn song to me.

MT: Let’s talk about Today, which you released two months ago and recorded with Fred Thomas (of Saturday Looks Good to Me).

Amber Fellows: I feel the full band version of Rebel Kind’s been carefully germinating into some hopeful sprouts and shoots this last year, and that Today reveals the first blossoms.

Shelley Salant: It was a really fun experience; we recorded at Fred’s house. We added things that we don’t do in our live set — handclaps and other percussion stuff and vocal harmonies in the songs, which we’ve started incorporating into the live set.

Fellows: We recorded in a day-and-a-half and mixed in less time than that. In the fury of creation, just about every idea was accepted, as long as it was kind of bizarre. Recording with a little disorder or anarchy is exciting to me. I think we found a way to fray the tape with Today. We split between tape and digital recording as a simple way to find diversity of sounds from the same instruments.

Wetli: Fred’s the best and easiest person to work with. I feel like he gets my music. It’s hard for me to record and mix because I feel there’s infinite ways a song can be executed, so it was nice to have Shelley, Amber, and Fred to contribute and bounce ideas around with. It was a lot of fun, and I [felt] so proud of everybody afterward. It felt amazing to hear how beautifully everybody nailed the songs.

MT: Amber, Shelley, can you talk about how you first encountered Autumn’s songs when she started out back in late 2012?

Fellows: I was always interested in Autumn’s work with Bad Indians. I came across [Rebel Kind’s 2013 debut, Some Things Were Just Meant to Change] in the final winter of working on my degree, listening to it on study breaks. Her songs had a particularly sharp point of view that captured levity in sad times, like paranoid laughter in the dark, that I related to.

Salant: We’d been friends, and I was just immediately drawn to Autumn’s songs in Bad Indians. She has such a unique style, very dark but also very pop. I’ve always wanted to be in a band with her, and Amber’s one of those people who can pick up any instrument and be amazing at it.

MT: How has the collaboration evolved over the last year?

Fellows: Autumn writes signature transitions that took us a few times to feel out at first, but now they happen like second nature. Shelly’s such an experienced and longtime creative partner of mine, so we’re synced in any instrument combo. And Autumn is at that pop-song savant status, I think, while being prolific and completely herself; a total pop technician.

Wetli: I feel really lucky I’ve gotten so close to them. They’re awesome friends to have.

MT: Autumn, did you grow up around Ann Arbor? What’s your take on your hometown scene, and how has it influenced you?

Wetli: I grew up in the country in southeast Michigan, near MIS Speedway. I went to U-M. The “scene” I know ebbs and flows. It is what it is, but I feel lucky to be surrounded by so many great and talented friends.

MT: What are the future plans for Rebel Kind?

Wetli: We’re playing Urinal Cake Records’ Urinfested II and June 19 at Dreamland Theater in Ypsi with Bad Indians and working on putting Today out on vinyl and doing a little tour for that.