Meet the women of Michigan brewing 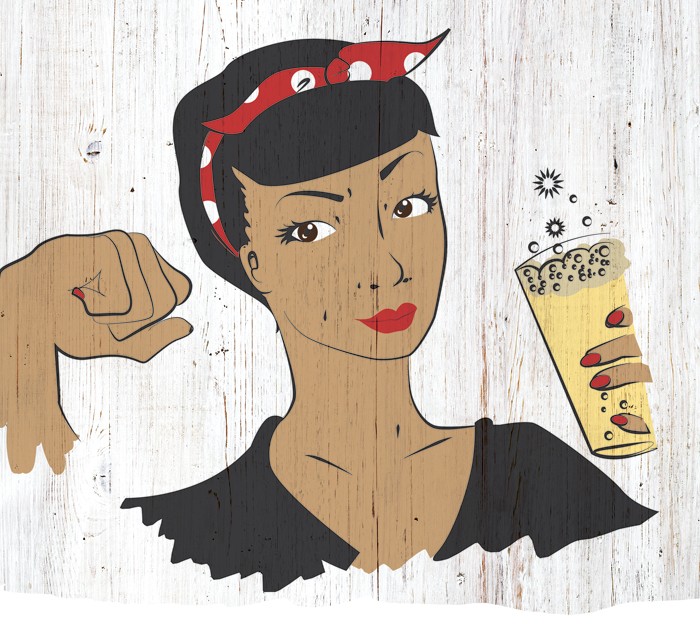 Is Michigan’s craft beer industry a boys club? It’s a question we posed to six women who work in the field.

They all answered yes.

They all also told us of the industry’s inclusive nature, that they’ve always just been one of the guys, and that the landscape of the craft beer world is changing.

“It’s gender-irrelevant,” says Annette May, the state’s first woman to become a certified cicerone (the sommelier of beer).

Yet, the field remains male-dominated. Whether in the number of bodies crafting the beer or the mindset most have when it comes to who appreciates it.

“A lot of times when I’m at a beer event the questions that are asked are directed at men. People will ask me if I’ve been hired to come work the event,” says Laura Bell of Bell’s Brewing.

But May’s statement seems pretty cut-and-dried. She says she started working in the industry almost 20 years ago and that she’s always felt very accepted by her male peers.

“It’s all about being educated,” May says.

Yet, she’s in the process of forming a women’s-only trade group along with a host of other women who work in Michigan’s craft beverage industry.

Fermenta, a fledgling organization for women who work with craft beer, wine, cider, mead, and spirits, is still in its infancy. It began with a small meeting of women at Arbor Brewing Company in late April with the purpose of finding ways to help encourage women to join the industry. A press release on the Michigan Brewers Guild website states that the group is committed to diversity, camaraderie, networking, and education within the craft beverage industry.

Though it doesn’t yet have 501(c)3 status, it’s operating as a nonprofit that will network and educate within the craft beverage industry. They already have two events on the books, including their launch at the Michigan Brewers Guild Summer Beer Fest on Friday and Saturday, July 25 and 26, at Riverside Park in Ypsilanti.  There they will be serving 12 beers that were made in collaboration with the 12 breweries that are involved with the group: Arbor Brewing Company, Boatyard Brewing, Cotton Brewing Company, Dragonmead Microbrewery, Fenton Winery and Brewery, Griffin Claw Brewing Company, Pike 51, Saugatuck Brewing Company, Short’s Brewing Company, Unity Vibration Kombucha Beer and Tea, Witch’s Hat Brewing, and Wolverine State Brewing. Each of the beers will be available at the table of the brewery at which it was brewed. Representatives sporting Fermenta shirts will be there to educate drinkers on both the beer and the new group.

The second event, dubbed Welcome to Fermenta, will be more introductory in nature, welcoming women to join the group, learn, and network. It will be held at Witch’s Hat Brewing in Midland on Aug. 24 from noon to 4 p.m.

While the organization will only permit women to join, May says its events will welcome both genders. Also, women from any part of the craft beverage industry are welcome to join the group, whether they take part in making beer, wine, cider, or spirits.

“It’s one of my personal and professional goals to help women break into the brewing industry,” May says. “It’s an area that’s growing and attracting more and more people. I think more and more women are getting involved with home brewing, which leads them to look for jobs in the industry.”

Unaffiliated with a brewery, May works at Merchant’s Fine Wine, where she gives patrons advice on beer and food pairings. She’s an example of an auxiliary worker in the beer industry, of which there are many, such as hop farmers, many of whom, she notes, are women.

“People don’t realize how many women are involved in the industry,” May says.

Rachel Kanaan, co-owner of Unity Vibrations Kombucha Beer and Tea, says the new organization is helping women in brewing to find each other.

“I think there are women in brewing, you just don’t hear about them. With Fermenta, they’re popping out of the woodwork.”

But not all women working in the craft beverage industry are interested in special groups just for their gender. Bell, daughter of Bell’s Brewing founder Larry Bell and the brewery’s vice president, says she feels segregating the sexes only creates an exclusive atmosphere.

“I want to be successful because I’m good at what I do, not because I’m a woman,” Bell says. “But I do think it’s important to have different resources, especially for women who are consumers.”

While growing numbers of women are entering the job force in the craft beer industry, few do the actual brewing.  It’s a labor-intensive process that requires a lot of heavy lifting and some say it’s a job that women just aren’t cut out for.

“You have to have a lot of physical strength,” May says, noting that women often are just not as strong as their male counterparts.

“It’s not a pretty job,” says Kristy Smith, a co-owner of Royal Oak’s MillKing It Productions. “You’re lifting heavy bags of grain, it’s a very physical job. I fell in love with every aspect of the craft brewing industry except that.”

But for women who love the task of brewing beer, they always find a way.

Roth has been brewing for a couple years now; as of late she’s cellaring for Griffin Claw. She started out bartending at the now-defunct Michigan Brewing Company, where she met Griffin Claw’s brewmaster Dan Rogers, and spent time working at another local brewery. She’s always had to figure out ways to make the job work for her.

“When I interviewed at Grizzly Peak, they asked me if I could physically handle it. I said, ‘I guess we’ll find out.’” Roth says. “I’m naturally strong, but you have to move, you have to figure out how you can move these bags of grain. The way I do things is different from the men around me.”

Kanaan also notes that women can do anything men in the industry are capable of; they might just have to find another way.

“I think some woman use that as an excuse,” she says. “I don’t think it has anything to do with being male or female. If there is a woman who really wants to do it, she can do it.”

Kanaan herself did some of the brewing when her company was smaller.

“Did I really like it?” she asks. “Not especially, but I did enjoy the smell and the recipes and the readings.”

Bell, who is only two months older than the brewery she works for, has done every job available at Bell’s.

“I’ve worked in every department of the brewery,” Bell says. “I might have to use a lift [while brewing], but if that’s what I have to do, I do it. You figure it out.”

Whether they’re doing the brewing, creating packaging, being the head of marketing, or in charge of cellaring, women seem to be joining the craft beer industry’s work force en masse. Women who’ve spent decades working with craft beer seem eager to mentor and tutor their more novice counterparts.

Arbor Brewing Company’s Rene Greff has been working in the craft beer industry as long as May. She opened the Arbor Brewery Company with her husband in 1995, and has watched the local trade grow from a small, niche community to a nation-wide industry of 3,000 businesses.

“Now, there is a really wide diversity of women getting involved,” says Greff. “The movement is growing and craft beer really appeals to women.”

With more sophisticated palates and senses of smell, Greff says many women appreciate the extensive and exciting flavor profiles available with craft beer.

Their inherent ability to enjoy beer is complemented by other instinctual behaviors, according to Greff.

“Women by nature tend to be more collaborative. They bring a fresh perspective and creativity because they aren’t as constrained,” she says. She’s not one to pigeonhole women and their contributions to the industry, however. “We have female scientists who bring an amazing skill set, while others bring creativity. Our management team is dominated by women. I’ve made an effort to mentor these women in my organization.”

Yet, the craft beverage industry remains a man’s game. Most of the women we spoke with noted they’d been treated fairly in their respective jobs, and a few had small incidents of feeling bashed or put down for being a woman, others noted that some industry job interviews required them to lift bags of grain so massive that even their male counterparts weren’t capable of it. Others experience stigma for being too tough.

“I know there are women who’ve had problems,” Smith says. “Some females are very hardnosed and they’re considered the bitch in the industry. You have to laugh at all the [men’s] jokes and I can hold my own. I had to walk a fine line in the beginning because I didn’t want to be put in a category. Now I use the fact that I’m a woman to sell more beer. I think I have such an advantage being a woman. People see I’m a woman and I really know what I’m talking about and they pay attention.”

Bell experienced different struggles, considering she was the boss’s offspring.

Kanaan says she’s faced less adversity for being a woman as well, as Kombucha beer is a niche within a niche industry. “We’ve created a new segment that was unheard of before. We’re the first in the country,” she says.

Nonetheless, the microbrewery recently earned some well-deserved chops thanks to Kanaan. Draft Magazine named one of their brews to a list of the top 25 in the country.

“It was my recipe,” Kanaan says. “It was validating in a lot of ways.”

Other women, such as Roth, have had totally different experiences.

“Everyone in the industry is so nice. I never even thought about being a woman. The biggest hurdle I had was being short,” she says.

Smith, Roth, Greff, and Kanaan all noted that they were tomboys growing up and have always felt very comfortable around “the guys.”

Smith, who got her start bartending and selling beer for MillKing It’s predecessor, has experienced nothing but a little scoffing in her early days, but that was from a woman.

“When I first started selling craft beer, I was 23 and I really didn’t know anything,” Smith says. “I remember I was selling beer at an event, and a woman came up to me and asked what the ABV was on the beer. I had no idea what the term ABV meant. Turns out it was Annette May from Merchant’s Fine Wine. She scared the crap out of me.”

Smith’s tale harks back to the importance of education, something the industry is always eager to dole out.

“I think the Michigan industry is really accepting of all brewers. There is such camaraderie. There’s huge acceptance, and a lot of old-school brewers put it out there that it’s about respect,” says Smith.