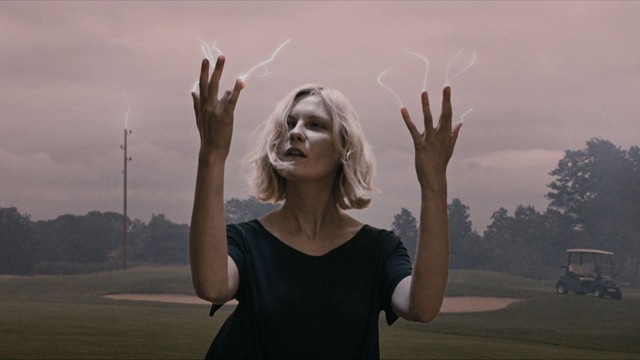 When one of the film's protagonists proclaims, "The earth is evil. No one will grieve for it," you know you're in for rocky seas. In fact, the first eight minutes of Lars von Trier's film is a visually ravishing series of apocalyptic postcards. Dead birds fall from the sky like black snow, a mother clings to her child as her feet sink into the melting lawn of a golf course, a bride is snared by ominous vines in a shadowy forest. These unsettling and exquisitely composed images — metaphorical tableaus for the crippling depression that plagues the filmmaker — are set to the mournful prelude of Richard Wagner's "Tristan and Isolde," whose final crescendo provides a soundtrack for the immense planet Melancholia, as it smashes into the earth, shattering our existence into thousands of lifeless pieces.

The destruction of all life has never been rendered with more operatic beauty or cruel finality.

What follows is a more terrestrial examination of depression, centered around a pair of sisters. Divided into two reflective halves, von Trier's movie first follows Justine (Kirsten Dunst), a bright young advertising copy editor, who, with her new husband (Alexander Skarsgård), has arrived late to her wedding reception held on the incredible country estate of her sister Claire (Charlotte Gainsbourg) and husband John (Kiefer Sutherland). Shooting on handheld digital video, von Trier returns to his Dogme-95 style for the black-humored celebration, an affair dominated by dysfunctional parents (Jon Hurt, Charlotte Rampling), a despotic boss (Stellan Skarsgård) and Udo Kier camping it up as a prima donna wedding planner. Making matters worse, Justine is a self-destructive manic-depressive who keeps disappearing from her reception to take a bath, screw a guest, and obsess over the strange star that's appeared in the night sky.

This section of the film is the liveliest von Trier has been in years. Extracting black humor and mercurial sadness in equal doses, the family dramas and confrontations are handled with deft assurance. Dunst expertly constructs the cheery facade that Justine must present — even as her psyche is scarred by unrelenting despondence. There is little doubt that the cherubic actress has become the conduit through which von Trier has chosen to express his own emotional madness. Using a microscope rather than a telescope, he makes that darkness an absurdly intimate experience. But his characters, even Justine, are thinly developed types that convince with their attitudes and emotions but never express their souls. In the end, they are merely ants, ready to be scorched into von Trier's thematic cinders.

The second half of Melancholia focuses on Claire, as she struggles to care for Justine (who has completely succumbed to depression), while putting a lid on her growing panic. You see, that strange star has revealed itself to be a planet that has become unmoored from its orbit on the other side of the sun, and may be on a collision course with Earth. Despite her husband's reassurances that Melancholia will pass harmlessly by, paranoia, thoughts of suicide, and despair for her son's fate overwhelm Claire.

It's clear von Trier tries to make the case that Justine and Claire are two sides of the same coin — the nihilist who rejects sentiment while embracing the godless chaos of death, and the humanist who desperately clings to the rituals, emotions and relationships that define human existence. As Justine nakedly basks in the brilliance of Melancholia's damning light, Claire grieves for what might be lost.

It's pretty schematic stuff. And grandiose to boot. Clearly, von Trier has never been capable of subtlety, and his bullying depiction of doom often crosses over into the sadistic. His films ask us to empathize with their condemned characters even as they relish the act of torturing them.

Still, there's no denying the malicious foreboding von Trier creates. The film unsettles in ways that can't be dismissed with snarky asides about bombast and self-indulgent angst. In the Danish filmmaker's world, life, death and mental illness demand all the love you can bring. And it won't be enough. Melancholia is more than just a florid and ham-fisted metaphor, it's a fevered and bitterly romantic attempt to pull you into the all-encompassing, existential dread that infects von Trier's psyche.

Had he used that experience to challenge us to live life more fully, rather than declare us unworthy and burn us in effigy, his cinematic monument to extinction might have achieved a kind of transcendence. Instead, it offers only unforgiving yet aesthetically gorgeous scorn.