Cupid's Undie Run
2019 TBA; Detroit; cupids.org
The only time of year that running around in your underwear won't get you arrested. The Cupid Undie Run is both a charitable event and a cheeky one.

Marche du Nain Rouge
March 25 from noon to 3 p.m.; Detroit; marchedunainrouge.com
It's only fitting that a city as unique as Detroit would host such a devilish event. Marche du Nain Rouge, though the new tradition on the block, is a blend of Mardis Gras and mythology as the city rallies together to banish the dreaded Red Dwarf.

FoolMoon and FestiFools
April 6 and 8; Ann Arbor; wonderfoolproductions.org
On FoolMoon, the streets of Ann Arbor are invaded with illuminated costumes and contraptions. On the sister event, FestiFools, a "flash mob" army of papier-mache puppets takes to the streets for one kooky celebration.

Stratford Festival
May-October; Ontario, Canada; stratfordfestival.ca
OK, so it's not in Michigan but thanks to our neighbors to the North-ish for putting on dozens of plays each year with an emphasis on Shakespeare. The Stratford Festival is North America's largest repertory theater company.

Movement Music Festival
May 26-28; Detroit; movement.us
It's all the rave! Lovingly referred to as "Techno Christmas," the Movement Electronic Music Festival draws fans and DJ's from all over the world. Considering Detroit is the undisputed capital of electronic music, there's only one place you should be Memorial Day weekend. 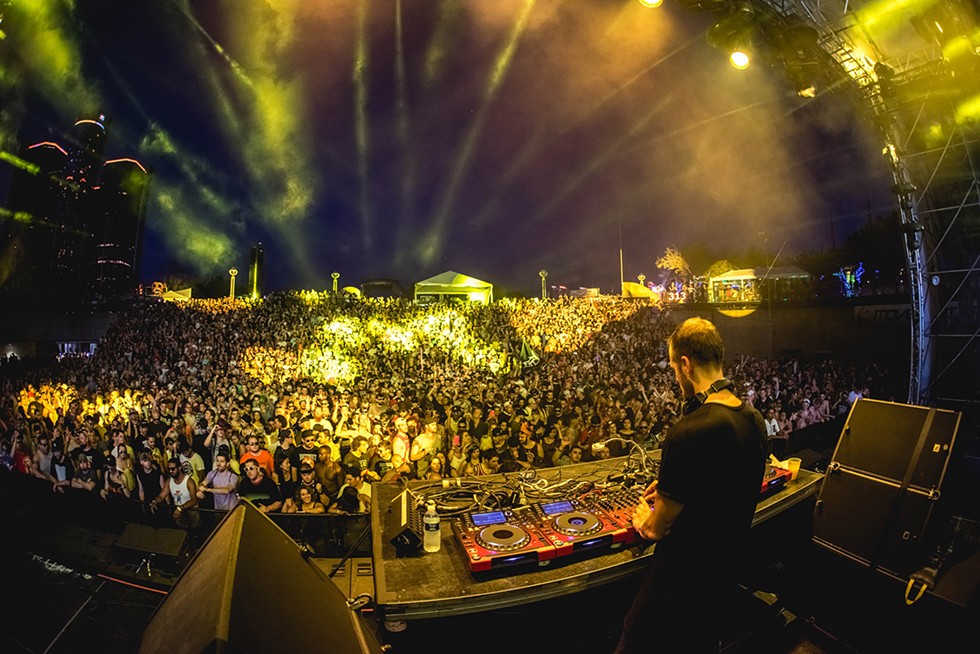 Ferndale Pride
June 2; Ferndale; ferndalepride.com
Hoist up those rainbow flags, Ferndale Pride is taking over. The event is the ultimate celebration of our local gay, lesbian, bisexual, and transgender communities.

Hoedown
June 1; Clarkston; wycd.cbslocal.com
Hey, y'all. Brush off your cowboy boots and brush up on your two-step, the annual Hoedown returns. Full of country-fied entertainment and vendors galore, the Hoedown ropes in thousands of bumpkins.

Motor City Pride
June 9-10; Detroit; motorcitypride.org
Let your pride flag fly! As Michigan's largest pride event, Motor City Pride turns up with an average of 40,000 participants to celebrate the LGBTQ community with a blowout like no other.

Electric Forest
June 21-24 and June 28-July 1; Rothbury; electricforestfestival.com
Once again, a psychedelic neon hippie commune is erected in rural Michigan featuring electronic music, jam bands, and a literal electric forest for all of your tripping needs.

GM River Days
June 22-24; Detroit; riverdays.com
The Detroit riverfront comes alive with music, special events, food, and plenty for the kids. It's also a great way to see how the city's RiverWalk has transformed the waterfront over the last 15 years.

Michigan Elvisfest
July 6-7; Ypsilanti; mielvisfest.org
If you can't help falling in love with "The King," Elvisfest is for you. Celebrate the hunk of burnin' love with some of the country's best Elvis impersonators.

Wyandotte Street Art Fair
July 11-14; Wyandotte; wyandottestreetartfair.org
It's all going down — Downriver that is. The walkable art-filled event annually enlivens the heart of Wyandotte.

Pig and Whiskey
July 13-15; Ferndale; pigandwhiskeyferndale.com
Name a more iconic duo. Pig and Whiskey offers up some of the area's best barbecue joints paired with whiskey, beer, and a music lineup that is sure to keep you roasted.

Motor City Steam Con
July 13-15; Romulus; motorcitysteamcon.com
Put a clock on it. The Con serves up the ultimate steampunk experience.

Dally in the Alley
Sept. 8; Detroit; dallyinthealley.com
Celebrate the spirit of the Cass Corridor as a historic block is cordoned off to make way for multiple stages, vendors, artists, and libations.

Art & Apples Festival
Sept. 7-9; Rochester; pccart.org
The city of Rochester transforms the 30-acre Rochester Park into one of the nation's top fine-art fairs with over 290 exhibiting artists from across the country.

DIY Street Fair
Sept. 21-23; Ferndale; diystreetfair.com
You can do-it-yourself without doing it alone thanks to the DIY Street Fair in Ferndale. Live music, food, and vendor booths hawking all manner of art.

Theatre Bizarre
2018 TBA; Detroit; theatrebizarre.com
The freaks come out at night — well, technically they come out for two weekends every October as the Masonic Temple is transformed into a wicked wonderland, and the "Greatest Masquerade on Earth" commences just in time for All Hallows' Eve.

Detroit Urban Craft Fair
2018 TBA; Detroit; detroiturbancraftfair.com
This well-established craft fair is absolutely enormous and, arguably, the best of the bunch based on its sheer size. It usually takes place at Detroit's Masonic Temple for two days in early December.

Noel Night
2018 TBA; Detroit; noelnight.org
All is calm, all is bright. Welcome to Detroit's beloved Noel Night. Catch carolers, ice sculptors, horse-drawn carriages, all while checking your list (and checking it twice,) because, yeah, the shopping is out of this world.

Motor City New Year's Eve Drop
Dec. 31, Detroit; motorcitynye.com
It's the final countdown — of the year, that is! Celebrate New Year's Eve Detroit-style with the dropping of a giant illuminated "D" and a party you will want to remember but probably won't (thanks a lot, champagne).