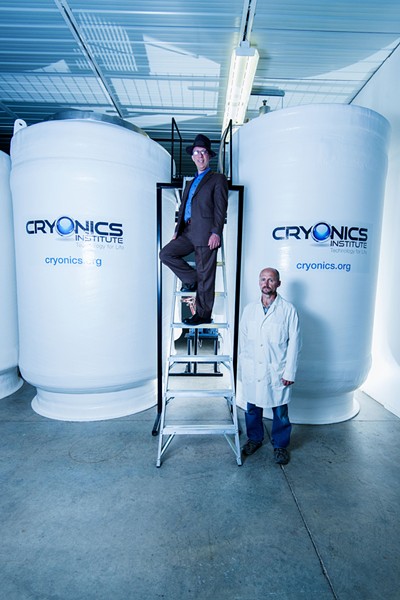 Photo by Doug Coombe Joe Kowalsky and Andy Zawacki with the cryogenic tanks where frozen bodies are stored.

Photo by Doug Coombe Joe Kowalsky with photos of patients who’ve been frozen by CI.

Inside the brick-fronted warehouse in Clinton Township, the body count has topped 100, not counting a small menagerie of pets — cats and dogs, mostly, and a few birds. Nestled inside Wal-Mart sleeping bags, the bodies stand upside-down within 10-foot-high tanks resembling immense white thermos bottles. “Technology for life” reads the logo emblazoned on their sides. The tanks are filled with liquid nitrogen, lowering the temperature inside to -321 degrees Fahrenheit.

This is the Cryonics Institute, and the people in those tanks — “cryostats,” they’re called — after being declared dead, have had their bodies frozen in perpetuity in the belief that future science may be able to thaw them, cure their ills, and, just maybe, return them to youthful vigor. They’ve made a bet: that in a time yet to come, they’ll rise again, with “death” only a temporary and reversible embarrassment easily remedied by medical know-how.

“We’re not trying to bring people back to life. We don’t believe they’re really dead; if dead’s final, then they weren’t dead,” says Dennis Kowalski, president of the Cryonics Institute, which claims to have 1,100 living members worldwide. Members pay yearly dues of $120, or $1,250 for a lifetime membership, then about $28,000 when actually frozen. (In comparison, the average adult funeral in the United States costs about $8,000.) For many, life insurance benefits cover the preservation costs.

The overwhelming majority of members — more than 600 — are from the United States, where CI is among the best-known cryonics facilities and is a relatively short plane ride away. It’s difficult to estimate how many people undergo the procedure every year, given patient confidentiality requests and the lack of centralized record-keeping, but in 2013 the Cryonics Institute preserved five people — about an average year. Worldwide, the yearly rate is likely in the low double digits.

At 46, Kowalski has the stocky build and thick, dark mustache that practically obliges him to be a firefighter or paramedic. In fact, he’s both. He compares the institute’s work to what he does every day. “We’re an ambulance ride to a future hospital that doesn’t exist — that may or may not exist.” That, of course, is the gamble: that there’s a cure waiting on the other side of the deep freeze.

PHOTOS: Inside the Michigan Cryonics Institute Where the Dead Are Frozen for ‘Reanimation’>>

But death is a gray line, Kowalski says, and it’s always moving. What might have been terminal 150, 15, even five years ago is treatable today. Something as simple as CPR has saved countless lives; cardiac defibrillation — the “shock paddles” used to jump-start a stopped heart — has revived patients previously considered dead. What’s “dead” mean to medicine, other than a challenge? From that perspective, he says, a storehouse of frozen bodies is no more macabre than a heart transplant, a now-common medical procedure once considered grotesque.

Right now, though, cryonics is more like an in-progress medical trial. Advances in stem-cell research, nanotechnology, and therapeutic cloning give Kowalski and other cryonicists hope, but he admits there are no guarantees. Today’s frozen people are already dead, or “deanimated,” as some prefer; tomorrow’s helpful scientists will not only have to successfully thaw their “patients,” but return them to life. (And reunite them with their pets, though some are frozen out of generosity, their owners simply hoping to give their beloved animals more life.) That’s assuming, fingers crossed, that they’ve been frozen in a recoverable way, without too much tissue damage, and that they’ve been carefully maintained. Once thawed, they’ll have to be treated for being “dead,” by whatever methods would make that possible. And who wants to wake up alone in the future in a body already ravaged by time? Better to hope that a new, youthful body is waiting for you.

There are a lot of ifs, and Kowalski’s the first to admit there are no guarantees. (Being stored upside-down, for example, is a precaution in case of a liquid nitrogen leak: the heads, being closer to the bottom of the tank, would be less likely to prematurely thaw.) “This is in the most literal sense a clinical experiment, and we already know what happens with the control group,” he says, meaning those choosing more traditional postmortem options. “They’re worm food.” And maybe the cryonics bet doesn’t pay off, and you’re still worm food. So what? As he likes to say, cryonics can’t make you deader than dead.

Kowalski came to cryonics in the late 1980s, via a book called Engines of Creation, about the then-new science of nanotechnology. An entire chapter devoted to cryonics quoted Benjamin Franklin, who mused about being preserved in a cask of Madeira wine, then revived a century later to see how his experiment in democracy had panned out. Nanotechnology, the book suggested, was on the cusp of realizing that possibility — using tiny machines rather than fermented grapes. To Kowalski, preserving your body until it could be rebuilt seemed a pragmatic, reasonable bet against death. That led him to the Cryonics Institute.

By that time, cryonics had a storied history. Pulp mags had long told tales of suspended animation through freezing, but in 1964 Robert Ettinger, a physics teacher and occasional sci-fi author then living in Oak Park, published The Prospect of Immortality. In it, Ettinger began with one “fact” and one assumption, then vigorously extrapolated. The fact, he wrote, is that freezing could preserve human tissue indefinitely. He then assumed that medical science should be able to, eventually, solve every one of the human body’s failings. From those two points, he predicted that widespread cryonic preservation was inevitable, as everyone chose freezer-assisted immortality. Eventually, only eccentrics would refuse it.

With its scientific-sounding gloss on an enduring idea, the book was a hit, and Ettinger spread the word on late-night talk shows and in radio interviews. He made some converts along the way, and soon came attempts to prove out his vision. The first failed, leading to “worm food,” but on January 12, 1967, a psychology professor named James Bedford was successfully frozen in California. He’s still preserved today; reportedly, he remains in good condition. Among cryonicists, January 12 has become “Bedford Day.”

In 1976, Ettinger founded the Cryonics Institute to bring preservation to the masses. Affordability was a major objective, so the organization runs as a nonprofit, funded by dues from living members and investment proceeds designed to provide a steady income. (The CI website boasts that it’s the only cryonics organization never to have raised its prices, and that, adjusting for inflation, the cost has actually declined.) Ettinger’s mother, Rhea, died a year later and was the first to be stored at the facility. But low, low prices weren’t enough to attract the masses; she remained the sole occupant for nearly a decade.

The Prospect of Immortality unleashed Ettinger’s idea on the world, and cryonics facilities began popping up across the country. Few lasted. In 1979, a facility in Chatsworth, California, was revealed to contain nine badly decomposed bodies. The operator claimed that he’d acted charitably, trying to maintain the facility even though he had no way to pay for liquid nitrogen. Relatives of the deceased sued for fraud and won a hefty settlement. The “Chatsworth disaster” offered an object lesson, and stained the reputation of cryonics for years.