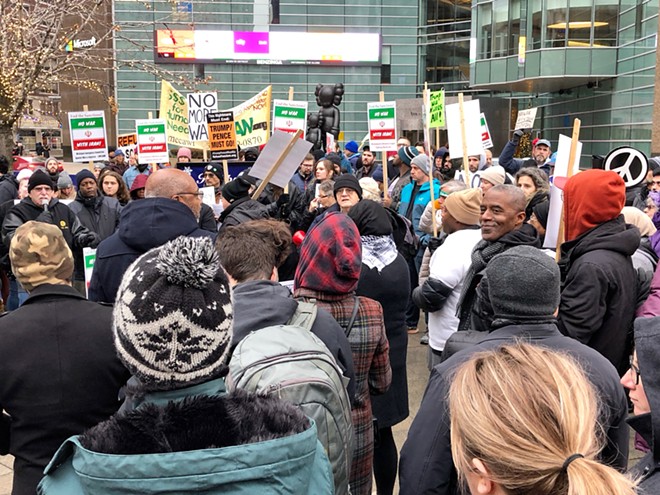 Hundreds of protesters gathered at Detroit's Campus Martius Park to speak out against war in the Middle East on Saturday.

"The drone strike in Iraq ordered by the Trump Administration is yet another reckless action made with no regard for the checks and balances set out by our Constitution," Tlaib said in a statement issued before the event. "Such provocative actions will put even more lives, both at home and abroad, in danger."

Rep. Rashida Tlaib speaks out against war in the Middle East in downtown Detroit.


"We have an entire generation of people and children who have only known a United States at war," she continued. "We cannot stay silent as this lawless President recklessly engages in actions that move us closer to yet another unnecessary war that will undoubtedly result in more bloodshed. The President is not a king and this is not a monarchy, this is a democracy. Therefore, as a co-equal branch of government and the body with the sole authority to declare war, Congress must clearly say no to war with Iran."

Other lawmakers spoke out against the airstrike on Friday.

"Qassim Soleimani was a brutal Iranian military commander who has killed many Americans and orchestrated countless terrorist attacks," Rep. Dan Kildee, D-Flint said in a statement. "Yet many Iranians and Iran’s hardline leaders will see his killing as a serious provocation that could incite additional attacks against American service members, diplomats and citizens abroad."

"Iran has already vowed ‘harsh revenge’ against the United States and could further escalate violence," Kildee continued. "It is important to remember that every foreign policy action we take has potential life-and-death consequences, and we must consider the short and long-term repercussions of such actions."

Time-lapse: Hundreds of protesters gather in downtown Detroit today to rally against war, chanting “No war for oil.” pic.twitter.com/GDXzwwxuQa

U.S. Rep. Justin Amash, a former Grand Rapids Republican who left the party after Trump became President, also spoke out against the act of war.

"There’s a reason our Constitution grants Congress the power to declare war: Every American may be intimately affected by a violent conflict," he wrote. "Soleimani was evil. But our system demands consent for war from the people, acting through their representatives and senators in Congress."

"As a former Shia militia analyst who served multiple tours in Iraq and worked at the White House under both Presidents Bush and Obama, and later at the Pentagon, I participated in countless conversations on how to respond to Qassem Soleimani’s violent campaigns across the region," Slotkin said.

"What always kept both Democratic and Republican presidents from targeting Soleimani himself was the simple question: Was the strike worth the likely retaliation, and the potential to pull us into protracted conflict?" she continued. "The two administrations I worked for both determined that the ultimate ends didn’t justify the means. The Trump Administration has made a different calculation. The Iranian government has vowed to retaliate and avenge Soleimani’s death, and could do so in any number of ways: against our diplomats and service members or high-ranking military officers, against our allies and partners in the region, or through targeted attacks in the Western world. It is critical that the Administration has thought out the moves and counter-moves this attack will precipitate, and is prepared to protect our diplomats, service members, and citizens serving overseas."

In 2011, Trump said President Barack Obama would start a war with Iran to get re-elected.

"Our president will start a war with Iran because he has absolutely no ability to negotiate," Trump said in a 2011 video. "He’s weak, and he’s ineffective. So the only way he figures that he’s going to get reelected — as sure as you’re sitting there — is to start a war with Iran."

The next presidential election is in November.