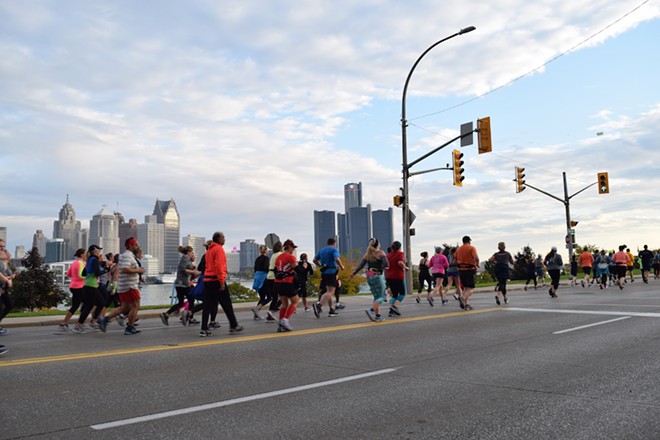 Diop Shumake is fired up.

The 26-year-old runner, cannabis advocate, and founder of Runner's High, an education-based organization that raises funds to further University of Michigan's cannabis research, is motivated and enraged by the national conversation surrounding athletics, cannabis, and the gatekeepers who enforce the stigmatization of a drug that is legal in 18 states — and growing.

"I thought we were way more educated about marijuana, but it just shows me that we aren't in this in this specific space," Shumake says of the athletic world. "This shows that myself and my team have more work to do."

Runner's High was founded in 2017, well before U.S. sprint runner and rising star Sha'Carri Richardson was banned from participating in this month's Tokyo Olympics after a drug test revealed she had THC in her system. Cannabis is among an extensive list of drugs, medications, and performance-enhancing supplements banned by the World Anti-Doping Agency.

Days before the Olympic Trials, which took place in June, Richardson, 21, was informed by a reporter that the runner's biological mother had died. Richardson said she used marijuana to help navigate the "emotional panic" following the news.

Shumake calls Richardson the best runner out there, and says he's rattled by the fact that her mental health needs had not been taken into consideration by the committee that continues to enforce rules and regulations that many, including Shumake, believe need to be reassessed.

"I think the issue here is they're trying to compare marijuana to other drugs and trying to say it's, you know, on that same plane, when it's not," he says. "Like I don't see it being pro-performance enhancing. It's not improving their skill set and it's not making them run faster or jump higher or anything like that."

And he's right. Research, though limited, has shown that there is no scientific evidence to suggest that marijuana improves one's athletic ability. Sure, it can aid in recovery from aches and pains related to training and exercise and can, as Shumake says, clear your mind before or after a run. If anything, though, marijuana has been reported to have the opposite effects of your typical performance-enhancing drug.

“If you look at any test of physical performance, there’s either no data, it’s a wash, or marijuana makes it worse,” Dr. Michael J. Joyner, an exercise physiologist and anesthesiologist, told The New York Times. Some studies found cannabis hindered performance when subjects performed endurance and exercise tests, many of whom reported increases in blood pressure. Not to mention that smoking cannabis, as Richardson admitted to doing, "clearly damages the human lung,” according to the American Lung Association.

One 2019 study, cited in The New York Times, found that more than half of the 600 subjects reported that cannabis actually motivated them to exercise, while 70% said ingesting cannabis helped them simply enjoy the actual exercise more than when they weren't under the influence.

I’m sorry, I can’t be y’all Olympic Champ this year but I promise I’ll be your World Champ next year 🤞🏽⚡️.


The debate about cannabis use and professional sports is not a new one.

In 2009, Michael Phelps, the decorated Olympic swimmer (he's won 28 Olympic medals, 23 of them gold), found himself in hot water after a photo surfaced of the swimmer hitting a bong.

"Michael Phelps smoked weed, kept all his medals and still participated in the Olympics. Don't y'all start this mess with Sha'Carri," a social media post reads, and one that echoes the frustration of those who believe Richardson's punishment was too severe.

However, the Phelps photo was taken in 2008, months after he competed in the Beijing Olympics. Phelps had never tested positive for marijuana during a period referred to as "in-competition." Richardson, however, was "in-competition" when she tested positive for what is considered a prohibited substance, and therein lies the issue: a double standard? Or is it time for the rules to reflect science and fact that most U.S. adults — 68% — support the legalization of marijuana?

"There's some different pieces going on there," Shumake says of the comparisons between Phelps and Richardson.

"He [Phelps] was the, I guess, golden boy of the Olympics.," Shumake says. "When it came out that summer that he was using marijuana, people were disappointed but more willing to not take down the golden boy. But, you know, with Sha'Carri's situation, she has been a new up and coming star, heading into her first Olympics, and something like this happens and they're more willing to take her down and just bash her for dealing with something that most of us would find is pretty hard to deal with."

As Shumake points out, cannabis use in athletic fields is becoming more acceptable, but there's still a long way to go.

In 2020, the NBA announced a temporary policy in which they would no longer test players for marijuana, though cannabis remains on the NBA's prohibited substances list. And, earlier this year, the NFL revealed that it, too, would relax its random drug testing policy by no longer screening for cannabis, as long as it is in the off-season. The NFL also eased disciplinary action for players who test positive (instead of being suspended from games, they are issued fines) and even donated $1 million in grants to aid in cannabis research as it relates to physical therapy, pain relief, and safe alternatives to opioids. The MLB removed cannabis from its banned substance list in 2019 followed by the UFC, which, earlier this year, stated fighters would no longer be disciplined if they test positive for weed.

In the last year, former Detroit Red Wing Darren McCarty has launched his own cannabis brand as has former Detroit Lions' players Calvin Johnson and Rob Sims who launched their joint cannabis venture, Primitiv, in June.

"I think with Sha'Carri it's allowed people to really look at all athletes, all athletics, all forms of activity, and how people have been using cannabis to really just to get through," Shumake says. "It's not just a fly-by medicine. I think over the last few years it's becoming more accepted but on the international scale, I think this is serving as a big stepping stone in educating people on how cannabis can be used, and how it's non-harmful for the athletes."

It was announced Monday that Richardson will run again when she tackles the 100 meters and 200 meters competitions at the Prefontaine Classic next month, just days after Runner's High hosts their inaugural 5k run/walk on Belle Isle. The run, which takes place on Aug. 15 and costs $45 to register, will benefit U-M's continued cannabis research and Runner's High's commitment to educating athletes and non-athletes alike about the physical and mental health benefits cannabis can provide.

Shumake also says the race can also serve as an introduction into "canna-letics" and can serve as an alternative form of protest for those who find themselves enraged or inspired by Richardson's situation and the general injustice surrounding cannabis laws.

The 5k run/walk has garnered some major sponsorships, including the event's leading sponsor Gage Cannabis, which has several recreational marijuana dispensaries throughout Michigan and awarded Runner's High thousands of dollars as part of their social equity grant program last year. But one of the race's partners is treading on new territory.

"One of our sponsors for the run is $hruCoin," Shumake says. "They're a psilocybin cryptocurrency and the reason that we have partnered with them is, in the long run, there's so much more research to be done surrounding that. And I'm not opposed to supporting that [therapeutic use of psychedelics] or researching the benefits and how it can be used to support athletes," he says. "On our end, we're focusing on cannabis at the moment. But it's not too far away. I think it's right out the front door."

To learn more about Runner's High or to register for the upcoming race, visit runhigh5k.com.