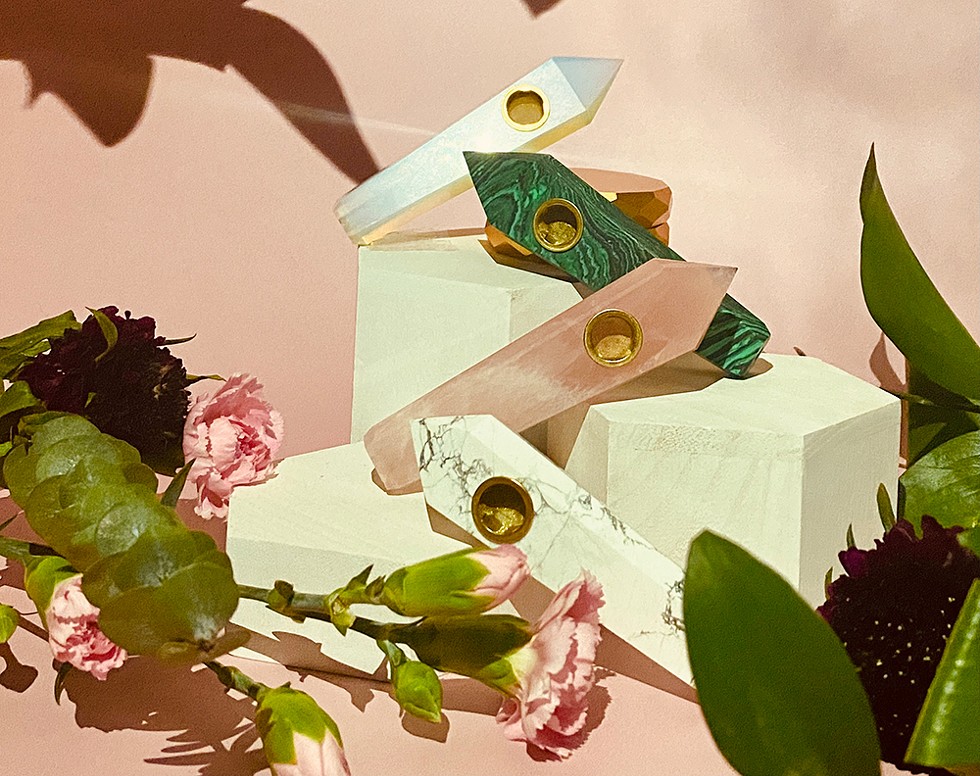 Nanette Dondero and Gena Gaudio became friends while working in Detroit's fashion industry, bonding over their shared love of design, as well as a fondness for cannabis. One time during a backyard smoking sesh, they both lamented how their smoking accessories could use an upgrade.

"We started talking about how our smoking accessories were just not that great looking, and why that was, and why it felt like there was sort of a gap in the industry for accessories designed with aesthetics more in mind," Dondero tells Metro Times. That's when they got the idea to start their own cannabis accessory brand.

Verdeux (pronounced "ver-doo"), a portmanteau of the French words "verdure" which means greenery and "deux" for two, was hatched in late 2019 and launched at the end of 2020. "With COVID and everything, we really kicked it up a notch and we had more time to focus on it," Gaudio says.

The company, whose tagline is "smoke beautifully," features collections of gorgeous accessories, anchored by crystal-shaped pipes with gold-rimmed bowls. Speaking of gold, there's plenty of it: gold-tipped cones, gold ashtrays, gold grinders, and gold "smoking rings," similar to a vintage cigarette holder but with a clasp at the end shaped like a small pair of hands to hold your joint.

"It's kind of piggybacking off of the 1920s idea about stylized cigarette holders, like, smoking can be glamorous," Dondero says.

They also say they looked to classic bar carts for inspiration. "When we came up with it, it was like everyone focuses on their bar carts and social drinking and different glasses for different occasions," Gaudio says. "And we kind of replicated that idea and put it into socially smoking with your friends and cannabis, and having like a curated collection that would live side by side with your bar cart items."

Verdeux's first collection was centered on emerald greens and golds, like the "Muse Pipe," which was made to look like malachite but instead uses reconstituted quartz after they realized that smoking out of malachite wouldn't be safe. Since then, they figured out which actual minerals they could use, and have released a new line of pipes made out of natural materials, including opal, quartz, and white turquoise. A recently launched spring collection features a splash of brighter colors, including rainbow cones, ombre pink pipes, and rose gold accessories.

They say they got the idea to release new seasonal collections from their time working in fashion, as well as their own habits.

"We're already seeing quite a few repeat customers and people that are sort of opening themselves up to this idea of having, you know, like a 'wardrobe' of cannabis supplies," Dondero says. "Gena and I even asked this question when we were first coming up with Verdeux — like, why did we have one pipe when we have like, you know, 20 pairs of shoes for different occasions?"

Dondero admits she had second thoughts about entering the cannabis industry, however.

"I had this moment right before we launched where — I'll be honest, I was a little nervous," she says. "Just because of putting our names to something cannabis and whether that would cause any kind of judgment at work or any sort of issues with acquaintances and things like that." She also wondered if, as a mother, she would be stigmatized for cannabis use.

"I just landed on the point that, you know, this is something that is legal, it's something that's helping people, and if I can be part of making a change in that, then I should be willing to put my name and my face to it."

"I was raised in a very political household, and for me, I got a medical marijuana card early on," she says. "The idea of putting my face out there wasn't a big deal to me because it's something that I just viewed as completely legal. If I'm not doing anything illegal, why should it matter?" She adds, "There is a stigma with smoking still, especially for women in a professional aspect. Before we started this, we didn't really like to share or talk about our cannabis use, because we pride ourselves on being professionals. ... But I was actively using cannabis after work or on weekends, and it hasn't affected my job. If anything, I think it helps me be more productive because it allows me to relax and quiet my mind when I want to."

Dondero says their new venture has been widely well-received.

"I have been really, really happy to see it really had nothing but positive feedback and support from people," she says. "People have been really celebrating the fact that we're doing this, both in my professional life and my personal life."

Since launching the company, they realized they weren't the first ones to come up with the idea. "I will say now that we've been in the industry a little longer here, we have discovered other brands that are doing more aesthetically focused cannabis accessories. I think it's still really something that's emerging, due to a lot of the restrictions with social media and things like that," Dondero says, referring to platforms like Instagram and Facebook banning cannabis-related ads, despite its use for recreational purposes being legal in states like Michigan, due to cannabis still being illegal under federal law. "It's honestly just challenging to promote those brands, which I think is why we didn't know about them as much," she says.

Helping to bring cannabis out of the shadows is another reason why the two started Verdeux, they say.

"I think that part of what we're doing by making these items that in the past have been sort of taboo into something really beautiful, it's almost kind of like a silent protest almost to that stigma," Dondero says. "It's like, taking something that society has said should be hidden away and should be shamed, and we're going to make it as beautiful as possible and celebrate that, because that removes that stigma."

The 420 Issue: Michigan's cannabis scene is blooming
By MT Staff
One Hitters