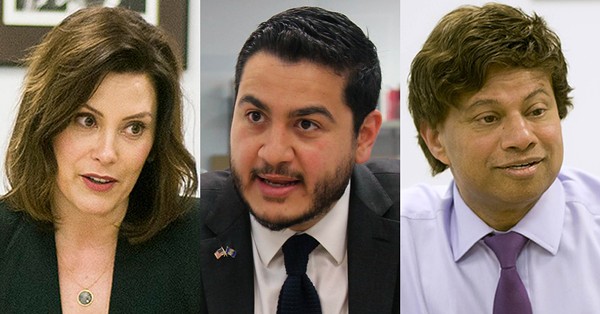 One in five state residents are expected to vote. If you're registered and will be out of town, you must request an absentee ballot by Saturday Aug. 4.

Here, we have provided a guide to where the Democratic candidates stand on key issues. We cannot even pretend to wish to acquaint you with the Republicans, all of whom sought to align themselves with President Donald Trump in a primary race that was largely devoid of policy detail and moved the candidates far to the right.

Whitmer is running for governor after serving 14 years in the state House and Senate. She is more moderate than her progressive Democrat opponents, and has been endorsed by the United Auto Workers, Michigan Education Association, Detroit Mayor Mike Duggan, and establishment newspapers, and has been leading polls by more than 20 points.

Whitmer helped pass the 2013 law that expanded Medicaid to an additional 680,000 low-income residents through the program Healthy Michigan. She's the only candidate who has not come out in support of a single-payer health care system that would allow everyone to be insured, telling Crain's Detroit Buisness that, while she doesn't oppose the idea, "it's not a real option right now." Whitmer is the daughter of a former Blue Cross Blue Shield CEO and has racked nearly $150,000 in campaign contributions from people who work for the insurer and through a fundraiser thrown by executives who control its political action committee.

Though she doesn't see single-payer as feasible, Whitmer acknowledges, "we are reaching a critical point where the cost of health care plans — with skyrocketing premiums and deductibles — is too high for most families, seniors, and hardworking Michiganders." Her solutions include to "stand up to Washington when politicians try to take health coverage away from people," and working "with anyone who wants to expand coverage, and lower costs of health care, starting with prescription drugs."

Road improvements are a top issue for Whitmer. She says she is committed to building $2 billion into the budget annually in order to draw down an additional $1 billion from the federal government to fund improvements to the state's roads, bridges, and water and electrical grid infrastructure. Whitmer says she would try to accomplish this with help from the legislature and through mechanisms like user fees, but would go directly to voters to pass a bond should lawmakers refuse. Pointing to a report by an infrastructure commission, she says each $1.6 billion in investment would create 18,000 jobs.

Whitmer says she would weight Michigan's per-pupil funding allowance to account for factors like the higher cost of special education, at-risk pupils in urban, suburban, and rural communities, as well as English language learners. She would "restore the School Aid Fund to its intended purpose" and return more than $100 million in school aid money currently being spent out of the general fund. On charters, she would not eliminate existing for-profit charter schools, but rather stop their expansion.

Whitmer is proposing raising the minimum wage to $15-per-hour over three years and repealing the state's right-to-work law. Noting that 70 percent of Michigan jobs are projected to require some postsecondary education by 2020, Whitmer says she will provide two years of debt-free community college and two years of free education to people seeking technical certificates. She hasn't presented specific funding plans for those initiatives, but estimates that together they would cost less than $100 million per year. She says she would further spur the state economy by adopting a "buy American, buy Michigan" agenda, and by creating "strong and enforceable" policies for contracting and procurement that ensure tax dollars are steered toward American and Michigan-owned businesses. Additional jobs would be created through Whitmer's plan to invest $3 billion in infrastructure upgrades.

A progressive Democrat whose primary goal is to "fight inequality in all forms," El-Sayed says he wants to get the money out of politics, and he doesn't accept contributions from corporate political action committees. He has the backing of Vermont Sen. Bernie Sanders and leftist New York Congressional candidate Alexandria Ocasio-Cortez, as well as progressive groups like Our Revolution and the Justice Democrats.

El-Sayed proposes developing a state-level single-payer system called MichCare that could cover all Michiganders while reducing the cost of care for most people. El-Sayed says the plan detailed in would result in an estimated $5,000 in annual savings for the average Michigan family earning $48,000 a year, partly through the elimination of things like premiums and copays. Implementing the plan would require businesses to pay a 2 to 2.25 percent tax on gross receipts over $2 million, which he says will apply to 25 percent of Michigan businesses. The plan would also rely on a new, progressive payroll tax under which the average Michigan family would pay only $38 a year.

El-Sayed says he would create a state infrastructure bank to invest in roads, public transit, water, school buildings, and clean energy. The transit infrastructure bank would be funded with approximately $1.4 billion each year, until the state's roads — which this year got a "D+" ranking from the American Society of Civil Engineers — bump their grade up to an "A." El-Sayed would raise $600 million via gas and diesel taxes, tolls, and higher registration fees for larger vehicles. Another $600 million would come from fuel and vehicle registration tax increases that went into effect last year, and an additional $60 million would come from an excise tax on marijuana, should it be legalized. To update aging water infrastructure, El-Sayed would raise $600 million in initial capital for his Clean Water Bank by issuing a bond that would need voter approval. The Clean Energy Bank, meanwhile, would make it easier for homeowners and landowners to purchase green technology. The bank will be capitalized with approximately $100 million per year. El-Sayed projects one annual payment is enough to generate $3.3 billion of private investment in clean energy by 2035. The bank will be funded by a ratepayer fee of about $11 per household.

El-Sayed says he would "de-DeVos" Michigan's education system by banning for-profit charter schools, limiting the number of charter authorizers in the state, and creating a new independent authorizing council for charter schools. He wants to implement universal pre-kindergarten and provide wraparound services at schools, including school-based community health clinics, social workers, and counselors. Such plans would rely on more revenue from the School Aid Fund. El-Sayed also proposes revamping the state's per-pupil funding model for education and would commission a group to propose a new model that takes into account factors like poverty, language learner status, and special education. He wants to make four-year college tuition-free for households earning less than $150,000. The Detroit News reports his ideas for paying for it include taxing income above the Social Security cap and reducing corporate subsidies.

El-Sayed's education plan also calls for the creation of a school facilities infrastructure bank to more equitably fund education across communities. While the state funds school operations, local communities bear the burden of facilities costs, which puts areas with low property taxes at a disadvantage. El-Sayed would ask voters to levy a statewide property tax of 4 to 5 mills to create a $22 billion Shared School Infrastructure Bank. $14 billion would be used to cover existing facilities debt — which he says Michiganders are already partly paying for through debt service payments (he says they'll pay $1.6 billion between 2017 and 2019) — while the remaining approximately $9 billion would be for facilities funding.

El-Sayed wants to raise the minimum wage to $15 per hour. He says jobs are created when you "put people first" and invest in infrastructure, green energy, education, and health care.

Thanedar is a millionaire businessman with a rags-to-riches story. Born into poverty in India, he came with his family to the United States in pursuit of the American dream, and wound up building a fortune off of his chemical testing businesses. Now he is using some of that money to run for governor and has loaned his campaign about $10 million. Some of Thanedar's early support has been eroded by media reports questioning the motivation behind his run and his treatment of animals. Stories have highlighted his past support for Republican candidates (though Thanedar has donated mostly to Democrats), a meeting with consultants in which they say he considered running as a Republican, and the abandoning of 170 animals outside a testing facility that went bankrupt.

Thanedar says he supports Medicare for All, and that if the federal government doesn't implement a single-payer system, he will work to create one at the state level. His plan would be funded by cuts in state spending, allocating money from federal health care programs currently paying subsidies to the state and health care providers, and "a fair contribution" from employers, including corporations. Until the plan can be implemented, he says he will demand "greater transparency from insurance companies" and pursue universal health care coverage for children under 18 by expanding the state's Healthy Kids program.Thanedar says he would also seek greater transparency from drug companies, create new incentives for personal wellness and preventative care, and increase access to mental health services.

Thanedar estimates it will cost about $60 billion to fix Michigan's infrastructure, and he proposes raising revenue to do so through multiple channels. First, he says, he would legalize marijuana, tax its sales, and use the money for roads. He also wants to find new revenue by taxing the wealthy and corporations by scrapping the 4.25-percent income tax rate and introducing a graduated rate, as well as ending corporate tax subsidies. Lastly, he says he would free up revenue by reducing Michigan's prison population. Prisons account for 25 percent of the state's budget, and that money could better be spent on roads and the state's other needs, he says.

Thanedar says he would boost K-12 education spending, ban for-profit charter school operators statewide, establish year-round school options, and implement universal pre-kindergarten. He says he would also invest $500 million of new revenue into career and technical education and job training programs, though he has not said how he would come up with that money.

Thanedar wants to increase the minimum wage to $15 per hour. Thanedar says that, as governor, "I will use my insight to help small businesses become more successful job creators and to also foster a start-up business culture in Michigan." He says he will help raise incomes through his plans to increase the number of Michigan students who earn college degrees and vocational training. He says he will also look toward the future, as jobs increasingly become automated. "I will find creative approaches to economic development and job creation in a world where automation is replacing many of the well-paying jobs of the past," he says.

An interview with gubernatorial candidate Shri Thanedar
By MT Staff
Local News
Stay on top of Detroit news and views. Sign up for our weekly issue newsletter delivered each Wednesday.