Shutterstock Sleeper hit: Pot isn’t just for partying. Many say they can’t sleep without it.

Years ago, Jerry Millen — a TV sportscaster-turned-owner of the dispensary the Greenhouse of Walled Lake — was working as a producer of MMA events, which required frequent flights between Detroit and Tokyo. The jet lag "really kicked my ass," he says.

Millen later read studies that found sleeping pills could cause cancer. "I'm like, great. I took it for years," he says. But when he started getting interested in cannabis, he realized it could help him sleep, depending on the strain and dose he took.

Now, Millen has come up with his own personal cannabis-aided sleep regimen. He says most nights, he winds down by taking a 20-milligram dose of a tincture made by Mary's Medicinals that is equal parts CBD and THC. "One-to-one seems to do a little better for sleep, because CBD takes a little bit of the psychoactive effects from THC away," he says. Then, about an hour later, he gets into bed and takes a few hits from an Indica-heavy pre-roll, "not to get stoned, but just to kind of mellow me out," he says. "It's almost like a glass of wine. And by the time the pre-roll starts to wear off in about 15 minutes, the Mary's Medicinal tincture will start kicking in. At that point, I'll either take another 20 milligrams of the Mary's tincture, or I'll take a 20-milligram edible."

He says the effect of the second dose from the tincture or the edible works like a "controlled release." "It kicks in once I'm asleep, and it keeps me asleep," he says.

Millen says he came up with the routine after years of practice. His tolerance is higher than most — when customers come into his store looking for help, he advises they start with a lower dosage.

"I can't speak on a lot of things, but I can speak on the sleep aspect of it because I use it for sleep every day," he says. He also tells his customers to keep a log book of what they took and how it made them feel, and then to come back with any questions.

"I suggest somebody who's never used cannabis, maybe you take five, maybe 10 milligrams of THC and you write down the time you took it and what you took, and then you go back as soon as you start to feel it, maybe in an hour or so," he says. "How did you feel? Were you tired? Did you lay down?"

He adds, "Education is everything and keeping track of what you do is everything. Never be afraid to ask questions, never run into a dispensary and buy something and just run out."

Millen says he's hopeful for the day when the federal government will legalize cannabis, allowing for scientists to do more rigorous testing of the plant and its possible health benefits. "If the government would just let some of these professors and scientists study it, like they want, we could have a whole new line of medicines that are plant-based for our society to try," he says. "But basically I'm just making my own controlled release by dosing it an hour in between, but it works perfect."

Michigan voters approved cannabis for medical use in 2008, and for recreational use in 2018, with the first adult-use marijuana dispensaries opening in 2019 and 2020. But Millen says plenty of his recreational customers are actually people seeking cannabis for medicinal purposes. He says sleep is one of the most popular reasons his customers, who skew older, seek cannabis.

John McLeod, co-founder of Cloud Cannabis Co., agrees. "What we've discovered is that a large majority of the adult-use consumers really are medicinal consumers, but either do not want to, do not have the ability to, or have reasons not to get their card," he says.

"Sleep is the number one ailment that people come into the store looking to treat, whether they be adult-use or medical, bar none," he adds. "There's not even a close number two, to be honest. There just really isn't."

Millions of people have trouble with sleep these days. A 2018 study found smartphone and tablet use was linked to people sleeping less, with scientists theorizing that the bluish light from electronic devices could be messing up our biological circadian clocks. It also can't help that we live during stressful times. A 2020 study found that sleep disorders affected a "substantial" proportion of the general population during the pandemic, including an impact on mental health.

Like many other dispensaries that have eschewed the old-school strain names to come up with intuitive ways to categorize their products, Cloud Cannabis Co. divides its wares into broad categories based on the desired effect: "energize," "focus," "calm," "relief," and "sleep." The company has introduced a new line of themed "boxes" containing 10 curated items along those categories. It debuted its first box, which was sleep-themed, during Sleep Awareness Week in March. The boxes sell for $100, but McLeod says they contain more than $200 worth of products. He says the company envisions turning into a subscription service.

The sleep box contains products that are marketed for their sleep benefits, including 25-milligram caramels from Dream Edibles, tablets from Rise, indica-dominant pre-rolls, and other items. McLeod says he has used the caramels for help relaxing. 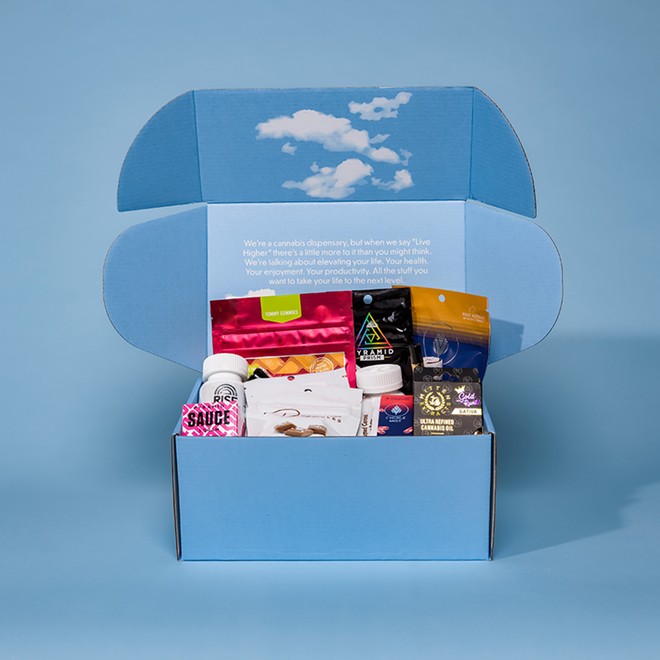 "It's a really good product for the end of the evening," he says. "I know from my own personal use that taking the caramels about a half an hour before bedtime is really a great way to ease yourself into a good solid sleep."

As the industry grows more sophisticated, more products are being marketed for different properties based on which cannabinoids they contain, or the compounds derived from cannabis. THC is well-known for the high most commonly associated with cannabis, while CBD has become more popular in recent years for its calming, non-psychoactive effects. But a lesser-known cannabinoid is CBN, which is made by aging THC. It may have sedative effects when used with THC (a phenomenon known as the "entourage effect"), but scientists say more studies are needed to link it to sleep.

Tim Schuler is president and COO of the Detroit Edible Company, which recently launched a line of CBN-heavy gummies in Michigan. He says the market suggests that the gummies do indeed work for sleep.

"We looked to Colorado, California, Oregon, and Arizona because we have connections to different companies out there," he says. "One of the things that they shared with us is that if you can create an edible that's a five-to-one ratio of THC and CBN, it's almost like the perfect ratio for sleep."

"A lot of people use gummies as a vehicle for relaxation," he says. "This is not a gummy to take for that reason, because you will fall asleep — you'll feel very groggy. So we don't want to compete with other gummies that are out there. This is specifically to help in sleeping, and appetite suppressant, or pain relief."

The gummies contain 10 milligrams of THC and 2 milligrams of CBN. As with all new edibles, Schuler recommends starting small, perhaps by cutting one in half.

"Each individual metabolizes THC and CBN at different rates; it kind of depends on their own metabolism system as well as what they've eaten that night," he says. "Some people may have immediate effects after 30 to 35 minutes and then somebody else just ate a big steak-and-potato meal, it might take them an hour-and-a half for it to kick in." He adds, "Slow is the way to go when using something new."

I can confirm that the gummies do in fact induce a deep, restful sleep within a half hour to an hour of taking one. Definitely make sure you clear your calendar before taking one — but once you do, get ready to catch some serious Z's.

Millen says he has come to look forward to his self-medicated cannabis nightcap to help him doze off.

"I used to drink wine before bed, but the older we get, in the morning after you drink alcohol, you don't feel so good," he says. "With cannabis the next morning, as long as you don't overeat, you feel great. I get up in the morning — I feel phenomenal."

He adds, "Sleep is like my favorite thing to do, as crazy as that sounds. I love my sleep."

The 420 Issue: Michigan's cannabis scene is blooming
By MT Staff
One Hitters