Michigan ignored complaints about Flint’s water, and also about the state of Detroit’s public schools 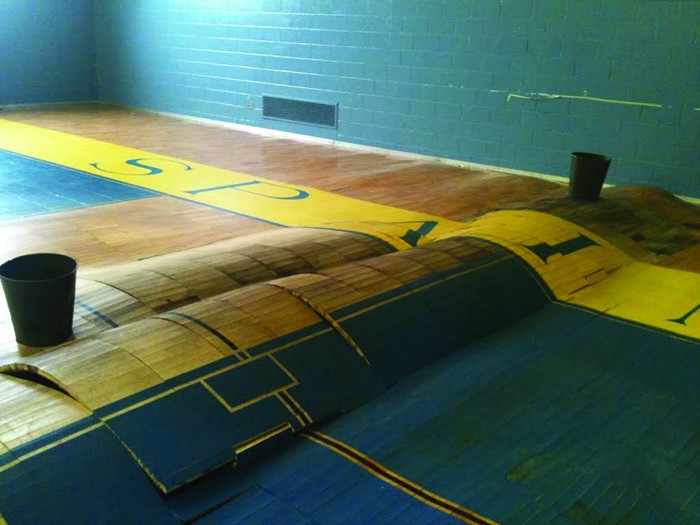 When Detroit Mayor Mike Duggan inspected Spain K-8 a couple of weeks ago he expressed "shock" to find a dead mouse, a warped gym floor, and a student wearing a coat because it was cold in the classroom.

Maybe the smell of fresh paint should have shocked him too. A teacher who works at Spain told me the paint job was done the night before the mayor was to inspect the building. I don't know if DPS emergency manager Darnell Earley — who's been here a little over a year — sent the painters over that night to avoid an embarrassing scene or not, but it was way too little too late.

Teachers and parents have been complaining for years about the conditions at Spain. One teacher I know has been taking pictures. I was shown June 2014 photos of a seriously warped floor. It's the kind of damage that looks like it was done from long-term moisture not a one-time watering.It actually looks like a surface skateboarders might use to do tricks on as they avoid the trash containers spread about to catch water dripping from the roof.


More recent photos, from a few weeks ago, show an asphalt patch in the gym where a wooden floor used to be. Another photo the teacher gave me shows a handwritten sign, on loose-leaf paper, reading "Do Not Enter." The thing is, the doors are not locked — and we all know how good kids are at paying attention to a sign somebody hangs on an unlocked door.

Not that the indifference to the conditions in the school ends there. I was shown pictures of steam spewing out of the ground next to a playground where kindergarteners play, plaster crumbling from walls, ceilings where numerous tiles had fallen off, a steam pipe with the insulation crushed exposing the hot pipe, and a grate to an air duct behind which chunks of concrete have fallen, blocking the flow of the air. Oh yeah, there are photos of mold growing on the walls.

No wonder the teachers staged a sickout. Their complaints were not being heard at any level. I was shown a copy of a letter written on Jan. 5. The teacher wrote to Denise Marshall, industrial hygienist at the Michigan Occupational Safety and Health Administration (MIOSHA) regarding a complaint she had previously made.The teacher wrote:

Thank you for your prompt attention to my MIOSHA complaint regarding safety and health hazards at Spain School. Your letter informed me that your office considers the company's response to be satisfactory and that you do not plan to conduct an onsite inspection at this time.

Unfortunately, the conditions in the school where I work have not substantially improved. The floor in the gym has been removed and left uncovered. Although the doors have been shut, the area has not been sealed off. ...

Employees and children who attend the school have been experiencing health concerns that [are] similar to symptoms from exposure to black mold spores, including but not limited to respiratory ailments, chronic fatigue, stomach pain, difficulty concentrating, and sore throats.

Obviously teachers had been complaining before that, and had taken their complaints to MIOSHA sometime in 2014.

Another letter from MIOSHA to Spain school dated May 28, read:


The letter from MIOSHA went on to detail the complaints, which included no hot water in most faucets, leaks and potential mold throughout the building, multiple rooms closed due to leaks, strong mildew smell in the building, employees experience allergy-type symptoms, and asbestos exposure.

MIOSHA went on to say, "We do not intend to conduct an onsite inspection at this time. However, you are requested to investigate the alleged conditions and make any necessary corrections or modifications within 15 calendar days ..."

Then, in a letter to my teacher friend dated Dec. 3, MIOSHA wrote:

We have received the company's response regarding your complaint. We consider the response to be satisfactory and do not plan to conduct an onsite inspection at this time.

Sounds like the state was as interested in the conditions at Spain, and the rest of Detroit's schools, as it was about the quality of the water in Flint. Despite numerous complaints from the folks on the ground, nobody from the state took it seriously. All you had to do was look at a bottle of brown Flint water to know that something was wrong; and all you have to do is look at the condition of one of these schools to know the same. But as we know from the state's response to a teacher's complaint, there was no "plan to conduct an onsite inspection."


When Duggan finally deigned to do an onsite inspection a couple of weeks ago he was probably shocked to find the place freshly painted.

Yeah, we all know that the mayor does not run DPS. And in 2004, after five years of Gov. John Engler's "reform" board, Detroit voters chose to return to an elected school board by a 2-1 margin. Still, Duggan should be pretty well aware of the condition of DPS buildings. In 1999, Engler appointed Duggan to oversee a $1.5 billion fix-up of the schools' buildings.

My take is that Engler was not one to leave $1.5 billion alone when his friends could be getting contracts. He dissolved the elected school board and set up an appointed body with veto power wielded by his personal appointee. Then Engler appointed Duggan — who even then had attorney Butch Hollowell at his side — to oversee the spending.

The point here is that Duggan should be very familiar with the condition of the school buildings. He may not know the details, giving him the political cover of plausible deniability, but he should have been well-versed in the prospects for these physical plants. During that fabled summer of 1999 more than 75 roofs were reportedly repaired under Duggan's supervision. Somewhere someone should have known about how long they were going to last.


Rather than being surprised he should have expected what he saw. Teachers have been complaining for years.

I'm not trying to lie this at Duggan's feet. Again, as is the case in Flint, a fish rots from the head, and all this comes from the top in Lansing. My sense is that the state will just let the schools fall apart; then there'll be nothing left to save.

My sense is supported by the fact that Earley, the emergency manager who oversaw the debacle of Flint's water, is now the emergency manager of DPS. He let things fall apart in Flint despite evidence that the plan wasn't working. And he seems to be doing the same thing here. Drink your lead in Flint; breathe your mold in Detroit.