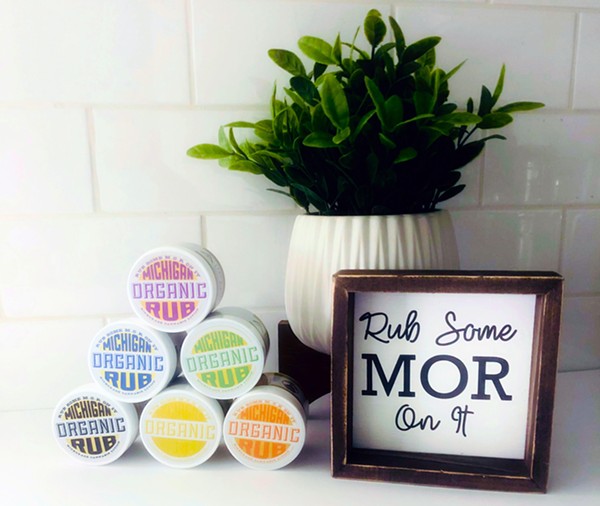 In 2013, his arm was severed when his off-road vehicle flipped in White Cloud. He was bed-ridden for weeks and nauseated from taking 10 different pharmaceutical drugs.

“I realized I needed to do something to save myself or I’d become a vegetable,” Volovlek, whose arm was saved, tells Metro Times. “It was really affecting my life.”

But there was a bright spot: Smoking marijuana made him feel better. So he began researching cannabis’ role in pain relief and soon found that he was on to something life-changing.

Through trial-and-error, Volovlek developed an organic, cannabis-infused lotion that relieved his pain. He shared the homemade concoction with friends, and they reported positive results for a variety of ailments – arthritis, headaches, menstrual cramps, various skin ailments, and nerve, joint and muscle pain.

“At the time, I had no intention of starting a business. I just wanted to get back to my normal life,” he says. “But I realized this could help a lot of people.”

And it did. Eight years after the crash, more than 100,000 jars of his cream, Michigan Organic Rub, has been sold in numerous dispensaries throughout the state. The product line includes lotions and balms with a variety of scents, from lemon and lavender to vanilla mint and orange cream.

Volovlek eventually sold the product line to Pincanna Lab, a Farmington Hills-based cannabis cultivator and distributor, where he now works as a consultant and develops other products for the company.

"I’m very proud of what I have been able to create with some positive thought, hard work and dedication, Volovlek says. “The amount of people who have reached out to me with success stories about something I’ve created, still blows my mind and is something I will never take for granted. I’m incredibly thankful to be in this position and blessed with an ability to help people heal safely."