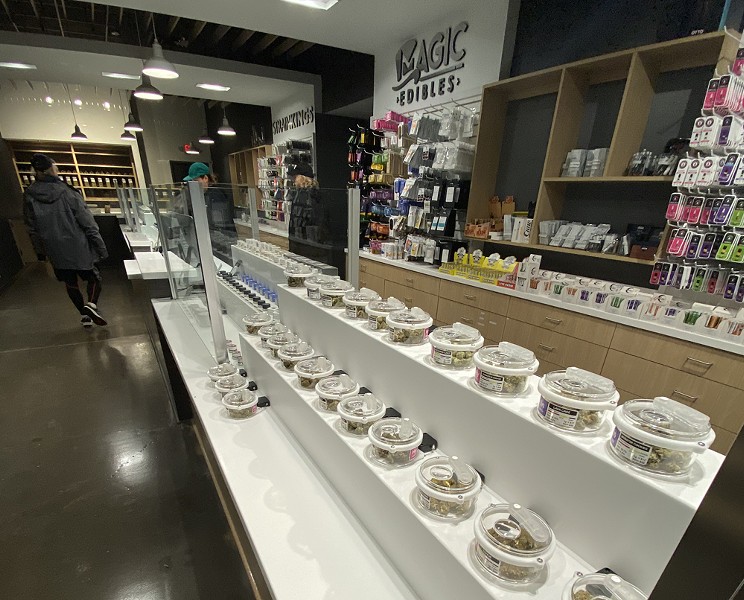 A lot of people are chomping at the bit to buy the stuff, and certainly retail store owners are eager to sell it to them. This is where the pedal hits the metal for the marijuana industry. All the investments and projections are based on millions of folks like you and me walking in the door and spending our money.

We're ready — but not everybody is.

Legal adult-use marijuana is finally a recognition of the cultural reality that adults use marijuana and it's a waste of time and resources to keep chasing them around to keep them from engaging in a relatively benign activity. But actually engaging with marijuana won't be so easy.

First of all, there will probably not be any actual sales starting on Dec. 1 as widely advertised. Sales were originally supposed to start in 2020, but the state surprised with the announcement of the new Dec. 1 date earlier this month, telling dispensaries and growers that they may use up to 50 percent of their medical cannabis inventory on recreational sales. But sales probably won't start Dec. 1 because that's the Sunday ending Thanksgiving weekend. Hence, no state workers are in the office to register the transfer of medical marijuana to adult-use marijuana. That has to happen before any adult-use marijuana can be sold.

"It's a challenge because I can't force my staff — they're civil servants — to come in and work over the Thanksgiving weekend," MRA director Andrew Brisbo told WWJ-AM radio over the weekend. "That was a little bit of bad planning on our part, but we want to provide an opportunity for businesses to move ahead."

So sales probably won't start until at least Dec. 2. Then it becomes a question of where. Less than a week before scheduled sales, there are only three adult-use licenses granted, all of them in Ann Arbor (Exclusive Brands, Greenstone, and Arbors Wellness). More licenses are expected to be given out this week, but how many can realistically get processed in this time frame?

Plus more than 1,400 communities have opted out of adult-use sales, including Detroit, which is expected to be the biggest marijuana market in the state. Detroit's opt-out is temporary until Jan. 31 unless council extends the ordinance. Lansing has opted in, but won't even start taking applications until Dec. 23. A Lansing State Journal report estimates that it will take long into 2020 before any locations there are licensed and open.

Wrap all that up with the recent vaping crisis and the ban on marijuana vaporizer sales announced by the governor last week, and things don't look so rosy. That means you won't be able to buy marijuana vape cartridges, which will put more pressure on flowers, or the good old-fashioned green stuff. It's beginning to look like the beginning of adult-use sales isn't going to start with a bang.

Detroit isn't even taking applications for any kind of marijuana business right now. When your largest market by a long shot isn't on board for opening day, things are not going well. Detroit leaders are taking a slow, we-run-this-show-and-marijuana-sales-start-when-we-say-so walk to adult-use sales. Reports say that the hang-up in the city marijuana ordinance is the effort to make the social equity side of things operational. One might argue that council members have known that adult-use marijuana was coming for a year. But they've only known all the state rules from the MRA for a few months. The MRA social equity program announcement was made in July.

This is what we're looking at. Despite reports that a number of locations in Detroit have prequalified for licenses, MRA spokesman David Harns said last week that there are "no adult-use licenses in Detroit" and there won't be any come Dec. 1. It's a slow rollout. There will be little more marijuana available to the public than there was before that date.

Apparently, our situation is not unusual.

"No other state has met their legislative or stated deadlines in the same situation," says Brighton-based accountant Paul Samways, who has numerous clients in the marijuana business.

As Brisbo admitted, the MRA has a bit of "bad planning" on the opening dates. Hmmm, maybe there's been some bad planning in other areas, too. Let's just say this is not going to be a smooth rollout. There will be fits and starts because hardly anyone has any experience here, and everybody is learning on the job. Add to that the fact that there are people who don't want to see a smooth rollout, who don't want to see the system work, and we'll remain on this rocky road indefinitely.

Let’s just say this is not going to be a smooth rollout. There will be fits and starts because hardly anyone has any experience here, and everybody is learning on the job. tweet this

With Detroit out of the picture until at least the end of January, it's hard to judge the landscape at the moment. It looks like Ferndale could become the big operator if the two provisioning centers open there, Gage Cannabis Co. and LIV, get adult-use licenses — which is kind of ironic since Ferndale tried to be a leader in the cannabis industry a decade ago, before Oakland County Sheriffs raided the locations and took them down.

In the meantime, the people who already use marijuana will continue to get it from the black marketers they've been getting it from all along. Just like no state has managed to meet their deadlines, no state has been able to eliminate the black market as a significant percentage of the market. There's a learning curve for everyone involved here.

Once sales do start, there's going to be a question of quality. Everyone will want to know where to get the best stuff. And plenty of people will be willing to tell you that they have it.

"Everybody who is my client claims they grow the best weed ever," says accountant Paul Samways. "It's a huge learning curve to grow in scale."

This whole best stuff thing is going to go through some changes as we move forward. There is no best stuff out there, particularly in the world of extracts. The amount of THC that comes off an individual plant matters more to the business people brokering prices than it does to the customer buying a product. A gummy with 5 milligrams of THC is pretty much the same no matter the source of the THC.