Michigan restaurants that put us on the foodie map 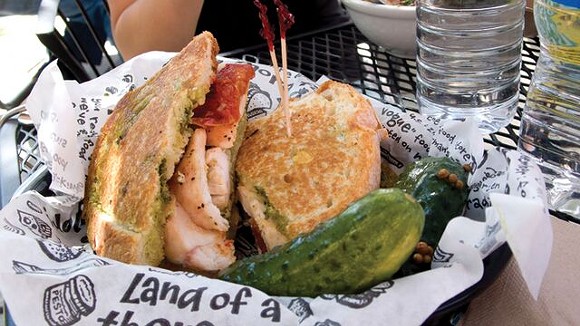 Michigan restaurants have experienced major inroads in getting the state recognition as a vital food destination. It has to do in part with the Mitten’s embrace of farm-to-table sourcing methods and the grit natives have in their blood to experiment with what they’ve got — a trait that dates back to Michigan’s place as a manufacturing hub. We’ve loved it forever, but national media outlets are finally taking notice, introducing several homegrown chefs and restaurants to a wider audience. We say it’s about time. Here are a few such places that, if you haven’t already put on your radar, you should.

The Root has been praised by just about everyone in town — from the Detroit Free Press to The Detroit News to most of the local network TV affiliates — for chef James Rigato’s approach to utilizing locally sourced farmers and brewers to stock his kitchen. Last year his skills were put to the test when he was tapped to compete in Bravo’s Top Chef.

Zingerman’s, known for its made-to-order sandwich menu, premium ingredients like free-range chicken, and farmhouse cheeses, is a Michigan institution and regular stopping point for the likes of celebrity chef Mario Batali and President Barack Obama. This year the Ann Arbor landmark, which is always expanding its services, was nominated for best sandwich spot from The Munchies: People’s Choice Food Awards, an online contest run by the Travel Channel’s Bizarre Foods host Andrew Zimmern.

The slow-smoked ribs here are enough to attract the Food Network’s Diners, Drive-Ins, and Dives’ Guy
Fieri, who profiled the spot, along with fan Kid Rock.

Phil Cooley, the owner of this Corktown barbecue joint, is regularly dubbed as one of the guys who helped revitalize the neighborhood into the dining destination it is today, as evidenced by stories in The New York Times and elsewhere. It also serves as the modern turning point in the Detroit barbecue scene that launched the cuisine to the forefront of the city’s culinary scene.

The generations-old rivalry between American and Lafayette Coney Island in downtown has attracted fans the country over, including Eater, The Today Show, and the Travel Channel’s Man v. Food.

Why go to Germany when you have a taste of Bavaria in your home state? This place in European-themed Frankenmuth became famous for its all-you-can-eat fried chicken and German beers. One of the country’s oldest eateries, it was recently named one of the most iconic restaurants by viral listicle site Thrillist.

Looking for the quintessential pasty shop in the U.P.? The New York Times has called the Yooper dish served here a sure-fire hit.

In case you haven’t noticed, Batali is a big fan of Michigan restaurants. That’s because his wife went to school here and they bought a home in Michigan, where they regularly vacation. A Batali favorite in T.C., according to Bon Appetit, is the Cooks’ House, which focuses on all local, regional dishes, especially walleye, whitefish, roasted rabbit, and Michigan hops.

This punk rock joint made a huge splash in the area when it opened in 2013. Then proprietor Nikita Sanches and fiancée Jessica Imbronone took that momentum and competed in CNBC’s Restaurant Startup, introducing America to RCE’s irresistible pies.

Self-proclaimed carnivore and ubiquitous Food Network celebrity chef Michael Symon stood out when he took a gamble on opening Roast in the Westin Book Cadillac in 2008. But his bet that not only Detroiters, but also visitors from all over the country, would appreciate his meat-focused menu paid off, and it is now one of the crown jewels of the city.

Opened in 1835, this bar is the state’s oldest businesses, and it received much-deserved rep on the national scene when Thrillist celebrated it as one of the oldest watering holes in the country.

We will lump these three pizza chains together and say Michigan is responsible for putting the fast-food pizza genre on the map. Domino’s, headquartered in Ann Arbor, introduced us to the 30-minutes-or-less pizza delivery. Detroit’s Little Caesars gave us the oft-imitated $5 Hot-N-Ready concept. And Jet’s, headquartered in Sterling Heights, gave Americans a rendition of the Detroit square pizza, with its crispy, cheesy corners.

Trattoria Stella’s focus on Italian cuisine and its wine cellar inside a former insane asylum landed it a Wine Spectator’s award of excellence, and Bon Appetit highlighted it as a sophisticated dining destination. Those nods certainly helped reaffirm Traverse City’s place on the foodie map. n