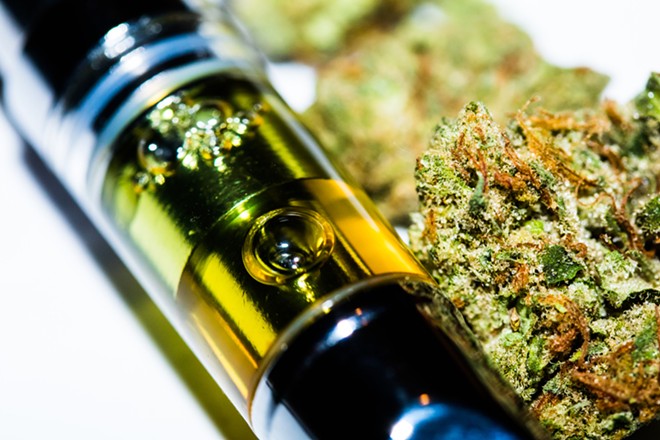 While Gov. Whitmer and the state’s health department insist flavored e-cigarettes and e-liquid constitute a “crisis,” they have done little to nothing to address the THC — or tetrahydrocannabinol, the psychoactive component of marijuana — vape cartridges that have been linked to the outbreak.

Researchers are blaming many of the lung illnesses on knock-off THC vaping products that are sold on the black market. Many of the cases involve vitamin E acetate, a thickening agent, that was found in cannabis cartridges that are used in vape pens.

Even the Michigan Department of Health and Human Services, which warned about flavored nicotine vaping products, acknowledged Thursday that THC appears to be the primary culprit.

“The majority of cases reported that they have vaped THC products,” HHS spokesman Bob Wheaton tells Metro Times. “However, there are some that are not connected to THC.”

So far, the only evidence that nicotine vaping caused some of the lung illnesses is anecdotal.

Asked if the state has done anything to address THC cartridges, Wheaton pointed to a 71-page slide show on the state’s web site. Only one page briefly mentions marijuana, but does not link it to the illnesses.

The Michigan Regulatory Agency, which oversees legalized cannabis, has issued no warnings as of Friday, 10 days after Gov. Gretchen Whitmer announced the ban on flavored e-liquid.

“We’re continuing to monitor the issue and will evaluate the data provided to determine if any action is necessary,” the agency’s spokesman, David Harns, tells Metro Times.

The mysterious lung illness have killed at least six people and sickened 380 others in 36 states, according to the Centers for Disease Control and Prevention.

Vaping advocates say the bans on flavored e-liquids are misdirected and will encourage a dangerous illicit market. Journalist Jia Tolentino, who wrote a lengthy New Yorker story about teen vaping, cautioned that the bans could pose a bigger health risk.

“Basically all these vaping-related hospitalizations are directly linked to black-market or knockoff THC oil,” Tolentino tweeted Wednesday. “The shady stuff & untested devices are what make people sick: banning flavored e-cigs is gonna get ppl back on cigarettes & make the black-market problem way worse.”

Basically all these vaping-related hospitalizations are directly linked to black-market or knockoff THC oil. The shady stuff & untested devices are what make people sick: banning flavored e-cigs is gonna get ppl back on cigarettes & make the black-market problem way worse


Whitmer’s administration defended its ban because flavored e-liquids are enticing to children, who are increasingly vaping nicotine.

“The increasing e-cigarette use among our youth is a public health crisis,” Whitmer spokeswoman Chelsea Lewis tells Metro Times in a statement. “In 2018, more than 3.6 million U.S. kids, including 1 in 5 high school students and 1 in 20 middle school students, were regular users. These rates are still climbing, likely fueled by the availability of flavors akin to apple juice, bubble gum, and Nerds.”

She added, “The bottom line is this ban is intended to protect the health and safety of our youth.”

Michigan’s ban will go into effect when the governor files the emergency orders.

“The rules will take immediate effect once filed. Although the department has not finally determined how long, retailers will have a specified amount of time to comply,” Lewis tells Metro Times.

Vape store owners plan to file suit to stop the ban, saying Whitmer overstepped her authority by failing to get legislative approval.

Under the ban, adults possessing four or more "flavored vapor products or alternative nicotine products" face a penalty of up to six months in jail.