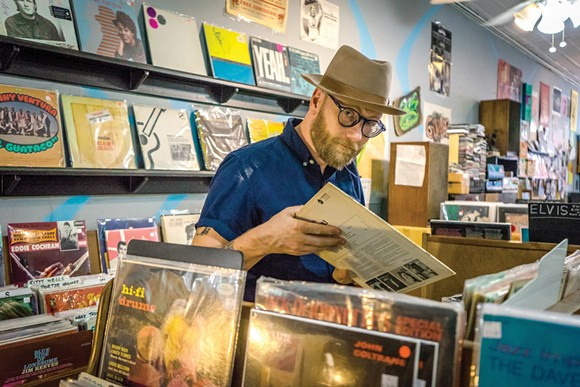 Singer-songwriter Mike Doughty makes music that combines very good words with really good sounds at the same time. He opens his mouth wide when he sings, as if impersonating a 1950s cab driver, or trying to swallow the largest gummy bear on the planet. Doughty has done this for 25 years — first with the band Soul Coughing, and since 2000 as a solo artist.

Currently touring as part of a six-piece band behind his latest album, The Heart Watches While the Brain Burns, the 46 year-old kindly answered these questions before going onstage someplace for a sound check. As you might be able to tell by his answers here, Doughty is relentlessly smart, empathetic, and talented as fuck. Also, there is some pretty exciting news here for Wayne Kramer fans. Do not sleep on his show at El Club on Friday, Feb. 24.

Metro Times: The other day, acoustic guitarist Daniel Bachman, on tour at the time, said that his experience is that everyone seems totally shell-shocked across the land now because of Trump. How do things feel to you? How you holding up?

Mike Doughty: There are fewer people coming to shows on weeknights — I'm hearing this across the board from a bunch of other musicians, and bars I'm playing. People are less willing to go out after work, on a Wednesday, even for a band they love. Weekends are still times to get drunk and yell. That being said, the shows have been pretty great — energetic audiences. I'm also out on the road with people I love, and Trumpian America I think has pushed us to make music that's a little weirder and more artistically strenuous. It's a good place to be in these times.

It's now a kind of sneered-upon cliché to say that awful presidents equal good art, but I think that's what's happening. Both in terms of art focused on resistance, and artists who are just like, "The hell with it, the world sucks, I'm making something I love and that not everyone will get."

MT: How are you liking Memphis of late? I feel like Memphis is a bit like a sister city to Detroit, along with New Orleans. It's been a few years now, right?

Doughty: Two years. Just bought a house. Yeah, I keep hearing that Memphis is the Detroit of the South, which makes sense, and not just for the historic Stax/Motown rivalry. I'm clearly a Memphis partisan, but I can't bring myself to pick between Donald "Duck" Dunn and James Jamerson.

The Memphis vibe is just incredible to me. Magical. How dumb it is to use a problematic word like "authenticity," but, there you have it.

MT: Is it harder or easier to make the music you make in Memphis?

Doughty: Easier. I'm in an all-improv band called Spooky Party; another guy in the band is a Memphis legend (and mystery) named David Cousar. Marcella Simien, who's the daughter of Terrance Simien, the Zydeco guy, sits in a lot on accordion. Most of my band mates play pretty mersh blues and soul gigs or church gigs for a living, and get weird on their own stuff. It sounds kind of like if Can were old people in the 1970s. Hypnotic dancey stuff simmered with dissonance and yelping.

A big part of the deal is just — it's cheap to live in Memphis, I can do stranger work for a smart and engaged local audience, and I don't wake up at 3 a.m. worrying about money. And I live in a house (for the first time as an adult), so drummers can come play at my home.

MT: How did you get thinner living in Memphis? What the fuck.

Doughty: I eat the ribs — full rack, dry — but not the mac and cheese. Also, I guess I just figured out that if what you're eating is some bullshit that it's not worth getting fat for — as opposed to something delicious that's definitely worth getting fat for — just eat fruit, and find the dope ugly food later. Is Wendy's worth the fat? No. Is Central BBQ worth the fat? Yes.

MT: Are you writing another book? I'm guessing it wouldn't be a memoir... Or would it?

Doughty: I am writing another book. It is a memoir — about falling in love as a sober musician getting older, trying to thrive as a musician in janky times.

MT: Have you had good experiences playing Detroit before? Tell me a story, dammit.

Doughty: I've had great experiences, but the only story that leaps to mind is people fucking in a Dodge Ram publicly in the parking lot of the Magic Bag during a snowstorm. I was also good friends with a Detroit poet and songwriter named Blair, who passed away a few years ago, unexpectedly, of an aneurysm. Such a good guy and a powerful artist.

MT: Also how did Wayne Kramer get on the stage with you the other week?

Doughty: Wayne Kramer and I — I guess this is kind of an announcement, being that this is for a Detroit paper — are starting a band. He emailed me out of the blue, I hung out with him in LA, and we're writing songs and making plans. No band name yet. My personal fantasy is to ask either Stephanie Mozgawa from Warpaint or Janet Weiss, on drums, and Booker T., who lives in LA now, to make the record with us.

MT: Is this the most people you have ever had with you on a tour?

MT: Who are all these people?

Doughty: My trio: Andrew "Scrap" Livingston, on cello, but in fact playing bass, and Indiana Pete Wilhoit on drums. Plus three members of Wheatus, the openers. Brendan B. Brown, in particular, was an obsessive Soul Coughing fan, and he flew down to Memphis and super-Otaku absorbed my guitar style, which is incredibly idiosyncratic, in terms of my rhythms and the tuning I use. I could not do this if he wasn't such an obsessive — I don't think the songs can live without that guitar sound at the core.

MT: Are you enjoying being more of a frontman because of this? It looks like you do not have your guitar around your neck for every song.

Doughty: Oh yeah. The thing about this tour is there's a kind of James Brown/John Zorn/Butch Morris thing where I control the improvisatory elements with hand gestures and other signals. So everybody is pushing against the arrangements of the tunes, and I'm selecting and amplifying those parts, as well as getting musicians to enter and exit. It's like operating a mixer — very dance music, functionally.

MT: How long have you been on Patreon? What do you think about it?

Doughty: I think it's been about a year. I was on Drip before that, for a year, which is basically the same thing, but they had a change in ownership that was kind of unsettling, just bureaucratically. Doing a song a week is amazing, and that is really what, if I had my druthers, I'd do for the rest of my life. Like a turbo version of the '60s single vibe. As I get older, I'm more of a song person than an album person.

There's one thing about Patreon that I'm unhappy with: They make you put the exact amount of money you're getting from subscribers right there on your page. First of all, I don't end up with anywhere near the full sum in my pocket, and it makes me angry that musicians are expected to do this kind of self-flagellating, apologetic, radical-transparency stuff.

It's a ton of work, particularly finding time in the middle of a tour to be a blank space for songwriting. But here's the thing — writing songs is not that hard. We songwriters overvalue our precious creations, when in fact the best songs are often just banged out in a flash. It makes you a better songwriter to write more too.

MT: Do you have weird, obsessive fans? What's the worst fan story you can tell me? The best?

MT: How many times a day do folks ask you if Soul Coughing will get back together and what is it that you scream at them in reply?

Doughty: Actually — that's not impossible. The hilarious thing is that it would be unprofitable, given the extra expense of a cooperative band. So if you ever do see a Soul Coughing reunion, it won't be for the money.

MT: What is your favorite color, and why? Your answer has to be at least five sentences long.

Doughty: My favorite color is indigo. It is pretty. It is weird. It is in a Duke Ellington song. These are sentences.

MT: What are you listening to lately? This can't be an answer that you say just to look cool.

Doughty: I've been listening to Rain Dogs a lot lately. A lot. And Lee Dorsey. I took a Ramsey Lewis Trio record from my late Uncle Junior's house in Tullos, Louisiana. I'm that guy who just bought a record player, and I live a block away from Goner Records. So there goes my Memphis cost of living savings. Also just a ton of Black Sabbath.

MT: You've written about experiences with being an addict and then recovery. What's it like being so open about that stuff as an artist out in the world? Aren't you guys supposed to be anonymous?

Doughty: I guess. But fuck it. I think it's helping people if you're open about recovery, particularly if you have an oddball, creative life, and are actually happy.

MT: What have you not done that you most want to do?

Doughty: I really want to tour in Eastern Europe.