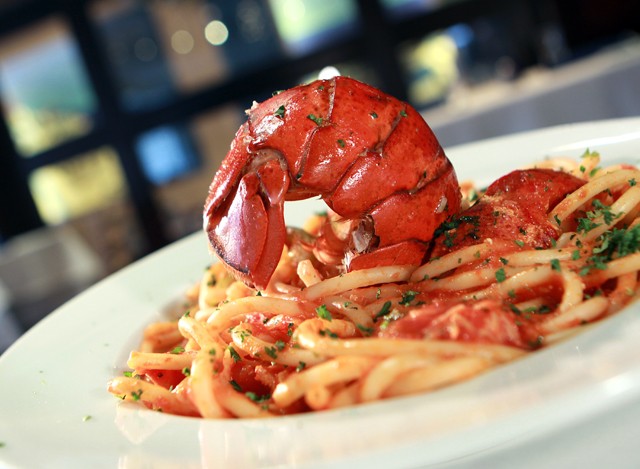 The last place you might think to look for a new Greek restaurant is Greektown, where, in the last several years, many of them have closed, with decidedly non-Greek chain restaurants opening along Monroe. Leave it to the owners of the pan-global fusion joint Mosaic to have the vision to work against the trend, closing their doors for three months of remodeling to reopen as Santorini Estiatorio.

What a difference three months makes! The blown glass droplets above the bar are the only design elements from Mosaic that remain. The new decor has a rustic island feel. The color scheme is the obvious blue and white of any Greek restaurant but what's subtler is the lack of kitsch. Wicker lampshades that resemble fishing baskets hang from the ceiling, and the dining room is separated from the bar by what looks like the hull of a boat. Large paintings of serene ocean views done by local artist Blake Carmichael hang on walls lined with wood that looks like it was distressed by years of ocean mist and sunshine. It makes for a relaxed, comfortable atmosphere.

Our visit to Santorini was an early Sunday evening, just as a crowd of football fans were leaving the stadium. We beat the rush and were able to get a corner booth facing the dining room where we were greeted with complimentary bread made locally by Assimacopoulos Bakery and an olive oil vinegar mix for dipping — simple, traditional, and done right. We started with a couple of cocktails before ordering. A Mythos Muddler: Skinos Mastiha liquor, muddled basil leaves and lemons, topped with soda, a dry but refreshing drink with a strong basil flavor. We also had a couple of Greek Mojitos. (I'm guessing the Metaxa 5 Star is what makes it Greek.)

We went a little appetizer-crazy, ordering three, including a platter with three different kinds of spreads. We went for something a little different and tried the saganaki feta, crispy feta wrapped in phyllo dough, drizzled with honey, topped with sesame seeds. This Saganaki was flame-free, but don't worry — the flambéed version is available, as was evident by the smell of fired cheese and cries of "Opa" that filled the dining room. This saganaki was still quite firm but warm. The phyllo dough created a thin crust around the cheese. The salty flavor of the cheese balanced the sweet flavor of the honey and chocolate, keeping the dish from being too sweet. We also tried the octopodaki skaras, a grilled marinated octopus with balsamic reduction sauce and caramelized onions. I'm not normally the biggest fan of octopus, as it tends to be chewy and rubbery. This octopus was an exception to that rule. It was moist, meaty and tasted of the ocean but wasn't fishy. From the many spreads on the menu we chose scordalia, a garlic potato sauce that was a bit too strong, tirokafetri, a feta sauce with roasted red peppers that cut the burn of the garlic spread, and melitzabosalta, a delicious eggplant spread, the best of the three.

We tried a little of everything on the menu, pasta, seafood, lamb, and beef. The pasta and seafood were served in a single dish, astakomakaronatha, bucatini tossed with tomato cream sauce with butter-poached lobster. We had our server pronounce it for us several times. She admitted to needing a crash course in Greek to be able to pronounce many of the menu items. The lobster portion was generous, a whole lobster tail and several claws, but a bit dry. It was the least favorite dish on the table. We also tried the moussaka, a casserole filled with layered eggplant, potato and simmered beef topped with béchamel sauce. One of my dinner partners exclaimed upon his first bite, "Whoa! I had no idea what that would taste like," a declaration of praise as it turned out. The favorite entrée was the braised lamb shank with a white wine lemon sauce, lemon-roasted potatoes and green beans. The meat fell off the bone, was moist, tender, and had a delicate lamb flavor without being gamey.

For dessert we had ek mek, a shredded phyllo dough layered with a pastry cream and pineapple, topped with house-made whipped cream and slivered almonds. It had a lighter texture and flavor than baklava and wasn't too sweet. We also tried the crème brûlée, which was caramelized tableside, making for a warm, sugary crust. It was topped with whipped cream and berries.

The service was fast and attentive, despite the large crowd and being open just shy of a month. The bus boys were perhaps a little too attentive, hovering near our table asking too frequently throughout the meal if we were ready to have our plates cleared, a small kink that will surely be ironed out in the coming months. Our complaints were few, and we generally enjoyed Santorini's focus on traditional Greek food in a relaxed setting. Hey, with any luck, that's a trend that'll catch on in Greektown?