Hall & Oates, Modest Mouse, Ani DiFranco, and more things to do in metro Detroit this week 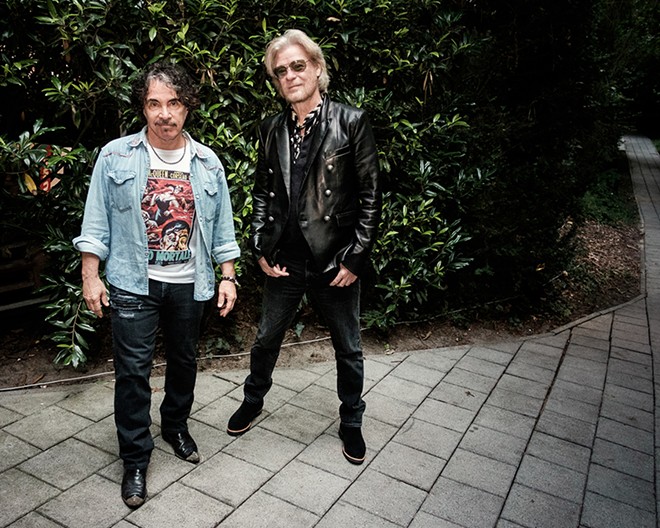 Select events happening in metro Detroit this week. Submit your events to metrotimes.com/calendar

Friday, 8/20: If you're going to resurrect yourself, might as well emerge from a golden casket or, in the case of indie-rock darlings Modest Mouse, their first album in six years, The Golden Casket. The Isaac Brock-led outfit, which may be best known for their 2004 earworm "Float On," has floated on through the last 20 years releasing but a handful of records. The Golden Casket, released earlier this summer, marks a new chapter in the band's evolution, one that maintains Brock's optimistic neurosis. "Somewhere between dust and the stars/Swung open, then slammed shut, yeah, but here we are/We are between, we are between," Brock sings on "We Are Between." Described as occupying a space between "raw punk power and experimental studio science," Modest Mouse's seventh record explores the degradation of psychic landscapes, invisible technology, and fatherhood. —Jerilyn Jordan

Saturday, 8/21: For more than 50 years, famously mustachioed duo Daryl Hall & John Oates have been enchanting the masses with their soft-rock royalty status and their unmatched songwriting sorcery. Though the two no longer record together and live on opposite sides of the country, the blue-eyed soul duo have survived the following: pornographic facial hair trends, rumors that they are lovers, MTV, post-MTV, the '70s, the '80s, '80s nostalgia, '80s nostalgia fatigue, shoulder pads, being low-key adopted by the indie rock and hip-hop community, lavish spending, their underperforming 1972 debut Whole Oats, and a mid-aughts Christmas record, which is the last output the duo released together. And yet, against all odds, Hall and Oates are cool. Like, actually, unironically, very cool. They have their own "Callin' Oates" hotline (719-26-OATES), where a caller can choose to hear a sample from one of the duo's many hits in case of an emergency. (But not a real emergency, of course. That would be stupid.)

So how did two dudes with synthesizers rebound from the fate prescribed to so many from the era defined by excess and Aqua Net? The music. Duh. "Sara Smile," "Private Eyes," "Maneater," "She's Gone," "Kiss On My List," and "You Make My Dreams Come True" are but a minor sampling of the duo's legendary contributions to the tapestry of pop music. If you feel differently, well, you might just be "Out of Touch." —Jerilyn Jordan

Saturday, 8/20-Sunday, 8/21: What's in a name? Or, in the case of Curtis Alan Jones, names. The 53-year-old Chicago native and stalwart in the house and techno genres, better known as Green Velvet (fka Cajmere, Geo Vogt, Half Pint, Curan Stone, and Gino Vittori) has kept the party going for three decades with his brand of emotional and spiritual — yet tongue-in-cheek — approach to throbbing industrial minimalism. He's been topping Billboard dance charts since launching his debut record label Cajual Records in 1992 and has been included on many a Best Of list, including in Rolling Stone's "20 Best Chicago House Records" list in 2014 with his track "Percolator" and in 2019, when Mixmag deemed "Percolator" one of the "20 Best Rave Anthems of the '90s." Detroit will get back-to-back doses of Green Velvet with support from Detroit's own Stacey Pullen on Friday —Jerilyn Jordan

Saturday, 8/20-Saturday, 9/18: If you've found that your emotions are less contained these days and spill over from time to time, you're not alone. Through painting, California native and Texas-based artist Natalie Wadlington explores existentialism, environmentalism, the fragility of human-nature relationships, and the anxiety that manifests as a result. Wadlington's latest exhibition, Pooled, tells the story of a fictional neighborhood outside of California's Bay Area, where humans' obsession with expansion and control have reshaped the natural landscape. But don't expect to see all gloom and doom from Wadlington, as she incorporates a sense of whimsy and childlike wonderment into her colorful paintings. Water is another recurring theme throughout the pieces featured in Pooled as a way to underhandedly communicate the various ways we engage with water and our precarious relationship with the precious resource. —Jerilyn Jordan

Sunday, 8/22: Listen, we're all human, right? And humans have wants, needs, and a desire to ride, grind, and yes, we're talking 100% about the 1996 thirst anthem "Pony" by Ginuwine, which you will be able to hear live thanks to the 105.9 KISS FM Block Party, so long as you don't slip out of your seat and suffer a concussion or something. To celebrate the almost-end of summer (don't worry, we still have time, baby) 105.9 KISS FM is inviting some '90s R&B/hip-hop heavy hitters to keep the summer vibes alive. Ginuwine joins R&B hitmakers Dru Hill, who are known for their no. 1 hits "In My Bed,""Never Make a Promise," and "How Deep Is Your Love," as well as Atlanta favorites Jagged Edge, and 112, a group that snagged a Grammy in 1997 after they were featured alongside Faith Evans on Puff Daddy's tribute to the Notorious B.I.G., "I'll Be Missing You." —Jerilyn Jordan

Tuesday, 8/24: Over the course of nearly 30 years and 20 albums, singer-songwriter, poet, and activist Ani DiFranco has blazed a trail all her own. As one of the first artists to create their own label (Righteous Babe Records in 1990 — she was 19), DiFranco reminds us that folk isn't about wielding an acoustic guitar; it's an attitude. In fact, DiFranco might as well be considered a punk because there's truly nothing more revolutionary than loving yourself, which is exactly what the 50-year-old icon explores on this year's Revolutionary Love. "I will tend my anger/I will tend my grief/I will achieve safety/I will find relief," she sings on the album's bluesy Feist-esque title track. "I'll show myself mercy/I'll show my self-respect/I'll decide when I'm ready/To forgive but not forget/I will ask you questions/I will try to understand/And if you give me your story/I will hold it in my hands." Pass the tissues. Better yet, just love yourself, OK? —Jerilyn Jordan