At 17, Machelle Pearson was sentenced to life in prison without the chance of parole in 1984.

She was convicted of murder. She told police that she accidentally shot a woman during a robbery that her boyfriend forced her to commit. Pearson met her boyfriend after running away from a foster home, where she had been sexually assaulted.

While inside Michigan’s only prison for women, Huron Valley Correctional Facility, Pearson was raped by a guard and became pregnant. She gave birth to her son behind bars.

When he was 5, he was adopted, and she lost contact with him.

Trapped behind bars, there was nothing she could do but grieve.

“Mentally and physically and spiritually, it will break you,” Pearson tells Metro Times. “It’s traumatic. The bond is totally broken. It really hurt me. I didn’t understand. That was my first child. It was like being traumatized all over again.”

Meanwhile, the guard who raped her was convicted of criminal sexual conduct and received two years of probation.

Pearson refused to give up. She earned her GED in prison and pledged to make amends for her mistakes.

In August 2018, six years after the U.S. Supreme Court ruled that indiscriminately sentencing juveniles to life sentences is unconstitutional, Pearson was released from prison.

She’s rebuilding her relationship with her son, who is now 25 years old.

“My son is a phenomenal young man, and I’m blessed that he made it and did not become a statistic,” she says.

Pearson is now an advocate for prison reform and a mentor for at-risk young women. She volunteers for Michigan Liberation, a nonprofit that focuses on reforming the criminal legal system and helping people entangled in it.

About 80% of women who are locked up are mothers, and many of them are the primary caregivers of children. At least 5 million children nationwide have a parent in jail or prison, and Black minors are disproportionately affected, according to federal data. That’s because the incarceration rate for Black women is nearly twice the imprisonment rate for white women.

For the children left behind, the impact can be devastating. Children of incarcerated parents face increased risks of psychological and behavioral problems, trouble at school, economic hardships, poor nutrition, insufficient sleep, and criminal behavior, according to the National Institute of Justice.

To highlight the unique challenges facing incarcerated mothers, two nonprofit organizations, Michigan Liberation and the Advancement Project, launched the #FreeBlackWomxn campaign, a poignant photo and storytelling project featuring seven formerly incarcerated Michigan mothers, including Pearson. Detroit-based photographer Cydni Elledge captures the grief, joy, and resolve of women whose relationship with their children was deeply impacted by prison. Posted on Michigan Liberation’s Instagram page, the photos are juxtaposed with quotes from each woman, along with eye-opening data about the incarceration of mothers.

“It’s an opportunity to amplify the experiences of Black women who are impacted by mass incarceration in an effort to highlight their experience and show the whole picture of who they are,” Ashley Carter, deputy director and senior staff attorney for the civil rights advocacy group Advancement Project, tells Metro Times.

In one photo, Pearson is holding a small portrait of herself at 17. Next to the photo is a quote from her: “The school-to-prison pipeline is real. You have 14, 15-year-olds dropping out of school, going from school to prison. It shouldn’t be like that. They say it takes a village to raise a child. Where is that village now? Where are the people that’s supposed to be the village?”

When Dominica Sims-Sharda was incarcerated for an armed robbery in Kalamazoo in 2005, she was just 17 years old and the mother of a three-month-old boy. She also was a child when her mother was in jail.

Sentenced to 15 years in the Huron Valley Correctional Facility, she wasn’t going to give up on her baby.

“I didn’t have a good relationship with my mom when she was in jail,” Sims-Sharda tells Metro Times. “I didn’t want my child to follow in my footsteps, so I taught him things my mom didn’t teach me.”

Sims-Sharda forged a bond with her son by frequently writing letters and calling him. With the measly pay she received working in prison, she bought her son gifts.

“Those are the things that really held our relationship together,” Sims-Sharda tells Metro Times. “Being a mother is the worst part of being incarcerated. You worry about the safety and security of your child. You try to focus on building a relationship behind bars. It’s so hard, but we have one of the best relationships.”

She also helped other inmates build bonds with their children.

“When I came home, we already had a relationship,” she says. “We have a really good relationship. We’re really close.”

Sims-Sharda is also featured in the photo project. 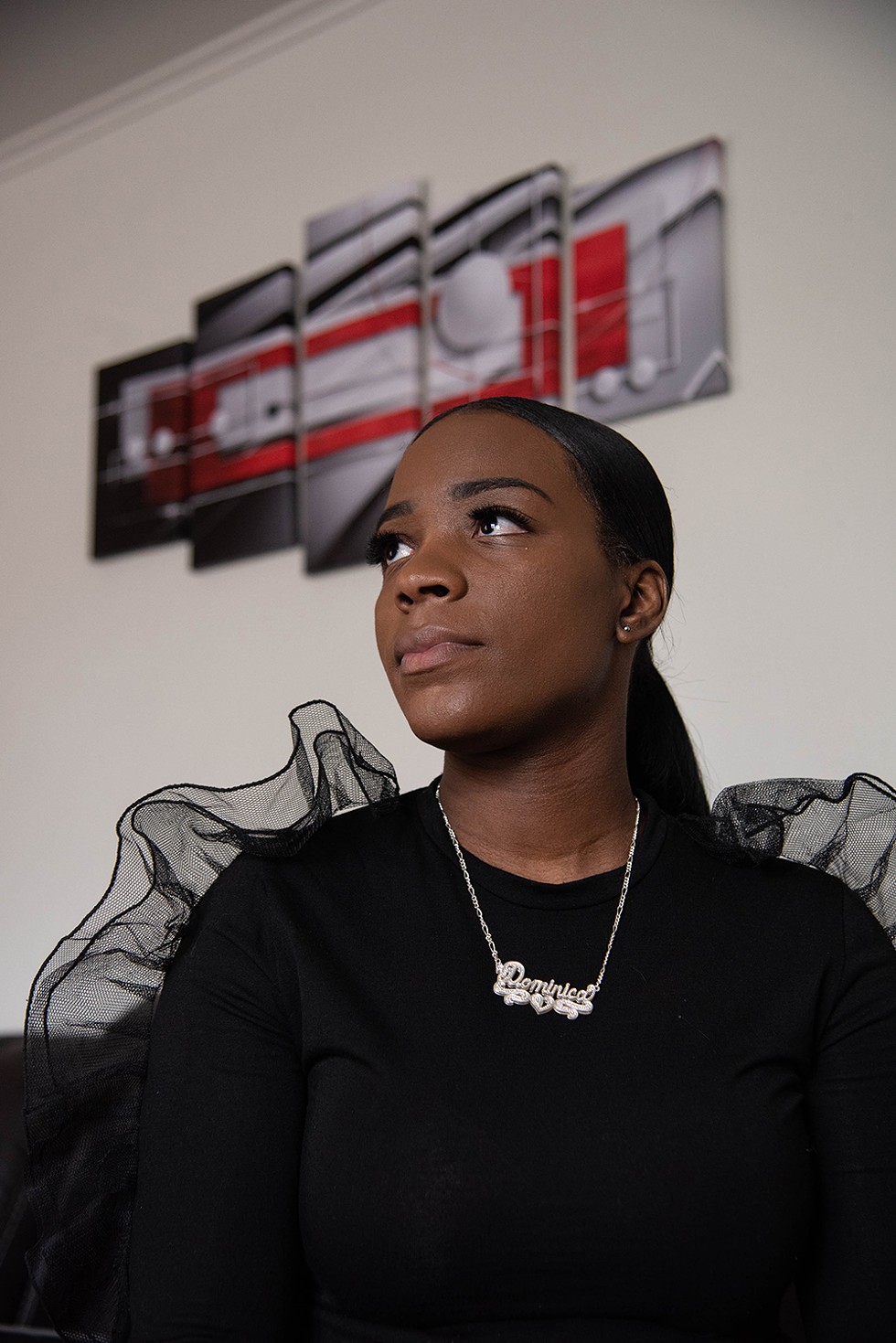 The photos, which coincide with Mother’s Day, are being used to raise awareness about Black Mama’s Bailout, a fundraising campaign to free mothers from jail by paying their bond. Michigan Liberation, which is spearheading the initiative, set a goal to raise $50,000.

About a quarter of women who are behind bars have not been convicted of a crime. They’re incarcerated because they can’t afford bail. Many of them were arrested for minor offenses, such as traffic violations, petty theft, or drug possession.

Mothers who can’t afford bail can languish in jail for weeks, facing the prospect of losing their jobs, home, and children.

In Wayne County, about 38% of inmates whose bonds were set at or below $2,500 remained in jail until their case was resolved because they couldn’t afford to post bond, according to the bipartisan Michigan Joint Task Force on Jail and Pretrial Incarceration, which was established by Gov. Gretchen Whitmer.

“The majority of people in county jails are there because they can’t afford their cash bond,” Earl Burton, relational organizer for Michigan Liberation, tells Metro Times. “It has nothing to do with public safety.”

For lower-income women, a minor traffic crime or traffic offense can translate to weeks or months behind bars because they can’t afford bond.

“This system can hold women hostage,” says Michigan Liberation campaign director Nicholas Buckingham. “If you can’t afford your freedom, you’re stuck in jail. Many people stuck in these conditions will begin to lose things.”

Whitmer’s task force recommended wide-ranging reforms to Michigan’s bail laws last year, including a significant reduction in the use of cash bail, especially for lower-income people. One of the proposals is to release defendants on personal recognizance or unsecured bond if they’ve been charged with a nonviolent crime and don’t pose a public-safety risk.

New Jersey, New York, Alaska, and Illinois have abolished cash bail for the majority of cases. In March, the California Supreme Court ruled that cash bail is unconstitutional if the defendant is unable to pay.

But Michigan lawmakers have yet to act. In the past four years, state lawmakers introduced bail-reform legislation, only to let it stall in committees.

More than half of the people in jail because they can’t meet bond conditions are parents, according to the Bureau of Justice Statistics. Two-thirds of the mothers who can’t afford bail are mothers of minor children.

In 2016, Jessica Preston was eight-months pregnant when she was arrested in Macomb County for driving with a suspended license. She was unable to pay her $10,000 bond, so she was forced to stay in jail while awaiting sentencing. Five days later, she told jail staff she was going into labor, but they refused to call an ambulance, so she was forced to give birth in a “filthy” jail, according to a lawsuit she filed in 2018.

“Macomb County has a very bad track record for women having their children right there on the jail floor,” Buckingham says.

In 2013, Jennifer Meyers, a mother, was 37 when she died in the Macomb County Jail from acute sepsis, an infection that grew into a deadly illness.

At Huron Valley Correctional Facility, between five and 10 women are pregnant at any given time, according to the Michigan Department of Corrections (MDOC).

“I watched one girl give birth, and the child died on her chest,” Pearson says. “It was horrific.”

The prison has a history of neglect and abuse. In 2009, the state paid $100 million to settle lawsuits that claimed male corrections officers had sexually abused and harassed female prisoners.

In September 2019, the prison was closed to visitors because of a scabies outbreak. About 2,000 women were isolated after women began complaining of rashes.

A class-action lawsuit filed in September 2019 alleged a host of problems, including overcrowding, poor ventilation, and leaky roofs that contributed to chronic mold that was making inmates sick.

More than 450 women at Huron Valley Correctional Facility have tested positive for COVID-19, and four have died.

Advocates of criminal-justice reform say there’s no excuse for the mistreatment of mothers in prison.

“I would love it if people could use their imagination to come up with better solutions,” Carter tells Metro Times. “We are beautiful, creative people. We should be thinking of things other than incarceration to deal with our societal ills. We deserve more than we have right now.”