The city can't respond to requests from everyday Detroiters, but jumps when the rich call 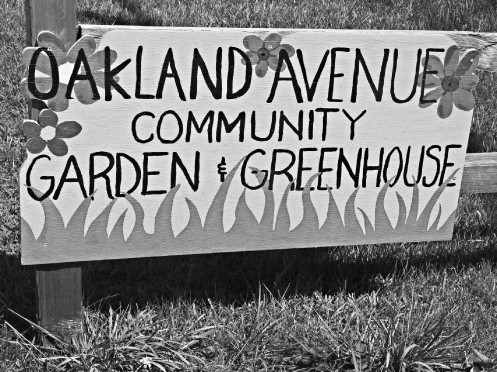 Jerry Ann Hebron had a story to tell last week at the listening session sponsored by the Detroit Food Policy Council at Gleaners Food Bank.

Hebron is the executive director of nonprofit and community relations at St. John Evangelist Temple of Truth on Oakland Avenue, a couple of blocks south of the Bing Industries Complex. She says her job is to make sure the church is connected to the community. I spoke to her again the day after the listening session. This is her story.

About 15 years ago, the city tore down the building next to the church, backfilled the space and leveled it — making a total of 10 vacant lots along Oakland between St. John and Red's Jazz Shoeshine shop, a legendary parlor Motown entertainers were known to frequent back in the day.

Church members became concerned when the lots became overgrown; the area is one block south of Loving Elementary School. "We are a passageway to the neighborhood school, and there are seniors in wheelchairs in the area," Hebron says. "We saw the need to manage the land."

St. John is a small congregation with only 50 members, but they decided to buy the three lots closest to the church. They were already paying for the upkeep. Then, in 1999, they decided to buy the remaining seven lots. They applied to purchase the lots and began a dialogue with the city Planning and Development Department. They were told the city had to assess the value of the lots, which are in a commercial zone. Several months later the city told them the seven lots would cost $11,000.

Although it was expensive, the church put down a $1,120 deposit and submitted a plan for off-street parking to the city. They never got a response — no letter, no phone call, no e-mail. After a few years, Hebron contacted Alvin Mitchell at the planning department. He told her he would get back to her but didn't. Her repeated visits garnered the same response for a couple of years. Then, in 2006, she was told that there was another developer interested in the property. A city official, whom Hebron declined to name, had put a hold on the property. That halted the church's plans, although they saw no development taking place on the properties.

In 2009, Hebron checked to see what was happening and found out the hold had been removed from the properties. St. John was asked to resubmit its application. Hebron submitted a new application with pictures of the work church members had done on the property. Again there was no response from the city — no denial, nothing.

In 2011, Hebron was at the planning department doing business related to a house behind the church that the congregation had purchased. Members are planning a commercial kitchen there for church members to can vegetables from their garden and possibly develop a small business. She happened to be on the elevator with Mitchell and asked him about the seven lots they had applied for. Mitchell checked the status of the application and told Hebron it was old and the church should reapply. St. John was the only interested party, but was required to submit a development plan. Hebron says she resubmitted the application but has not received a response from the city.

St. John's congregation has put a split rail fence along the front of the lots they own, started the Oakland Avenue Community Garden, put in a hoop greenhouse, planted 16 lilac bushes, seven pear trees, and built benches for folks to relax. In 2010, thanks to a $40,000 Kresge grant, they commissioned a sculpture by artist Kef Parker that incorporates a 675-gallon stone cistern that uses a passive water collection system for watering the garden. St. John and Red's are the only establishments on the block. Across the street every building is deserted.

All the city seems to have done for St. John in this case is lose any record of the money that the church deposited.

How could the city's handling of this be considered anything but incompetence of the highest order? Not to mention unfair when a city insider was able to hold up the process. (Was it for personal gain? Likely we'll never know.) Several folks made similar complaints at the meeting, although none seemed to have suffered for the length of time that the good people of St. John have. Their woe has stretched through the Archer, Kilpatrick, Cockrel and Bing administrations.

Robert Anderson, director of the city's Planning and Development Department, seemed to agree with Hebron and others at the gathering that the city has fallen down on the job regarding land sales and management. "The City Charter says we sell land," says Anderson of his department. "I don't think I can walk you through that process."

Anderson and Marcell Todd, director of the city Planning Commission (which is in charge of zoning issues), were apologetic to the 200 or so folks at the meeting, which was co-sponsored by Gleaners Food Bank, the Riverfront East Congregational Initiative and the Detroit Food and Fitness Collaborative. Part of the motivation for the session was the recent sale of about 1,900 city parcels to Hantz Farms for about $600,000 — approximately $300 per lot. Hantz plans to grow high-value hardwood trees on the properties. The Hantz sale is seems a slap in the face for many Detroit residents who for years have been trying unsuccessfully to purchase lots from the city.

Anderson admitted that "money talks" and that a big project like Hantz Farms is going to garner more attention and response from city officials. He pointed out, though, that there is plenty of land to go around. Data Driven Detroit has calculated that there is about 20 square miles of vacant land available in the city. Anderson also said city officials need to "change our obsolete thinking" about what is possible in the city and how things get done.

"Trying to effect change in the city of Detroit can be maddening from the inside," he says.

It's also maddening for folks on the street. Rosie Sharp, from the Shepherd Greens Community Garden, reported that her group can't even get a price from the city for the two lots where they have built a gazebo and planted sugar maples to create a community gathering spot. Bobbi Birnam from the Springwells Village neighborhood talked about her efforts to buy two lots adjacent to her home that she has been caretaking for years only to find out it was sold to someone in Brooklyn. The Brooklynite has never had the grass mowed and reportedly hasn't paid any taxes since 2006.

"I'm willing to pay taxes," says Birnam, adding that if the owner ever shows up, "He's going to have a hard time taking it back."

There are a lot of people willing to pay taxes and do the work to clean up vacant lots and make them neighborhood assets. It would help if there were a fair and equitable process that everybody can understand in order to purchase land. Right now the only thing that seems clear is the city can find a way to make it work for the big players, and it can't seem to find the small folks at all.