When not being clumsily political, an intriguing hybrid of lo-fi and sci-fi review 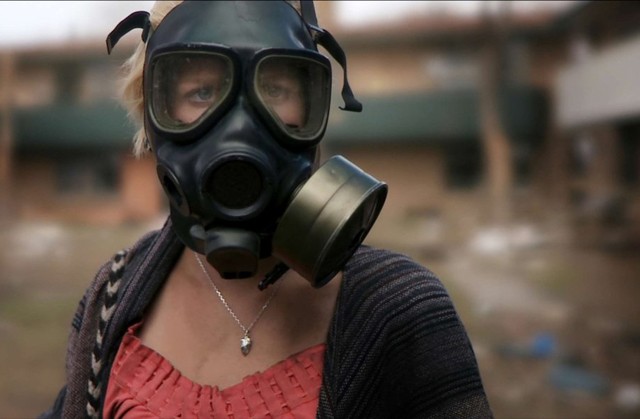 For those who found the apartheid allegory of District 9 simply too subtle, here's a film that posits an America literally walled-off and relying on its military might to keep out a nasty new group of shadowy invaders surging north from Mexico. These "illegals," however, aren't day laborers, but massive, neon-flashing, car-smashing space squids. When not being clumsily political, Monsters is an intriguing experiment in lo-fi sci-fi, a languid indie relationship drama sexed up with the occasional, random giant slime creature attacks.

The lead actor is a guy named Scoot McNairy, a sort of third-rate Skeet Ulrich, who excels at imbuing every line reading with utter clueless wonder. He plays a photojournalist on the hunt for extraterrestrials in Central America, and he's offered a sizable bonus to escort his boss' rebellious daughter (Whitney Able) out of the danger zone. He's ambivalent about the task, even though she's a total knockout, and he'd be wise to get the hell out of Dodge himself, before the U.S Air Force starts flattening the landscape. The road home is a perilous one, involving many negotiations and bribes to shifty locals, and harrowing rides through dense jungle zones (shot on location in Belize) "infected" by the aliens' presence. All the while there is slow-budding romance between the leads, mostly born of a sort of foxhole desperation, and bogged down by inconvenient space octopi assaults and mediocre acting.

First-time director Gareth Edwards is exceptionally skilled at creating mood, but sort of useless when it comes to creating a meaningful narrative. On a microscopic budget, Edwards (working as his own cinematographer) delivers impressive imagery, executing complex digital effects with a grace lacking in many much pricier extravaganzas. You'll be blown away by what he's accomplished for so little money, even while noticing ideas, themes and set pieces mostly lifted from other, slicker creature features, such as War of the Worlds and Cloverfield. Monsters is an uncomfortable indie hybrid, both naturalistic and absurd, but its off-kilter rhythms and haunting atmospherics may just intrigue you — if you don't mind dodging swinging tentacles and huge plot holes.