Mooby’s, chef Josie Clemens of Hell’s Kitchen, and more things to do in Detroit this week 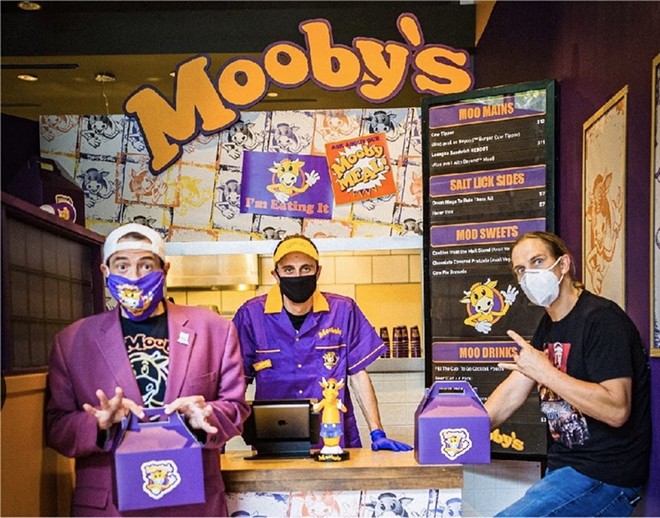 Select events happening in metro Detroit this week. (Submit your events to metrotimes.com/calendar.)

Are you a motherfucker, ball-licker, or lover of low-budget, offbeat cult comedies with a thirst for fictional fast-food restaurants that may have been introduced in a movie in which singer Alanis Morissette plays God? If you answered yes to any or all of these questions, then head down to Mooby's, where the slogan "I'm eating it" pretty much encapsulates the Kevin Smith cinematic universe (the KSCU, if you will.) The filmmaker behind Clerks, Dogma, Jay and Silent Bob, and that movie where Justin Long becomes a walrus (spoiler alert?) is taking his fake fast foodery from the screen to various cities for an IRL Mooby's experience, complete with Hater Totz, yo. Mooby's, which has made appearances in several of Smith's films, will pop up at Detroit's Tin Roof for a two-week engagement where fans can get their grubby hands on the Cow Tipper burger, Cocksmoker chicken sandwich, a Lasagna Sandwich Reboot, Cow Pie Brownies, and cans of Mooby's Lager, which is actually a collaboration with Detroit's Atwater Brewery. Not into meat? No problem. Smith, who survived a massive heart attack a few years back and, as a result, transitioned to a plant-based diet, has made sure the Mooby's menu is 50% vegan, with many of the meaty menu items available with plant-based substitutions. How's that for service, motherfucker? Sorry, not sorry. —Jerilyn Jordan

Listen, we all make mistakes, especially when it comes to social media. Sure, we might not have posted a photo of a Prince lookalike instead of the real deal on the anniversary of his death, but on the other hand, we're not legendary drummer, performer, and Prince collaborator Sheila E, who, clearly, gets a pass for her Instagram blunder earlier this year. Sheila E (nee Escovedo) has been performing since the age of 5, when she was banging out beats on pots and pans before graduating to, oh, you know, icon status, thanks to her work with Prince and collaborations with Herbie Hancock, Marvin Gaye, Lionel Richie, Mariah Carey, and Stevie Wonder. She's also carved out an eclectic solo career, including a recent turn as a Master Class instructor. Though her tour was disrupted by the pandemic in 2020, she was able to serve as musical director of the Grammy's Prince tribute last year, which featured Foo Fighters, Mavis Staples, HER, and John Legend. The 63-year-old percussionist will kick off the annual Wednesday Jazzy Night series with local singer-songwriter Monica Blaire. —Jerilyn Jordan

Is it hot in here, or is it just Hell's Kitchen? Meat your maker — er, meet your meatless maker as Chef Josie Clemens takes over Frame in Hazel Park for a vegan feast fit for, well, vegans. The Michigan-born chef recently competed during season 20 of Hell's Kitchen: Young Guns helmed by the king of mean cuisine Gordon Ramsay, who once famously smashed a contestant's face in between two pieces of bread and called her an idiot sandwich. Iconic. Anyway, Clemens made history as the show's first-ever vegan chef and is one of 18 aspiring chefs vying for the prize, but nowz that filming has ended (her season was actually filmed in 2019 pre-pandemic) the 24-year-old Macomb County native is bringing some of her vegan prowess to a metro Detroit hotspot known for hosting thematic pop-ups. The plant-based ticketed takeover will include a bountiful vegan meal with optional wine pairings for an additional cost. —Jerilyn Jordan

Ava East, Kate Derringer, and Kerrigan Pearce are not letting the woes of 2020 — a year that was absolutely primed to be their year — keep them from living their grooviest, most shagadelic, and totally mysterious lives. After being named one of Metro Times' Bands to Watch, the trio better known as Shadow Show was preparing to embark on a tour (and a SXSW festival performance) in support of their debut record, Silhouettes, when, well, the world went to shit. Oh, and their U.S. label, Burger Records, shuttered following sexual-misconduct allegations against the label's staff and artists. Instead of throwing in the towel, Shadow Show laced up their skates, dusted off their flared jeans, and wrote and recorded their second record. In true Shadow Show fashion, the trio collaborated with Old Soul Vintage to launch the band's Charades capsule collection and — yes, there's more — were adopted as muses for the L.A.-based vintage and upcycled clothing brand Miracle Eye. Shadow Show returns to the Outer Limits Lounge stage with Corey Weedon, Air People, and Hell Dollars. —Jerilyn Jordan