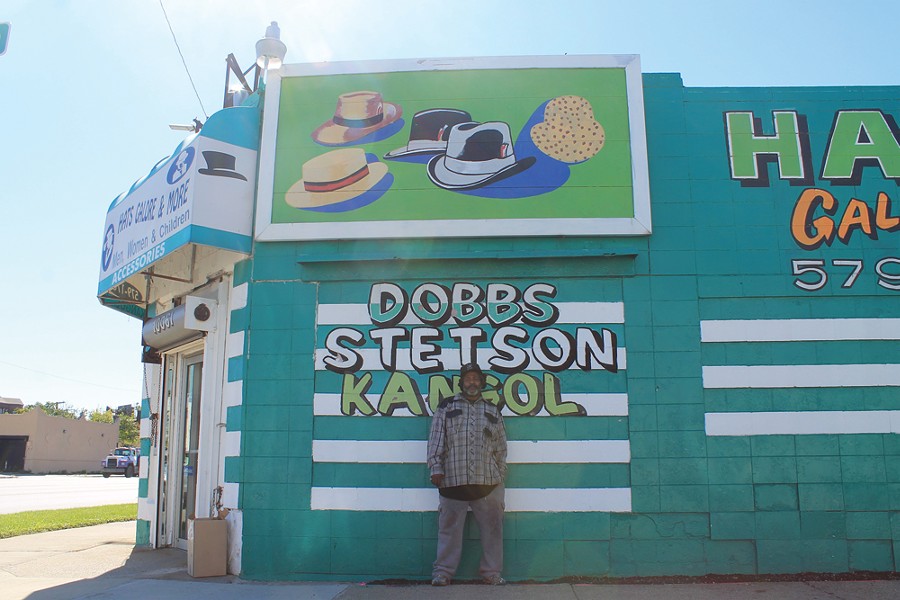 If you've spent any time at all driving around the city — beyond and around the bubbles of downtown and Midtown — you have undoubtedly seen the handiwork of a local painter who goes by the name "Bird."

Bird, who turned 58 this year, was born and raised in Detroit. His real name is Lee Walker, but he's been called Bird since he was a child.

"I used to be skinny," he says with a laugh. "Skinny like the twigs of a bird's nest."

He's been painting, actually, for as long as he's been called Bird. Born into a family of professional sign painters, Bird's grandfather taught him the craft when Bird was young. With seven sons and a whole mess of grandkids, everyone was involved in the business. His grandfather started them off young, teaching them how to paint walls in simple solid colors first. The family tradition continues with Bird's two teenage children, who are both painters.

It wasn't until the seventh grade that Bird realized he had a knack for art.

"I'll put it like this: People started to notice," he says. He started winning contests. But in high school, he committed a crime that sent him to prison for five years. Prison, Bird tells us now, is where he began to excel as a painter.

"I mastered everything in there," he says. When he got out of prison, sign painting really took off for him — and the city became his canvas.

Bird was profiled in Metro Times years ago by John Carlisle, aka Detroitblogger John, who explored the painter's life within some of the city's most overlooked neighborhoods. Back then, Bird operated out of a discount mattress shop on Van Dyke run by family and friends.

The shop, called the Mattress Station, served as Bird's studio and gallery. His work would appear in between used mattresses. The faces of Tweety, Dora, and other cartoon characters mingled with Tupac, Moses, wild animals, and whatever else happened to be on Bird's mind at the time. Bird even figured out how to cheaply make his own canvases using bed sheets wrapped around old bed frames.

Today, the Mattress Station is gone. It burned down about five years ago and with it, Bird lost a great deal of his work — all the art as well as the building itself. He now lives with his brother on a neglected street in one of Detroit's forgotten outer-ring eastside neighborhoods, the kind of street with only five houses standing, only three of which are habitable. Seventy-nine of his canvases are kept in storage at his sister's home.

Bird has also had three strokes since then, most recently about a year ago. It took him six months to come back to life. None of this has stopped him from continuing to paint, although it's a little harder to get around since he doesn't drive much these days. His most recent canvas subjects include Prince and Michael Jackson, while his latest building work took place only a few months ago, a black and white painting of Muhammad Ali inside Uncle Rob's Auto Repair on Seven Mile.

Bird piqued this writer's interest about a year ago. On Gratiot, just north of the Better Made Snack Foods factory, a wild painted scene peeked out from inside a little car wash. Parts were obscured, not all the characters could be made out from the road, but Woody from Toy Story and Bart Simpson were plain to see. They were shaking hands.

The men working in the car wash knew Bird by name.

"He just sees things in his head and then paints them," an employee says. Later, Bird told would say his biggest influence is Salvador Dalí. It makes sense: How surreal is a painting of a giant Kangol hat on the side of a building?

When we finally meet Bird, we take a mini-tour of some of his best eastside work, winding around Van Dyke, Seven Mile, McNichols, Hoover, Gratiot, Outer Drive, and Chalmers, among a handful of side streets, traversing a painted path up and down these slighted areas; every other building appears to be deserted, but sparks of Bird's art offer glimpses of the potential for livelihood in between the abandonment and blight.

Everywhere we stop, Bird is known — and popular. At Uncle Rob's Auto Repair, they tell him to smile for the photos. "I never smile," he says, but then laughs while introducing us to Uncle Rob, a wiry little man.

"Bird's one of the best," Uncle Rob says. "I got so much of his art here. He's been doing it for 23 years now. I don't let anybody else touch the building. I got too much pride in it. I'm an art lover, and I love his art!"

Bird's paintings are not strictly for businesses or other types of functioning establishments, though — they also bring life to vacated buildings in the city's most battered neighborhoods. A building with no future is the perfect canvas for Bird. He hopes for his art to help lift people past negativity by confronting decay with color and creativity.

One of Bird's greatest pieces of this kind is splashed on an otherwise nondescript, decrepit brown building on Gratiot. In this especially eye-catching painting, Mickey and Minnie gaze out at us from inside their pink Cadillac, a tropical scene in pinks and purples enlivening the space around them. He put this one up about 12 years ago, and he's touched it up only once since then — but during our tour he discovered that it will need another touch-up soon, as someone had slapped a bit of paint, a seemingly haphazard brown rectangle, right onto the center of the pink Cadillac.

"Why? Now that's just stupid," Bird says, shaking his head. "I can't believe they did that. I'm gonna come back here to touch it up and I'm gonna take all these walls!"