Perhaps Ben Hall will have the last laugh after all.

The Russell Street Deli restaurateur closed down his longrunning Eastern Market shop last month following a bitter public dispute with his new landlord, Sanford Nelson, a young developer who has acquired more than 20 buildings in the district in the past two years. On his shop's last days of business, Hall erected two neon signs in its windows: "WHERE HAVE ALL THE GOOD TIMES GONE?" and "30 YEARS AND 20 JOBS DOWN THE DRAIN."

That Hall would make such a splashy statement is perhaps unsurprising. What many RSD patrons might not know is that Hall is also a visual artist who works primarily as a sculptor. And at this year's Murals in the Market street art festival, Hall is leaving another mark on the district, with plans to install a 70-foot sculpture outside of the roundhouse, or the public bathrooms across the street from Bert's Warehouse. The sculpture joins two others — by artists Bob Sestok and Carlos Nielbock — that have been installed during previous installments of the Murals in the Market festival, representing a leap from the festival's focus on 2-D murals to include 3-D installations.

The sculptures are not the first time Murals in the Market, which kicked off last week, has moved beyond wall art; the festival has previously collaborated with InsideOut Literary Arts program to bring live poetry readings in front of the murals. "It's called Murals in the Market, but it's really 'art in the market,'" festival founder Jesse Corey says. "It's like, how do we embrace all forms of art?"

"Murals, you know, they can be fleeting," he adds. "They could be here one year and gone the next. These sculptures have a little bit more permanence to them."

Corey, who also heads the contemporary art print house 1xRun, says the Hall installation was more about celebrating the character of Eastern Market. "We thought it was important to find permanent representation of people that had been in the market for years," he says. "When we started curating [the festival], we weren't really sure if these people would be here any longer. So it was our way of taking some people that have spent a lot of time in the market and giving them some more permanency and in there the other part of their creativity." He points out that one of this year's muralists is Efe Bes, who is perhaps better known to Eastern Market shoppers as a traditional African street drummer. 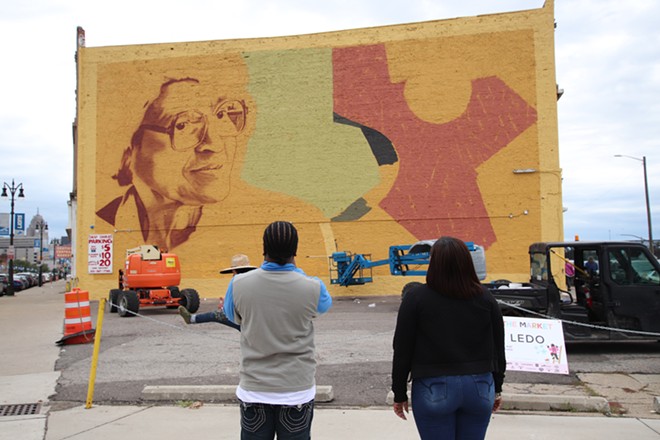 As far as permanence goes, however, Murals in the Market is anything but. Now in its fifth year, the fest — which invites big names in local, national, and international street art to leave their mark on Detroit's historic shopping district with colorful, eye-popping paintings — was named by Smithsonian magazine as one of the top 5 mural festivals in the world in 2018. But Corey says the future of the festival is uncertain, citing the district's aforementioned business development, as well as the fact that a three-year grant from the Knight Foundation dries up this year.

"One of the reasons is that it's really tough to finance this project," Corey says. Finding foundation support for a neighborhood with more than $100 million of development in the works is not easy; Corey thinks those foundations would prefer to offer support to other neighborhoods in need.

Then again, it's a surprise to Corey that the festival has gone on this long. "The first year, we didn't know if we'd do it a second year," he says. "We said we would do it biannually, and then we were like, 'How could we not do it next year?'"

Corey says he is open-minded about ways to continue the festival in 2020. In the meantime, Murals in the Market has a few more events before this year's iteration wraps up. Festival-goers can watch MIM artists do their thing from 11 a.m. to 8 p.m. daily until Friday; you can pick up a map at the Murals in the Market HQ at 1550 Winder St., Detroit.

From 6 p.m.-midnight on Thursday is the annual Eastern Market After Dark block party, which will be a great time to check out the in-progress murals.

From 2 p.m.- 3 p.m. on Friday, there's an artist talk with MIM artists Dennis McNett and Ryan Doyle at MIM HQ.

It all wraps up with a print exhibition and closing party from noon-6 p.m. on Saturday at MIM HQ with installations by Wolfbat and Denial.