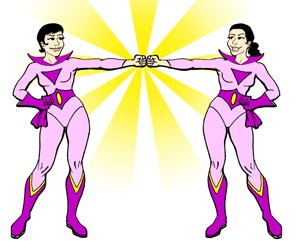 Ignite Detroit — no, it's not some new, politically correct, non-denominational term for Devil's Night. It's a fast-paced evening of 15 mini-presentations by a variety of people on an array of topics with musical guests. The Wonder Twins hit the Motor City Casino Sound Board the other night to catch the spark.

D'Anne: Ignite Detroit is a little hard to explain — but it's basically a cross between a high school forensics competition and speed-dating. This is the second time they've done one in Detroit — the whole Ignite thing is a worldwide phenomenon at this point.

Laura: Right. And the presentations were broken up into groups of five with musical guests in between.

D'Anne: It was at the Motor City Casino Sound Board. Which is exactly where I wanted to be earlier this month when Scott Stapp of Creed was performing.

Laura: Yes. If only it had been a double bill with him and Matchbox 20's Rob Thomas. Then I would have had not one, but two reasons to kill myself instead of going.

Laura: No. It's just awful. Just call it awful.

Laura: Yes. The presentations varied in style, quality and subject matter, but I have to give props to everybody who got up on that stage. Public speaking is a huge fear for most people.

D'Anne: More people are afraid of public speaking than dying.

Laura: Exactly. So I guess that means a lot of people would rather it be their funeral than have to speak at somebody else's.

D'Anne: A lot of the presentations were music related — very fitting for Motown.

Laura: Yes. One of the earliest examples being David "Dixon" Hammond — he never uttered a single word yet had the crowd in the palm of his hand.

D'Anne: He let his electric violin and effects pedals do the talking for him. As he played he recorded and looped bits of music until it sounded like he was playing with a huge group. All the while his slide show presentation urged the audience to reject the notion of impossible.

Laura: Yes. His slide presentation was a much more inspiring version of those Goal Posters that are framed in every office with a photo of an eagle or something above the words, "Determination: Dare to Soar," or some such shit.

D'Anne: I just love motivational artwork. I just put up a framed poster with a photo of pool balls racked up that says, "It's Gay: Balls are Touching" in my office. I get a lot of inspiration from that.

Laura: Something tells me you're about to become very familiar with your company's HR department.

D'Anne: Bring it on. Anyway, speaking of inspiration, after Mr. Hammond was done, the Ignite Detroit host came on stage and told him that the people at Motor City Casino had asked him on the spot to open for comedian Jay Mohr on June 9th.

Laura: That was pretty awesome. Even if Jay Mohr should be opening for him.

D'Anne: True. After the first set of speakers, the first musical guest was local hip hop duo Passalacqua. They rode bikes onto the stage while wearing white dress shirts, ties and newsboy caps. Like rap missionaries.

Laura: Spreading the gospel of Tom Waits and Bootsy Collins. In fact they donned large cardboard masks of said musical legends during one of their songs.

D'Anne: They were all over that stage —jumping on chairs, getting on their bikes ... if actual missionaries had nearly that much energy we'd all be Mormons by now.

Laura: The duo is made up of Brent "Blaksmith" Smith from the hip-hop group Cold Men Young, and MC Mister. All easier to say and understand than Passalacqua.

D'Anne: Then it was back to the presentations. Hubert Sawyers III attempted to share some life lessons we could all take to heart from Vanilla Ice's failures.

Laura: I don't think five minutes is necessary for that. It can be distilled down to: "If you go from riding a yellow crotch rocket, having sex with Madonna, and eating pizza with the Teenage Mutant Ninja Turtles to being the laughing stock of the music world, you're doing it wrong."

D'Anne: We thought Vanilla Ice was so cool back in the day. With his knife fight scars on his eyebrows.

Laura: The next musical guest was Pato Margetic, who I think just goes by Pato? Which is how you say "duck" in Spanish.

D'Anne: Well, yes. But your videos are all you playing shitty Justin Bieber covers on your ukulele. In a Richard Nixon mask. Pato's got some YouTube traction for the video for his song, "Detroit."

Laura: Yeah, a hamfisted-yet-sweet love song to the people and the city. At Ignite Detroit, he played a song about hanging out with his homies in downtown Birmingham behind Olga's.

D'Anne: That is some straight-up street cred right there.

Laura: Round three of the presentations featured one of my favorites. Laura Farms' "You Like Trivial Things, And That's OK!"

D'Anne: Agreed. I believe her main point was, "It's OK if you bought the Glitter soundtrack on the day of the 9/11 attacks."

Laura: She was a Mariah Carey apologist. But then again, so am I. "Love Takes Time?" Classic jam.

D'Anne: One of her slides said "When every problem is huge, nothing is worth solving." So true. As crazy huge as some of the world's problems are, if we didn't turn to reality TV for some respite, even more of us would be joining cults and black helicopter clubs.

Laura: Indeed. In fact, I like to think that our column plays a part in that. Like, there's one person out there who was able to skip their Xanax for the day because of our irreverent words.

D'Anne: And that person would be you.

D'Anne: Ro Spit was the last musical act of the evening. By then people were good and drunk and ready for some rowdy rap.

Laura: He's not only a good rapper, but he's the guy who started the sneaker store Burn Rubber in Royal Oak.

D'Anne: Which is totally the place to go if you want your feet to have some personality.

Laura: During Ro Spit's last song, he repeatedly informed the audience of what sounds like a rather personal problem.

D'Anne: Yes. That haters keep swinging on his dick.

Laura: This admission raises a lot more questions than answers.

Laura: Exactly. I'm a little worried about him. I was too concerned to participate in the "dick swinging dance" that he was trying to teach the audience.

D'Anne: Not me. I'm kind of awesome at it now. I've been practicing. Pretty soon I'm gonna be big on YouTube. Look out, Pato.