Neither forgive nor forget the voter suppressors, no matter how furiously they try to scrub away the Trump stink 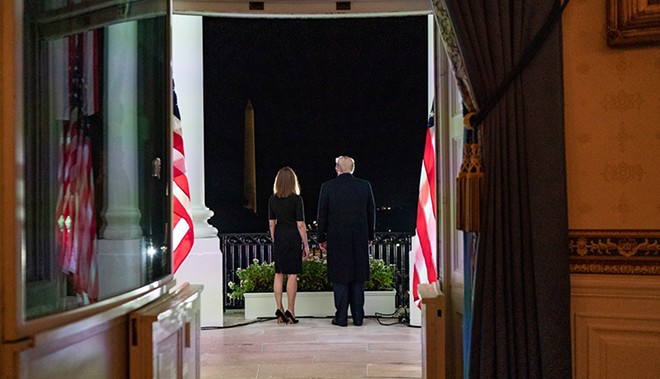 If I had to guess, this shitshow of an election will probably conclude in a rather predictable fashion. After all, if you ignore the day-to-day palpitations and take a long view, the contest looks remarkably steady.

Donald Trump started behind. He remained behind all year. Nothing changed. Headed into the campaign’s final weekend, he was down nine. So if on Tuesday night — or given the deluge of absentee ballots, Wednesday or Thursday or Friday — the networks declare Joe Biden the winner with a 52–46 margin and a little over 320 electoral votes, we’ll nod and go, “That makes sense.”

Of course, as the hymn taught us: once bitten, twice shy.


As we learned four years ago, polling errors happen. One of this magnitude would be unprecedented. But this is an unprecedented election: the first held during a pandemic. The first in which a majority of votes will be cast before Election Day. And, most important, the first in which the president has made clear his intention to challenge legal votes in the hope that judges he appointed will declare him the winner.

“We’ll see what happens at the end of [Election Day],” Trump said Thursday. “Hopefully, it won’t go longer than that. Hopefully, the few states remaining that want to take a lot of time after Nov. 3 to count ballots, that won’t be allowed by the various courts.”

No law requires ballots to be counted, or winners declared, on Election Day. In fact, many states wait more than a month before certifying their results. The only thing different this year is that lots of people voted by mail, which means lots of ballots will get counted after Election Day. Since Democrats used absentee ballots far more than Republicans, what looks like a swing-state win for Trump on Tuesday could turn into a decisive Biden victory by Friday — the so-called blue shift.

That’s why Trump wants to shut it down.

Imagine that the Electoral College comes down to Pennsylvania. By state law, counties can’t begin counting absentee ballots until Election Day. Trump is almost certain to be ahead when the initial returns come in. When the blue shift happens, which it will, the president will cry fraud and demand that officials stop counting votes — especially absentee ballots that trickle in a day or two after the election. His campaign will sue. The case will go to the Supreme Court, where four justices have signaled that they’d at least toss the late arrivals — and that doesn’t include Amy Coney Barrett, whose confirmation Republicans rushed through explicitly for this purpose.

That’s just one disaster scenario. There are a hundred others. Absent a landslide, Republicans will besiege the courts with lawsuits, all seeking to disqualify ballots. Already, the GOP has spent $20 million on more than 300 lawsuits either attacking state laws designed to make voting easier or fighting efforts to expand ballot access.

In North Carolina, Pennsylvania, and Wisconsin, Republicans asked the Supreme Court to overturn absentee-ballot-deadline extensions. They succeeded in Wisconsin, and Justice Samuel Alito invited Pennsylvania Republicans to try again after the election. In Michigan, Republicans convinced state courts to uphold a state law requiring absentee ballots to be returned by Election Day. In Minnesota, the Trump campaign filed a lawsuit demanding that the state segregate all absentee ballots that arrive after Election Day, a forerunner to trying to get them disqualified; ludicrously, two Republican appointees on the 8th Circuit Court of Appeals — including a Trump appointee deemed “not qualified” by the American Bar Association over his “temperament issues” and “partisan loyalty” — agreed. In Nevada, the Trump campaign sued to stop absentee votes from being counted so that it could challenge ballot signatures, a capricious and arbitrary standard. Then the state party filed a separate lawsuit, seeking to bog down elections officials with demands for vote-counting information.


“It is deeply disturbing that — virtually everywhere — the concerted litigation strategy of the GOP is to make sure that fewer votes count,” the conservative writer David French observed on Thursday, one of few conservatives to acknowledge this obvious fact. tweet this
Pennsylvania Republicans got their state Supreme Court to ban “naked ballots,” or absentee ballots not placed in secrecy envelopes, which election officials worry might disenfranchise as many as 100,000 people. In Iowa, Republican legislators changed the law to make the absentee ballot application process more difficult, then the Trump campaign sued to disqualify 64,000 applications.

In Alabama, Republicans persuaded the Supreme Court to uphold a state ban on curbside voting following a lawsuit by groups representing the elderly and disabled. Republicans in Texas successfully fought to keep in place restrictions on who could vote absentee, and less successfully tried to ban drive-through voting in Harris County — i.e., Houston. After being rejected by the Republican state Supreme Court, Republicans sought an emergency injunction in federal court, again seeking to effectively disenfranchise 100,000 mostly Democratic Harris County voters just before the election.

Texas Governor Greg Abbott also limited each county to one ballot collection box, a move plainly intended to inconvenience urban areas. Ohio’s secretary of state signed a similar order limiting each county to one collection box; after a court struck it down, he amended the rule, allowing counties to have multiple boxes, provided they were all directly outside of the county’s elections offices. That decision is now tied up in federal courts. The Trump campaign sought to limit Pennsylvania’s use of drop boxes, as well, but the courts said no. And I haven’t even mentioned how the Supreme Court signed off on Florida’s poll tax for ex-felons.

I could go on, but you’re probably sensing a theme.

Every time, it’s the same story: Voting by mail, they say, has “the potential for widespread, scalable abuse.” That’s false, but who cares. We know that actual absentee voter fraud is vanishingly rare, but that’s beside the point. The argument is pretextual.

“It is deeply disturbing that — virtually everywhere — the concerted litigation strategy of the GOP is to make sure that fewer votes count,” the conservative writer David French observed on Thursday, one of few conservatives to acknowledge this obvious fact.

If we’re lucky, the margin of victory will be large enough to avoid the constitutional crisis Trump seems eager to provoke, and the conclusion to this four-year nightmare will prove graciously anti-climactic.

But even if that’s the case, we shouldn’t lose sight of the real story of 2020: The Republican Party tried to disenfranchise millions of people to maintain its grip on power, and its allies in the federal judiciary were more than willing to play ball.

Just because a coup fails doesn’t make it forgivable. As important, this crime against democracy must never be forgotten — no matter how furiously today’s Trump sycophants try to scrub away the stink tomorrow.