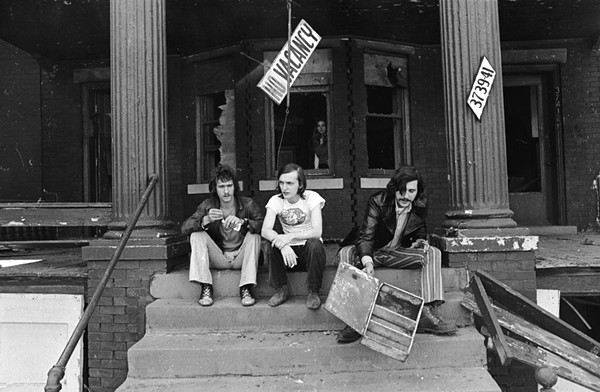 For J.J. Kramer, the chance to produce a documentary about Creem — the made-in-Detroit publication founded in 1969 that cheekily billed itself as "America's Only Rock 'n' Roll Magazine" — wasn't just a way to learn more about something that came long before his time.

It was also personal. His father, Barry, the magazine's founder and publisher, died in 1981 when Kramer was just 4 years old. By 1989, the magazine had ceased publication.

To dig into Creem's history, then, was the only way Kramer could learn more about his father. That story is told in the Scott Crawford-directed doc Boy Howdy! The Story of Creem Magazine, which gets its Michigan premiere next week as part of the Freep Film Festival, following its world premiere at SXSW.

"This whole thing has been a journey to learn a little bit more about my father and this group of misfits — who somehow published this iconic and now legendary rock 'n' roll magazine that started being sold out of the trunk of my dad's car," Kramer says.

Aside from the elder Kramer, those "misfits" included Dave Marsh, an editor who once described himself as "a skinny 19-year-old suffering from overexposure to LSD and the MC5"; the late rock critic Lester Bangs, whose freewheeling, unconventional writing style imitated the chaos of the music he was writing about; and Jaan Uhelszki, who also started writing for the magazine as a teen, and serves as the doc's co-writer. The magazine also got street cred from R. Crumb, the underground comic artist who designed the magazine's mascot, an anthropomorphic milk jar named Boy Howdy (allegedly in exchange for just enough money to get a shot of penicillin).

They all get plenty of screen time in the film, along with some of the magazine's high-profile fans — including, but not limited to MC5's Wayne Kramer, filmmaker Cameron Crowe (a former contributing editor who immortalized Bangs in his film Almost Famous, where he's played by the late Philip Seymour Hoffman), the Red Hot Chili Peppers' Chad Smith, Jeff Daniels, Ted Nugent, and REM's Michael Stipe. But what the film also does is make the case that a magazine like Creem could rise nowhere other than Detroit.

"It wasn't on the coasts, where it was much easier to have access to certain things," Kramer says. "Detroit defined this magazine as much as any of the artists and writers did. It was like the gritty, blue-collar, 'don't suffer fools gladly' approach to music journalism."

Creem's proximity to the Motor City music scene, as well as its isolation from tastemakers like New York City and Los Angeles, afforded it both a level of authenticity as well as irreverence. But the common thread was a love of rock 'n' roll music.

'Detroit defined this magazine as much as any of the artists and writers did.' —J.J. Kramer tweet this

"I can't tell you how many people in their interviews have said things like, 'You know, Creem connected me to music in a way that nobody else did," Kramer says. "And that's because the writers at Creem were really fans first and writers second."

Its writers would mercilessly lampoon anything they didn't like — which meant at its worst, Creem could be sexist and homophobic. Joan Jett allegedly once stormed the Creem offices to beat up a journalist who wrote a mean review of the Runaways. ("These bitches suck.") As Uhelszki (who, thanks to Creem, became one of the first women in rock journalism) explains in the film, "It was the '70s."

In its heyday, the magazine was second only to Rolling Stone in terms of circulation. But at numerous points, Creem's rock 'n' roll ethos threatened to fold the entire operation. Kramer decided to close the magazine's Cass Corridor offices following an armed robbery, making a bizarre decision to relocate the magazine to a 120-acre farm in Walled Lake, where the publisher and writers would share a house as part of a hippy-ish commune. But the staff weathered the tensions of living together for two years, and the magazine's success meant Kramer was able to move the magazine back to civilization, into offices in downtown Birmingham.

The doc has its origins in 2016, when Kramer, now an intellectual property attorney for Abercrombie & Fitch, was approached by director Scott Crawford, another former Creem editor. "I had been approached over the years about doing docs, and it just never really felt like the right fit," Kramer says. "It was either creatively, I didn't agree with the vision, or just bad vibes in terms of where it might go. But Scott immediately understood what Creem was about, and we shared the same vision of what the documentary could and should be."

They launched a Kickstarter campaign to raise funds, and apparently so many people wanted to donate to the project (or buy a nostalgic Boy Howdy T-shirt) that they surpassed their goal.

"I was kind of thinking of it as this little passion project," Kramer says. "It went from this passion project to a real movie, which is a surreal experience because it's my first foray into producing a doc."

Steve Byrne, a Free Press entertainment editor and the festival's executive director and co-founder, says the film was the perfect way to kick off this year's event. "It's a perfect fit for the opening night for our festival," he says. "It's a lot of fun. It's very interesting on a lot of levels — the dynamics that were making that magazine go, and that clearly it's very much a Detroit story, which is something that we try to embrace."

The fact that it makes its Michigan premiere in the Fillmore theater, which has its own rich history as part of Detroit's rock scene, is not lost on Kramer.

"To me, it's like the perfect ending to this story," he says.