Review: New restaurant Gather is a welcome addition to Gratiot

A welcome focus on affordability is driving the newest entrant on the voguish Gratiot block that also houses Trinosophes and Antietam. "We couldn't afford to go out much in the last year ourselves," co-owner Kyle Hunt says, referring to him, wife Leah, and chef Nate Vogeli. "We wanted to make it a place that anyone would be able to come to."

On a recent evening my party of three spent $75 on five dishes, a drink, and a tip.

The goal, says Hunt, is for the diner to be able to order any item and make a meal of it. That would include a bowl of wings, a burger, a Caesar, various iterations of mixed vegetables, tomatoes with feta and almonds, and three types of mussels — all from a vegetarian-friendly but eclectic list. Much of the fare comes from Eastern Market across the street.

I'd say the trio is succeeding at their affordability goal.

Diners in the compact space sit at three steel communal tables, and there's nothing on the white walls except Kyle's 49-star American flag, manufactured during the hot minute when Alaska was a state and Hawaii wasn't. Fans keep the place cool without AC. 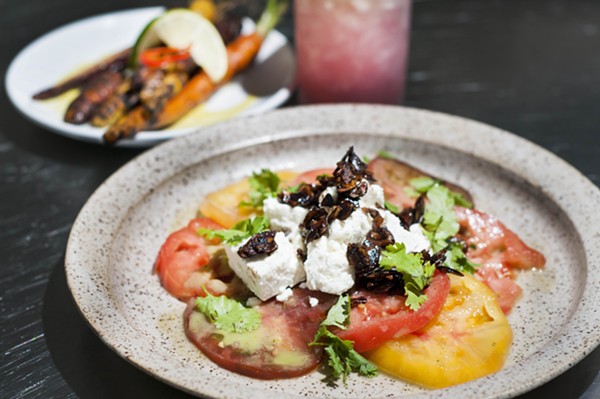 Those steel tables may contribute to the noise levels, which is my only beef with Gather: When the place is packed, it is loud.

So come prepared to shout; the food is worth it.

Emblematic is a bowl of 10 charred wings with Buffalo sauce and celery yogurt. I asked my Buffalo-native companion whether they were authentic and he said, "Better than authentic." Meaty and at a good spice level, they benefit from a high-caliber yogurt laced with celery seeds.

Even better is char-braised pork belly with cabbage: thick, crisp, rich, fatty. I would order this again every time.

Thick ribbons of pasta with grilled vegetables come in a heavy lemon sauce that's almost vanilla-y in its subtlety, which coats big chunks of zucchini, squash, tomatoes, and scallions.

The chuck-short rib-brisket burger is smallish but served with crisp red onions that are cooked enough to be sweet but still with onion bite. A creamy malt vinegar aioli obviates any thought of red or yellow condiments. The BLT served for Saturday lunch is stacked high with musky bacon, far more generous than the norm. Both come with tangy pickled carrots and chewy, not-too-sweet sweet potato fries.

I thought the eggplant could have been further cooked — it needs to be taken to within an inch of its life to bring out eggplant goodness; otherwise it's a whole nother flavor and texture. But the hunks of mild feta that come with are definitely superior.

One night the dessert on offer was mulberry ice cream sandwiched between crisp oatmeal cookies, with a side of whipped cream and two tiny mint leaves. If I'd known mulberries were so capable of tastiness, they wouldn't be covering the ground in my backyard. 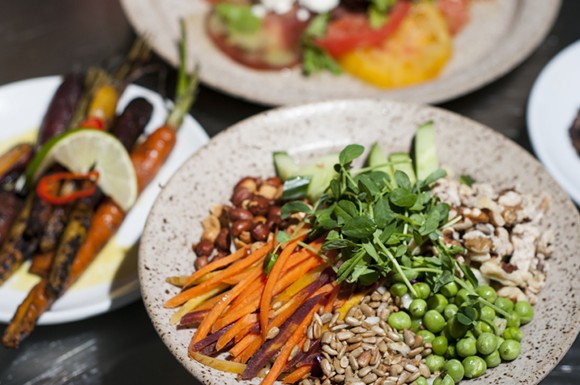 As to drinks: They arrive quickly. I'd been advised recently to get over my negativity toward rosé, so I ordered the Hooray Rosé slushie. It confirmed my opinion of rosé but was still refreshing on a summer afternoon. Likewise on the mild and pale pink Rhubarb Mule, barely sweet, with vodka, ginger ale, lime, and a stalk of rhubarb as swizzle stick.

Other drinks are a passionfruit white beer from Denmark; a pale ale made from rice by Stillwater Artisanal; a basil gimlet; mimosas on Saturdays; and a couple of reds and whites that look like some thought was put into them ($20-$28 for a bottle).

Gather doesn't take reservations. But if you have to wait, I guarantee that Leah, the hostess, and Kyle, behind the four-seat bar, will make the delay OK. It adds to the Gather experience that they are clearly having such a good time. (Let's assume that chef Nate is, too, as he surveys the happy throngs.) Both Hunts are welcoming in a thoroughly nonpretentious and genuine way. It's odd, then, that they chose to grace their menu cover with the iconic 1910 photo of mean-guy Ty Cobb stealing home, spikes high. 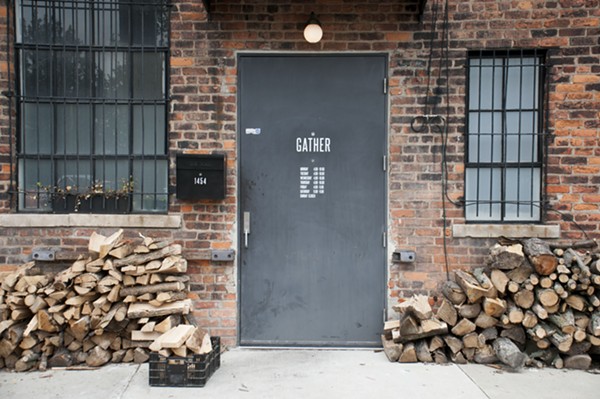