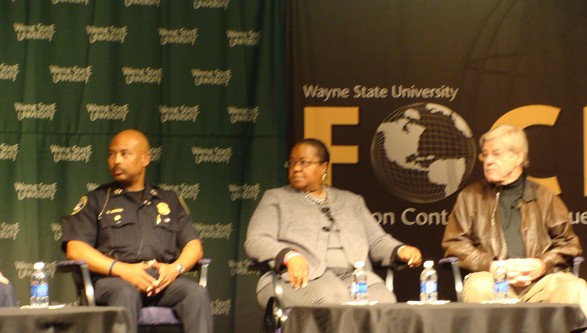 Last spring I got all excited after reading a book titled Don't Shoot, by David M. Kennedy. Subtitled One Man, a Street Fellowship and the End of Violence in Inner-City America, the book details how Kennedy and others developed and employed innovative strategies that significantly lowered gun violence and street-corner drug dealing in Boston, Baltimore, Cincinnati and other such cities. I wondered why aren't we doing that right here in Detroit.

I got my answer last week at Wayne State University's two-day event "City Under Siege: A University Forum on the Crime Crisis in Detroit." There, I found out that we are trying Kennedy's approach in Detroit. Or we'll be doing so soon. It turns out that, while my mind was reeling at what I thought was a disconnect between policing in Detroit and in those other cities, folks here were actually putting together the plan to make that connection a part of the city's Preventing Youth Violence program. In fact, at the time, a neighbor on my block was writing the grant application to the U.S. Department of Justice to implement the "cease-fire" initiative. The application was successful, and the DOJ granted the city $1.5 million to fund part of the initiative for the next three years.

It wasn't the focus of the forum, but Detroit Police Chief Ralph Godbee told me that the team from Kennedy's Center for Crime Prevention and Control in New York would be in Detroit in three or four weeks to begin consulting with the Detroit team. This approach doesn't get overnight results — anything that purports to do that should not be trusted — but it starts in one neighborhood and builds from there. It's not just reacting to crimes that have already been committed; it's about preventing crimes from happening in the first place. In Don't Shoot, Kennedy wrote about the realization that brought him to the cease-fire strategy while working in Boston in the early 1990s:

"Two clear themes ... were emerging ... One was the ignorance gang members had about the legal risks they faced. The other was how scared they were."

Apparently gang members who grow up in the crime-ridden hood don't realize just how illegal the things that they do are and what penalties they potentially face, especially at the federal level. The federal angle is key here, but I'll get into that later. The other thing is that the majority of the gang members are not really badasses. They are in the gang for protection, and they act tough because that's what they think they're supposed to do — an act of solidarity with their partners in crime. It could be just one guy in a gang who drives the action by committing or exhorting others to commit violent acts.

Those don't seem like earth-shaking revelations, but they've led to strategies that seem to work. Kennedy's idea was simple, identify the worst guys out there — pretty much everybody in a neighborhood knows who they are. The point is that there are actually not that many of them.

The cease-fire program targets the bad guys. Police build a portfolio on them, which is typical. What is not typical is that police then call them in for a meeting. The meeting may be attended by significant others such as parents or other family members, the minister at the local church, family members of murder victims – anybody that police think has a chance at reaching them. The police explain to the gangbangers the effect they are having on their community and let them know that it will no longer be tolerated. Police pull in various social service agencies and have someone who can walk the offenders through how to get help, be it substance abuse or job training or other aid.

This sounds a little Pollyanna-like, but there is an iron fist in the velvet glove. The impetus to change is underscored by the threat of federal prosecution. Police let these guys know that if they commit another crime police will come down on them hard with federal charges. Federal charges mean that the perpetrators will not be going to state prison with their homies. They are going to federal prison far away where they don't know anybody and won't get a warm welcome from friends.

The program is a partnership that extends from community members all the up to the federal government. It creates a better relationship between police and community members, who by and large have little trust for each other under the status quo. These better relationships grow from a realization that police are not trying to send everybody in sight to jail; the goal is to stop the shooting and therefore the fear so that normal community behavior can take place.

Another angle on this is that much of the violence is driven by bullshit beefs and retaliation. Stuff like: You're going out with my partner's ex-girlfriend so that means I have a problem with you; or, we think you shot at one of our guys last week so that means we're going to shoot at you; or, you stepped on my new kicks so I've got to shoot you for it or lose status with my guys. The bottom line is these are things that someone can learn to let go.

The second half of Don't Shoot is dedicated to a related strategy to get rid of open-air drug markets. Kennedy describes how he convinced police to investigate street-corner drug dealers, build a case on them — and then not arrest them. Police call them in, show them that they have enough evidence to arrest them, and then tell the drug dealer to stop it. It they go out on the corner again they will get the book thrown at them. This is also accompanied with community members and social services support. It seems to work.

I asked Godbee if he was going to build cases against drug dealers and then not arrest them. His answer was a forthright, "No." At least for now, Detroit will apparently only get the cease-fire portion of the program. That will be difficult enough. Getting police to change the way they think and behave will be tough, let alone the criminals. It will also be tough for communities when members realize a different neighborhood from theirs is getting the program. But that's how it works: start in a very ugly spot and build out from there.

Godbee pointed out that in the past there has been a problem with interagency cooperation because there is competition for who gets credit. Moving forward he said, "When the criminal justice system works, we all get credit."

Other than the cease-fire stuff, there wasn't a lot to get me excited at the forum. But I did get the impression that Chief Godbee may well be one of the good guys. During the three-and-a-half years of Mayor Bing's administration, police department compliance with its 2003 federal consent decree has gone from 29 percent to 85 percent. Godbee has been chief for two of those years and was assistant chief under Warren Evans. That shows what you can do when you actually want to do it.

"Until you admit you have a problem you can't start to solve it," Godbee said.

Hmm ... could that be one of the 12 steps to getting Detroit back on its feet?