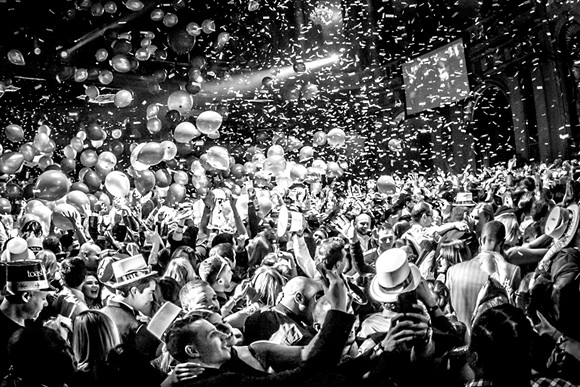 Resolution Ball
@ The Fillmore
Well, Detroit seems to have a New Year’s Eve shindig for just about every kind of person — like the kind of person who has done some pregaming and will also say things like, “Let’s do shots, bro.” There will be live entertainment, plus stilt walkers, confetti explosions, a Champagne toast at midnight, a confetti explosion, party favors, pizza, and a chocolate buffet. The Times Square ball drop will broadcast on six giant screens so everyone can count down.
Doors open at 8 p.m.; 2115 Woodward Ave, Detroit; 248-543-1000; resolutionballdetroit.com; Tickets are $125-$150.

The Dirtbombs
@ The Magic Stick
The Dirtbombs are definitely one of the best live bands from the last few decades. They’re one of those bands that everyone has a story about — usually about the supercharged, high-energy shows the Mick Collins-led combo is known for. If you haven’t heard of them (which is frankly unbelievable, but maybe you just moved here from Greenland, and are 10 years old), you’ve got to hear “Underdog.” It is hands down one of their best tracks, and if you listen to a live recording of that bad boy, you’re going to be itching to go see the band for yourself. There could be no better way to hightail it on out of the year than banging your head like the most exalted hesher to “I Can’t Stop Thinkin’ About It.” The Dirtbombs are just another band that proves Detroit does every genre of music better than anywhere else could dream of.
Doors open at 9 p.m.; 4140 Woodward Ave., Detroit; majesticdetroit.com; Tickets are $20 in advance and $25 the day of.

Rockin’ NYE Ball Drop with Sponge
@ Downtown Wyandotte
Isn’t Wyandotte just adorable? Anywho, things are about to get even cuter, with the start of their very own NYE tradition. They’re shutting down Biddle, setting up a huge heated tent, welcoming local rockers Sponge, and dropping a 1,000-pound ball outfitted with 288 flashing lights to celebrate the birth of 2017. A special ball drop will take place at 9 p.m. for families and children, and the main event will take place at midnight. A VIP party and an exclusive meet and greet with Sponge will take place at Whiskeys on the Water.
The event starts at 6 p.m.; Biddle Ave.; rockinNYE.com; VIP event is $50.

Electric Six
@ Saint Andrew’s Hall
Electric Six has been rocking Detroit since 1996, and even though members of the band come and go, the level of radness stays the same. They’re sorta new wave, sorta punk rock, and definitely legendary for the city. Since 2003’s Fire, they’ve been recognized internationally, and the group’s success seems to just keep growing. This year, the band released Fresh Blood for Tired Vampyres, which they’ll definitely perform, along with their billion other albums, as 2016 closes out.
Doors open at 9 p.m.; 431 E. Congress St., Detroit; saintandrewsdetroit.com; Tickets are $20.

Mega 80s New Year’s Eve Bash
@ Magic Bag
2016 was a shitshow and it doesn’t look like 2017 is going to be much better, so why not celebrate the late great decade of the 1980s in lieu of ringing in the new year. Mega 80s is metro Detroit’s resident ’80s band, and this NYE they will perform a whole new set of nostalgic tunes. The band will be in full ’80s regalia and you’re invited to feather your bangs, crop your top, and sport those Jordache jeans you’ve been hiding in the back of your closet.
Doors open at 8 p.m.; 22920 Woodward Ave., Ferndale; themagicbag.com; 248-544-1991; tickets are $35 in advance.

Freakish Textures
@ Marble Bar
Let’s do some math. This electronic music event doesn’t start until 9. And even though there’s music across two stages (one indoor and one outside on the heated patio), we’re still looking at a lineup of at least 14 DJs, like Ectomorph, DJ Minx, Macho City’s Scott Z, and more. What that means is that this show will extend way into the wee hours of 2017 — and we’re told that breakfast, mimosas, and Bloody Mary’s will be served. You know what to do.
Starts at 9 p.m.; 1501 Holden St., Detroit; facebook.com/marblebardetroit; $10 presale, $15 before 1 a.m.

Country Club Disco NYE
@ Grasshopper Underground
You won’t find the traditional (read: douchey) NYE accoutrements at Grasshopper Underground, so if you’re looking for that atmosphere, we suggest checking out other places on this list. You can expect Golf Clap, Country Club Disco, Pontchartrain, Ghita Sisters, and Players Club to spin. There will be a requisite Champagne toast at midnight, plus free sliders at 2 a.m.
Doors at 9 p.m., 22757 Woodward Ave., Ferndale; thegrasshopperunderground.com; 248-298-0330; serving until 4 a.m., 21 and older free before 10 p.m. with RSVP; 18 and older; general admission $10.

Tunde Olaniran
@ El Club
Hailing from Flint, Tunde Olaniran calls himself “a cultural warrior with a four-octave range and a penchant for dirty synths,” which just about sums up the unique electronic/R&B artist. As we all know, he’s some kind of uncanny marriage of Marvin Gaye and Bjork — just poppy enough to appease those looking for a radio-sound, but he’s interesting enough that you don’t know what he’s going to do next. His shows are glam-rock, high performance in quality, and they definitely keep the party going. This time, that party just happens to be ringing in the new year. And thankfully, his hits have earned their right to be called hits. From “Brown Boy” to “Transgressor,” Olaniran has it going on. Like I said before, his live persona and performance in pretty damn engaging, and it’s pretty different from other electronica shows. On his SoundCloud he’s called “the fictional lovechild of Prince, Kanye, and Robyn,” which might actually be a better way to conjure his fierce, alien talent.
Show starts at 8 p.m.; 4114 W. Vernor Hwy., Detroit; elclubdetroit.com; Tickets are $10.

The Music of Prince: Party like it’s 1999
@ Detroit Symphony Orchestra
2016 wasn’t a great year to be an iconic musician. David Bowie, Leonard Cohen, and Prince all kicked the bucket, and even though we’re really not supposed to say this, we’re going to miss Prince the most. The flamboyant musical genius will be honored during this special event that will be broadcast live on Detroit Public Television. Patrons will be treated to orchestral arrangements of Prince’s greatest hits performed by the Detroit Symphony Orchestra.
Doors open at 8 p.m.; music starts at 10 p.m.; 3711 Woodward Ave., Detroit; dso.org; tickets start at $70. Live webcast starts at 10 p.m. at dso.org/live.

New Year’s Eve
@ Necto Nightclub
If Ann Arbor is your destination, you can’t do a lot better than Necto for a night of drinking and dancing on New Year’s Eve. DJ Hardy, Nick Donovan and MC Yoda will spin top 40 and house music in the Main Room while Ayinde Audio will play ’80s, ’90s, and ’00s in the Red Room. Expect the typical NYE accommodations like a balloon drop at midnight, NYE party favors, and snacks and pizza after midnight. VIP tickets include Champagne at midnight, seating, and bottle service.
Doors open at 9 p.m.; 516 E. Liberty St., Ann Arbor; 734-994-5835; necto.com; tickets are $30 at the door for 21 and older; $50; for those 18 to 20; VIP tickets start at $90; open until 4 a.m.

New Year’s Eve with the Rootstand
@ Ann Arbor Distilling Co.
Not every New Year’s Eve party needs to get totally hyphy. If you’d rather spend the night sipping locally made cocktails and listening to the strumming of a locally beloved group, then this might be a good choice for you. Rootstand featuring Brennan Andes and Ross Huff of the Macpodz will perform, and Sweet Melissa will open the show. The distillery will be open for extended hours this evening only.
Starts at 4 p.m.; 220 Felch St., Ann Arbor; 734-882-2169; annarbordistilling.com; tickets are $10 in advance and $15 at the door. 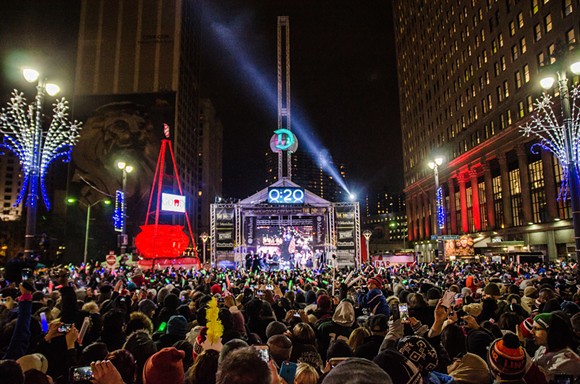 Motown Countdown VIP Party for Meridian Motor City NYE - The Drop
@ Campus Martius
Some people aren’t satisfied being cooped up in a warm, festively decorated party with lots of booze. They’d rather spend it outside in subzero temperatures. The Drop is for those people. And the Motown Countdown, a VIP party, is for those who want to do all that, but more luxuriously. With two stages and two dance floors, there’s plenty of room for everyone to boogie down.
The event starts at 8 p.m.; Cadillac Square, Detroit; 313-355-0413; motorcitynye.com; Tickets are $85.


AXIS Lounge, MGM Grand Detroit
Live music and cocktails await those who visit AXIS Lounge inside MGM this NYE. DJ Whip spins from 7-9 pm., Ben Sharkey sings from 9 p.m. to 1 a.m.
Starts at 7 p.m.; 1777 Third Ave., Detroit; mgmgranddetroit.com; 21 and older only; no cover; table reservations can be made at nightlife@det.mgmgrand.com.

Palazzo Grande
Dine on filet mignon in zip sauce along with other accoutrements before dancing and drinking the night away. There will be live music by Eclipse, a premium bar, Champagne toast, and late night snack buffet.
Event starts at 7:30 p.m.;54660 Van Dyke Ave., Shelby Township; 586-731-2100; thepalazzogrande.com; Tickets are $100.