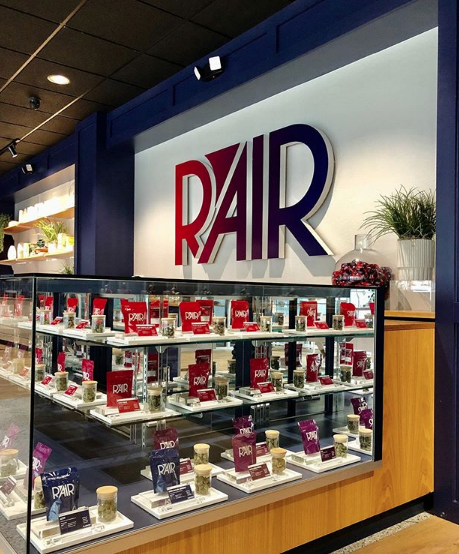 No dirt? No problem!

An old laundromat in Bay City is letting it all hang out as it is now an adult recreational and medical marijuana dispensary, offering sticky icky grown in-house and aeroponically — meaning no dirt — just air, and free dangling roots.

Jackson-based Rair, which opened its $1.5 million spot at 3772 Wilder Rd. last month, is the latest to color Michigan's canna-buisness landscape. It has plans for additional locations in Muskegon, and, in 2021, shops in Lowell, Big Rapids, Kalamazoo, and Reed City, MLive reports.

The staff behind Rair believes what they do is, in fact, rare, and could be the only aeroponically-grown herb in the state.

“Obviously we grow aeroponically, so it’s a little bit of a play on words," director of retail operations Molly McFadden told MLive. “But we really did want to focus that we are ‘rare’ … that we do things differently, that we’re focused on being somebody that is above and beyond as well as making other people feel comfortable to be in the store.”

The state-of-the-art growing process, as described by Leafly.com, requires a specific grow setup consisting of a reservoir and planter bed, which allows roots to be suspended in the air. Plants are then misted with water and nutrients regularly to ensure the weed gets everything it needs. At Rair, the entire grow cycle takes about 10 weeks before they're harvested.

Anyway, Rair is doing something else that is considered kind of rare in the weed biz — making a concerted effort to put women in leadership roles within the company, including retail, cultivation, and processing positions.

As of right now, Rair's menu offers a selection of flower, prerolls, concentrates, edibles, and vape cartridges. Items can be ordered in advance for in-store pickup.