Windows to the past. 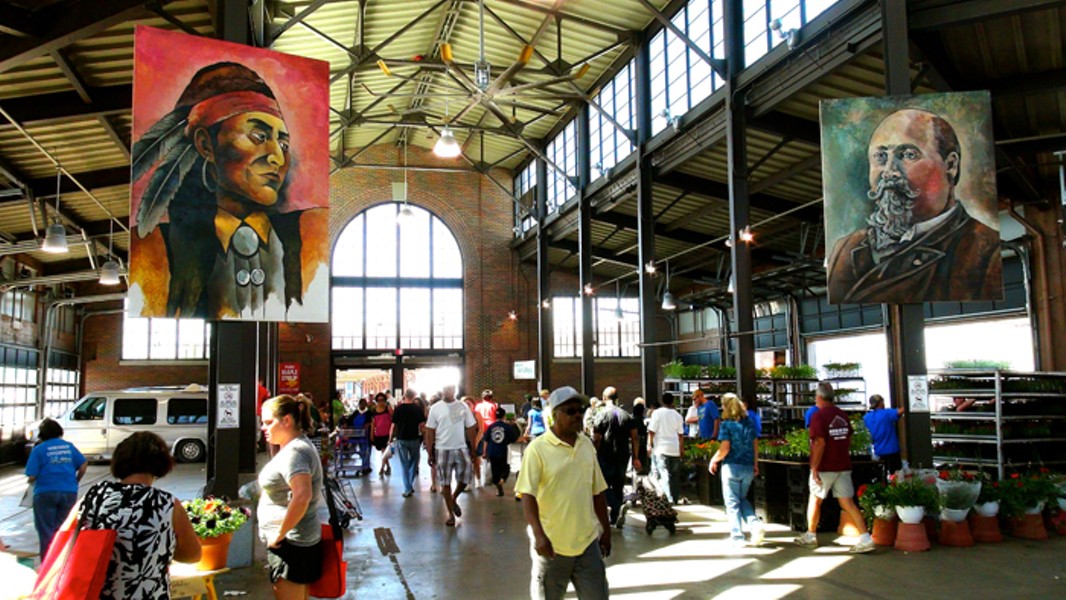 “They’re kind of on a road show right now, so to speak,” artist Nicole Macdonald says of her latest painting series. A group of portraits, Macdonald’s paintings depict Detroiters from all throughout history, from the well-known to the obscure. Figures like Rosa Parks are shown alongside the likes of Chief Pontiac, gang-member-turned-activist Yusef Shakur, and Charleszetta Waddles (aka “Mother Waddles”). Folks at Eastern Market caught wind of the project and decided to install them on-site to kick off their new Sunday market this month. Later, the paintings will utilize Cass Café’s ample wall space from mid-July to mid-September. But the ultimate resting place of the paintings was always intended to be an abandoned, gutted-out warehouse at Grand River Avenue and Maybury Grand Street, where they’ll be used to board up the structure’s 7-by-10-foot windows.

“Its facade is so beautiful; it’s kind of orange brick and there’s some ornate brickwork on the front. It kind of works as a billboard,” Macdonald says. “It leans over [Grand River], so we thought it would be a neat place to have a wall of portraits.” The paintings are slated to be installed in the warehouse’s 17 windows in late September.

The project started in December when Macdonald was inspired by the 1980 book A People’s History of the United States by progressive historian and political scientist Howard Zinn. The book is celebrated for its alternative view of history, and Macdonald wondered if she could tell a similar story focused on just Detroit. “The idea is to tell history in a different way, not from the winners’ perspective, but maybe from people who experienced the events on the ground,” she says. “[I wanted to show] everyday kind of people, people who fought on behalf of their fellow citizens.”

Macdonald admits it was challenging in deciding which subjects to represent in her series, but says she focused on exhibiting “sacrifice and diversity” above all else. “The idea isn’t just to reflect obscurity,” she says. “There’s a lot of well-known famous people who have held positions of power that have fought and put themselves on the line.”

Macdonald describes her paintings as Fauvistic, saying she was trying to make them “animated, with a heightened sense of color.” Researching the project has been a particular interest to her. “I like investigating what these people look like, which is kind of an easy thing, but also investigating their whole backstory,” she says.

The series is a bit of a shift for Macdonald, who had been painting landscapes in recent years. “I was living on Peterboro Street and Cass and staying in this really small room, painting these small landscapes of the surroundings,” she says. “It was a lot of representations of the Scott Mansion, which I lived next door to, and that area of space. Lots of old Victorian structures.” Macdonald had been painting in oil, but her current batch of portraits are done in acrylics in order to withstand the elements, and Macdonald is coating them with a waterproofing sealant to further protect them. In addition to painting, Macdonald is also interested in film; she shot a documentary on Belle Isle that will be showing in Windsor at the Media City Film festival next month.

When asked about the risk of placing precious portraits in an abandoned warehouse, Macdonald says it doesn’t matter. “The whole point is to reach people,” she explains. “I’ve done a lot of things where it’s just for me, myself, and I, or a friend, or an event. The intention with this is I want all Detroiters to be interested and engaged from seeing someone they recognize — like ‘Oh, I recognize that person, but I don’t recognize the person next to them. Maybe I should.’”