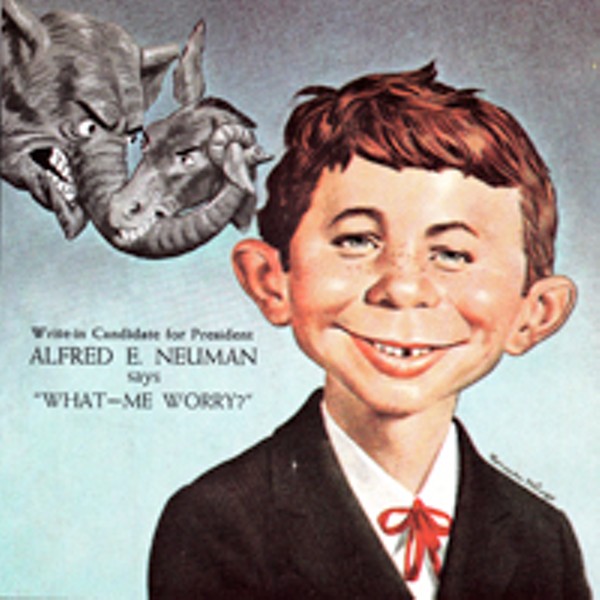 Thursday • 17
Thomas Werner
COMMERCE VS. ART
What's the diff between a fine art and commercial photographer? Will your work for a magazine ever make it into a museum? And how the hell do you make money without making yourself absolutely miserable shooting stills for some cheesy catalog? Sit down for a session with Thomas Werner, director of the BFA program in photography at New York's Parsons School of Design. This panel discussion also features special guest photographer Bill Schwab, whose work is included in the collection of the seminal George Eastman House, the world's oldest photography museum, founded by the man behind Kodak. The panel discussion is 6:30-9:30 p.m. at Firefly Studios, 1363 E. Fisher Freeway, Suite 8, Detroit; 313-259-4460; $35 for students with ID.

Thursday • 17
The Walkmen
CANDIDATES FOR PRECEDENT
Here's why the Walkmen are the coolest rock 'n' band on the planet. In 2006, the NYC quintet remade Nilsson's Pussycats, in its entirety, note for note, complete with what appears to be a worthy estimation of the original booze-fueled sessions and high jinks. At first, you'd think the Walkmen are such nice boys too — all grins and suits and copped Carnaby Street dandyisms and shit. But wait: There's boozy joy and hardened hook-writing beneath the band's ironic, posh stance, as well as worthy nods to, oh, Tom Verlaine. Their sensibility careens and dives and comes up for gulps of air at the precise moment you think it'll all drown under its own singsong din. It's kinda like what the Velvets did. Some songs soar too, would even do Eno proud. So, yeah, the Walkmen are with precedent — some have even claimed Joy Division — but we hear a totally in-the-moment rock 'n' roll band with a good record collection and brilliant live show. At the Crofoot, 1 S. Saginaw, Pontiac; 248-858-9333.

Friday • 18
Talib Kweli
SOLD-OUT, NOT SELLING OUT
Shush, peanut gallery, he hasn't sold out. Talib Kweli is one of hip hop's few artists embraced both by critics and the (informed) mainstream for spitting intelligent, intelligible lyrics and for bestowing certain intelligence on hip hop. Formerly a member of the notable group Black Star, along with DJ Hi-Tek and Mos Def, Kweli embarked on a solo career in 2000. Since, he has dropped five albums, the most recent being 2007's Eardrum. Hear words worth listening to and repeating from the "futuristic lyricist, straight from the Renaissance" at St. Andrew's Hall, 431 E. Congress, Detroit; 313-961-6358.

Saturday, Sunday • 19, 20
African Footprint
WORLD OF MOVEMENT
Following the unfortunate tradition of pairing everything non-Western with a Western counterpart, African Footprint has been described as the "Riverdance of Africa." But as a rich history of South Africa involving poetry, traditional dance and music, African Footprint doesn't need allusions to Michael Flatley. It's like nothing you've seen before: Traditional and modern dances like the Kwela-jive, traditional gumboot and hip-hop pantsula will be performed. At the Detroit Opera House, 1526 Broadway, Detroit; 313-237-7464.

Saturday • 19
Shania Twin
MAKE ME FAMOUS
The twin to Twain's a rising star, or at least in terms of cover acts. Because according to Shania Twin, née Donna Huber, the faux celeb's many media credits include articles in the National Post, CMT, National Enquirer, and an appearance on National Enquirer TV. Huber will belt Twain's populist repertoire at 7:30 p.m. in the Meyer Theater of Monroe County Community College, 1555 S. Raisinville Rd., Monroe; 734-384-4272.

Sunday • 20
Hair Wars
TRESSED TO IMPRESS
Sure, the moniker "Hump the Grinder" leaves little to the imagination. But remove the prurient angle, sicko, and you really gotta wonder what someone who's chosen that name for himself, well, does. Hump, also known as David Humphries, is the mastermind behind Hair Wars, which began in Detroit nightclubs in 1985, and is now one of the country's largest hair-styling shows. Watch models strut the catwalk with towering, Technicolor dos at the Northfield Hilton, 5500 Crooks Rd., Troy, 248-879-2100.

Sunday • 20
New Music Detroit
REMEMBERING STOCKHAUSEN
Karlheinz Stockhausen's obits last month underscored that the 79-year-old avant-garde giant has been more read about and heard about than heard (despite being an influence on many — from Zappa to Sonic Youth to Miles Davis). Stockhausen is hardly the only classical composer in that situation, and part of the mission of the ensemble New Music Detroit is to help rectify their plight. NMD performs two Stockhausen pieces featuring saxophonist Erik Ronärk, an instrumental improv based on his vocal work "Stimmung," Steve Reich's classic "Drumming" and Nico Muhly's "Time After Time." Brunch with Bach series in the Kresge Court, 11:30 a.m. at Detroit Institute of Arts, 5200 Woodward Ave., Detroit, 313-833-7900; $30 brunch seating, $10 stairs.

Sunday • 20
Grey Boy Allstars
REMEMBER ACID JAZZ?
Back in the day (i.e., the acid jazz era, circa 1993), these guys got together to celebrate funky music from back in an earlier day (i.e., the soul jazz era, circa 1973). Circa 1997, they started to wind down for a decade. Which makes their current reunion era (circa 2007) — and last year's CD, What Happened to TV? — sort of retro-revivalist funk. Or is that revisionist-revivalist? Or revivalist-retro? Or reunion-revivalist. But saxophonist Karl Denson, guitarist Elgin Park and friends are about the funk, no matter the modifiers. With Afro-beat percussion whiz Leon Mobley. Magic Bag, 22920 Woodward Ave., Ferndale; 248-544-1991.

Wednesday • 23
Alfred, We Hardly Knew Thee
IT'S A MAD, MAD WORLD
As if you needed more reasons to believe Mad Magazine matters, the Ford Gallery at EMU offers "Alfred, We Hardly Knew Thee," through Feb. 8. On Jan. 23, John Hett, editor and publisher of The Journal of Madness, a quarterly about the sociocultural impact of Alfred E. Neuman and Co., speaks. 7 p.m. at the Ford Gallery, Eastern Michigan University, Ypsilanti, 734-487-1268.