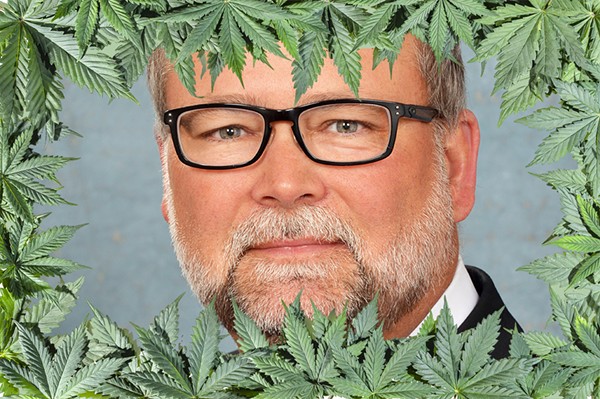 It should have come as no surprise that former state Senate leader Arlan Meekhof stepped out of the legislature and right into the marijuana consulting business. The trend of former politicians becoming industry representatives is becoming well-known.

While in office, Meekhof was part of creating the laws that govern how the medical marijuana industry is administrated. But Meekhof may have broken the very laws he helped pass in support of three clients with the old Medical Marihuana Licensing Board. According to a report on Bridge magazine, in February Meekhof sent an email to his clients' lawyer and some state officials saying that he had spoken to MMLB chair Rick Johnson and had an agreement to place the three clients on the licensing agenda for the board's March meeting. Meekhoff recommended Johnson for his board membership.

The information in the email, obtained through a Freedom of Information Act request, says that Johnson agreed to speak to Andrew Brisbo, then director of the state marihuana regulatory agency, about the agenda. This brings up a number of questions, including the integrity of the licensing process while the licensing board demanded the highest integrity of marijuana business applicants, conducting deep background checks of their legal and financial lives.

Gov. Gretchen Whitmer recently replaced the board and the rest of the medical marijuana administration with the new Marijuana Regulatory Agency. Brisbo is now head of the MRA.

At the very least, Brisbo should have to answer some questions about influence peddling in the old MMLB and take steps to keep it out of the new MRA.