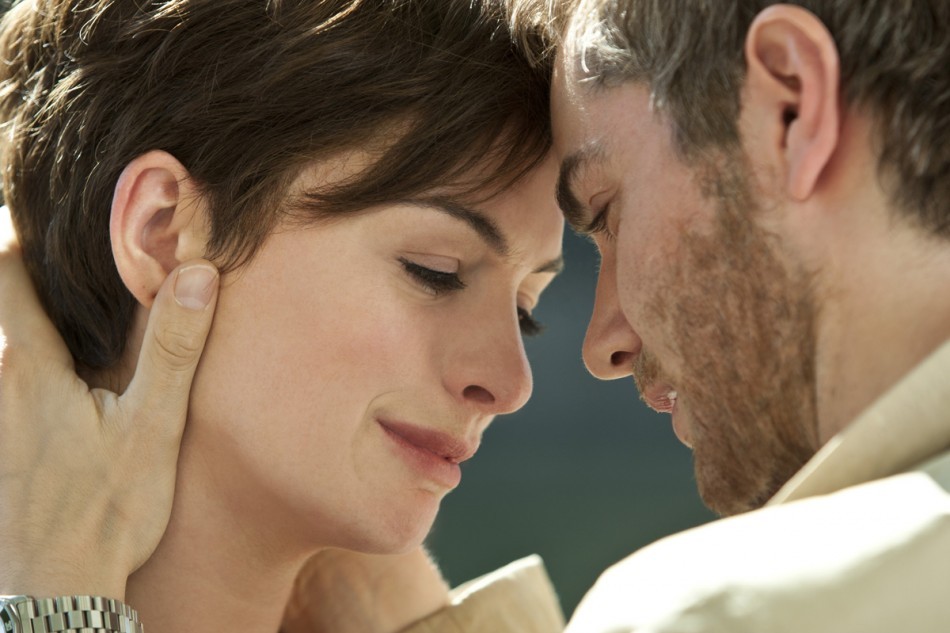 Beautifully composed twaddle about well-to-do-twits, One Day is an experiment in romantic comedy deconstruction that accidentally discovers anti-chemistry. The normally enchanting Anne Hathaway tries hard to be frumpy and attempts an accent that cantilevers between posh and Liverpudlian, but is intended to be Scottish. She's paired with Jim Sturgess, the forgettably handsome brooder from Across the Universe, a decent actor saddled with a shallow role.

We meet this duo on their college graduation day, July 15, 1988, as they flirt, fight and then very nearly complete a drunken hook-up, but end up in a cuddle puddle instead. The movie then engages in a more upscale spin on the pet theme of the year: Can a man and woman be friends and lovers? The answer is spread out over two decades, but the film's big gimmick is that we only get to peek at would-be couple on July 15 each year, assuring that the wardrobe department saves big on overcoats and mittens.

Life slogs on. She slings burritos but dreams of a writing career; he develops a coke habit and becomes a disgustingly glib London chat-show presenter, like the essence of every awful MTV VJ distilled into an indigestible brew. They continue lying about their mutual attraction through bad marriages, children, deaths and career fluctuations, keeping up the ruse until it is scientifically impossible to care about these people.

Tastelessly tasteful, the movie dwells in some fevered upper-middle-class fantasia where problems of the idly rich are all that matter in the world. She likes folk music and protest pamphlets, but doesn't object when he whisks her to the south of France for an allegedly platonic getaway that gets predictably steamy. This is the film's best sequence: the amorous pair bob in the water, their lips glistening as they're wrapped in a luminous pink-and-green sunset, gorgeously captured by cinematographer Benoit Delhomme. If only there were more such magic moments; instead we're treated to constant gum-flapping and a tedious progression of subplots that sap the energy.

The time jumping seems novel; but the experience is grueling, as we attempt to remember where (and when) we are, or why we should give a hoot.

Pity that David Nicholls couldn't adapt his own literary conceit into a workable script or that director Lone Scherfig — who got a monster of a performance out of Carrey Mulligan in An Education — couldn't do it again. Like its star-crossed lovers, One Day shuffles around lamenting and regretting what it could've been, when it should've been embracing the moment.