Tunes so good, you'll forget there was another Gallagher brother 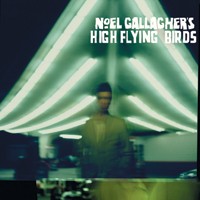 If there was any lingering doubt as to who the mastermind behind Oasis was, the debut solo album from that band's tunesmith and lead guitarist should settle it once and for all. Brother Liam's band Beady Eye and their debut, Different Gear, Still Speeding, was pleasant enough but obviously style over substance when compared to this superior effort, which mines such familiar Gallagher influences as the Beatles (with emphasis on Sgt. Pepper), the Kinks, T. Rex, Small Faces, even some Pink Floyd this time out ... That is, hooks galore. And it all ends up sounding like ... well, what else? It's very much like Oasis at its early best and, often here, ethereal spaciest. (Since Noel sang "Don't Look Back in Anger," one of the band's biggest hits, Liam's voice really isn't that missed.) Favorite track? It changes, listen to listen, day to day. Right now, the chorus of "Dream On," which demands the listener "shout it out for me," makes me want to do just that. "The Death of You and Me," with its "hard times" theme, could be mistaken for a genuine Ray Davies outtake. (Pity the album doesn't include recent single B-side, "The Good Rebel," featuring one of his finest and most melodic choruses to date!) And "(I Wanna Live in a Dream in My) Record Machine" basically captures what this Gallagher brother's vision and aesthetic has been from the beginning via its title alone. Mighty fine stuff.