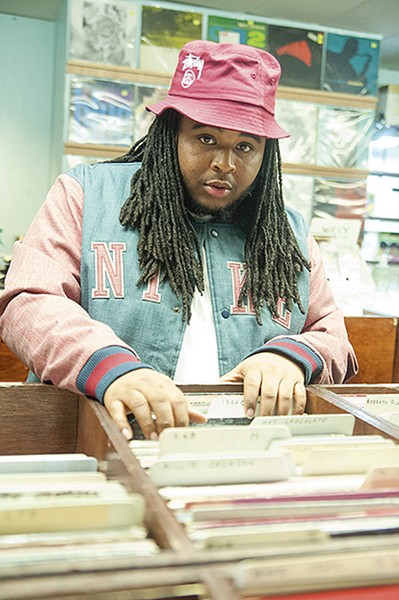 At Midtown's Peoples record store, Nolan the Ninja is digging the crates, as usual. "I go digging at least once a week, maybe three times a week if I'm trying to find something for a particular project," the emcee and beatmaker says while pulling out Mick Jagger's She's the Boss. "Mick was on some shit right here," he says. Nolan hops to R&B, then jazz, and finishes his hunt at the 99-cent bin. "You're seeing more and more artists putting out vinyl. Danny Brown did it last year," he says.

Nolan the Ninja (born Nolan Chapman) is a 22-year-old "rapper's rapper" and a "producer's producer." He's been rhyming all his life, but things got serious in 2010 after his graduation from Ferndale's University High School. "When I was 17, I was doing these shows at Bob's Classic Kicks. RenCen CoolBeanz, Supa Emcee, and others used to be there. I learned a lot; they filmed them but never released them," he says.

For the next two years Nolan worked on conquering his craft. He recorded songs at Liquid Flow studios, promoted them via Twitter and Facebook, and was able to book gigs at the Shelter, Albion College, and the Old Miami. His calling card was always his lyricism, but his nostalgic approach to producing beats put him in even more demand. "Growing up, my moms would always play the Roots and Erykah Badu. Because of hearing all of that, I learned formulas, how baselines are supposed to be played, and how drums are supposed to knock," he says. "The shit came natural, but it still took time."

In 2012, Nolan released his first official project, Ninja Town. The 10-track album featured appearances by B-Nix, CG Everyday, and Phil Fresh the Phillionarie. The album received a decent amount of attention, and Nolan was able to move units at local performances. "I was proud of it! It trended well on Twitter and did what it was supposed to do," he says.

Earlier this year Nolan released his second album, The Ill Shit, which was highlighted by his most notable single and video to date, "Fuck the Wack." "We basically modeled the video after the old cable channel The Box, where you called in the video you wanted to be see," he says. The clever throwback move resonated well with listeners and earned respect from fellow emcees. Nolan's forte continued to be lyrical dexterity and layered boom-bap beats. He produced Chavis Chandler's album, Dark Skin Jermaine, and he's currently promoting his newest album, illphoria, which is his first project to feature strictly instrumentals and remixes (a Madlibish type of joint). "I feel like the organic shit is going to last," he says optimistically. "I look up to Dilla, Pete Rock, Guilty, Phat Kat."

Nolan has not even removed the albums he just purchased from their sleeves, but he's already talking about coming back tomorrow to dig some more. He recently parted ways with his employer, FedEx, and is back to living off his music. "It's been times where I would be down to my last $5, and somebody will buy my album for $7 on Bandcamp," he humbly says.

He also has a positive outlook on Detroit's current hip-hop scene. "The vibe is nice right now," he says. "A lot is going on in my age bracket. ZelooperZ, Chavis Chandler, MAHD, DopeHead, DeJ Loaf, Detroit Che are all doing their thing," he says.

While not sure of his ultimate destination in hip-hop, Nolan understands that it could mean staying an underground artist forever or it could mean getting a million-dollar deal. "I love music so that's what I do," he says while staring at a copy of his CD. "I just want to feel accomplished so wherever it takes me, then that's where it takes me."