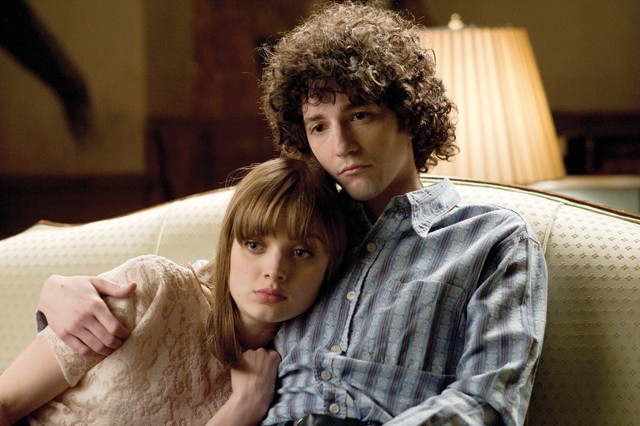 God save us from boomer nostalgia and its endless idealization of the '60s. Look, I get it. It was an important time for rock and roll, politics, and the upending of American social norms. But that decade's narcissism and self-indulgence wore thin two decades ago. Isn't it enough that the same generation that gave us freedom marches, psychedelic drugs and concept albums went on to tell their latchkey kids to "Just Say No," popularize tax activism, and vote for Romney? The truth is, I don't care where you were when Kennedy was shot or when you first heard the Rolling Stones. There are other stories to tell, other generations to examine.

Writer-director David Chase (The Sopranos) seems to at least acknowledge this sentiment in his star-is-not-born drama Not Fade Away. Mixed in with the banal intergenerational tensions, coming-of-age enthusiasm and connoisseur soundtrack playlist (carefully chosen by E Street regular Stevie Van Zandt) are nods to '60s-era hypocrisy and shallowness. The moments never bite deep or hard, but they're at least there. And true to Chase's affection for unexpected endings, his impressionistic coda makes clear that, to some, the Sex Pistols would be every bit as inspirational as the Beatles. Still, it's not enough to overcome what amounts to a meandering footnote to boomer self-obsession.

A fictionalized memoir of sorts, 67-year-old Chase's first feature film centers on Doug Damiano (John Magaro), a disgruntled Italian teen living with his parents and younger sister in suburban northern New Jersey. The time is 1963, and rock 'n' roll is everything. As the unnoticed drummer in a local cover band, Doug feverishly consumes emerging musical trends while dreaming of hitting the big time. He knows that musical fame is the only way a runt like him will attract Grace (Bella Heathcote), the upscale girl of his dreams. Unfortunately, his burly, working-class father Pat (James Gandolfini) doesn't share his vision of a celebrity future.

When the band's lead singer (Jack Huston) suffers a mishap at a basement party gig, Doug steps up to the mic and a frontman is born. Romance, ego conflicts, record demos, band breakups, fistfights and countercultural fashion trends ensue. As if all that weren't enough, Chase piles on flirtations with the music industry (Brad Garrett plays Jerry Ragavoy), Vietnam, an artsy older sister with daddy issues, a mental institution drama and — sure, why not? — cancer.

Not Fade Away is intimate, episodic and achingly poignant. It's also woefully insubstantial. Chase has created less of a dramatic narrative and more of an awkwardly paced, formulaic collage. Doug's story lurches from one personal conflict to the next, covering roughly five years of his life, and the truth is, it feels like a season of television shoehorned into a two-hour flick. None of the trials, tribulations or characters are particularly original or enlightening, but they do crackle with Chase's gift for scrupulous portraiture. Individual exchanges pop, the period details feel authentic, and there are some lovely moments (most between father and son), but the movie shallowly depicts rather than meaningfully articulates the American youth experience of the '60s. There's no thematic depth or insight, no grand purpose or criticism, just an anti-heroic wistfulness that feels all too familiar.

If Chase does anything novel in this film, it's to infuse it with a reverence for music. Going beyond just providing a first-rate soundtrack, Not Fade Away imbues its characters with a naïve sense of discovery — not only through the songs they play but the songs they listen to and talk about. Whether it's the genius of Robert Johnson, the gravitational pull of record stores, or a deconstruction of Charlie Watts' approach to the Stones' cover of "Not Fade Away," Chase captures how rock 'n' roll became a doorway to imagination for kids cloistered, suffocated even, by the rhythms and routines of suburbia.

The cast of young unknowns is engaging enough, but it's Gandolfini who stands out. Though on the surface he seems to be playing an honest, blue-collar version of Tony Soprano, and there is an Archie Bunker-berating-Meathead quality to his arguments, Gandolfini gives Pat the kind of depth, regrets and desires few sons ever come to recognize. Both a father-son dinner and final goodbye are expertly underplayed, packing a wallop that other, more sentimental directors would botch.

In the end Not Fade Away is a lot like Doug's band the Twylight Zones — it's engaging and has its moments, but it's just not good or ambitious enough to succeed. mt