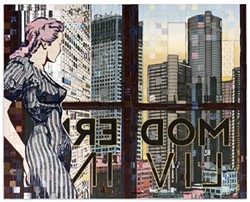 Since 1999, the Brooklyn, New York-based artists Patrick Miller and Patrick McNeil have collaborated as Faile — combining influences from street art, advertising, and folk art to create their own style. The group's latest exhibition, The Size of the Fight, opens at Detroit's Library Street Collective gallery on Saturday, which owes as much of its inspiration to the above as it does to the Motor City.

Speaking via a conference call over phone, the two Patricks (it could be hard to tell where Miller ended and McNeil began) say they first came to Detroit around 2011, drawn by a "personal interest in the city," and that they would eventually visit it four more times.

"A lot of our work when we do shows in particular cities, part of our research process is usually going there and having a firsthand experience," Miller says. "Another part of it is usually collecting ephemera, different bits of pieces of its culture that we can find in various ways, and trying to have fun with that and reflect some of those things back at it. It becomes part of a time and a place in our paintings and our imagery to make reference to things happening there, through our filter."

For Detroit, reference points included car culture, the city's architecture, and suburban sprawl. The Patricks say they could relate to Detroit's Middle America identity: Miller is originally from Minneapolis, while McNeil is from Edmonton, Alberta. As such, the loneliness of the suburbs is a thematic undercurrent in the work.

As a collaborative effort, the Patricks say they usually start off alone, collecting inspiration and making sketches, which they later review together. "We'll spend a couple weeks going through images and ideas," McNeil says. "And at the end of every day we usually get together and show each other what we found inspiring or interesting, and usually there's a discussion between the two of us, like, 'This one's awesome,' or 'I was looking at something similar, check it out.'"

Headlines are often incorporated, as much a reference to advertisements as a way of adding a poetic dimension to Faile's work. The hodgepodge style is further enhanced by Faile's choice of medium, which often involves painting or screen printing over wooden blocks, giving their work its signature quilt-like pattern.

The Detroit show will feature about 15 works on wood blocks, as well as sculpture, works on paper, and a mural. In addition to the The Size of the Fight, Faile will also present five new works on wood panels as part of Public Matter, Library Street Collective's outdoor art gallery located in the adjacent Belt alleyway; the opening reception will feature a performance by Flint Eastwood. After the exhibition, Faile says they plan on donating one of the panels to Detroit Academy of Arts & Sciences, an arts-based Detroit charter school.

It's a gesture perhaps echoed in a The Size of the Fight painting, which depicts Detroit's iconic Joe Louis Fist. "It's one of my favorite sculptures ever," says Miller. "I just think it's so amazing on so many different levels." The sculpture appears in an image depicting a girl painting one of the sculpture's nails. "I think it really just represents the power of small gestures, and kind of having this kind of creativity to set up who you are and your ability to make an impact despite your challenges," Miller says.

That ties back to the name of the show, which Miller says comes from a Mark Twain quote: "It's not the size of the dog in the fight, it's the size of the fight in the dog." He says the quote stuck with him while visiting Detroit. "I just feel like it's come a long way in just the time that we've been visiting it," he says. "I feel like it's coming back in such a creative revolution, and maybe that's from being from New York, but I feel like we've made so many friends and people who are artists who go there to feel inspired and feel like there's all this potential there. ... It really does feel like there's a bit of a renaissance happening there. So there was just something about the idea of 'size of the fight' in the title that is really referencing passion and what passion is and how no matter your challenges, you have the ability to make an impact. For us, I think there was something that really resonated with that idea."