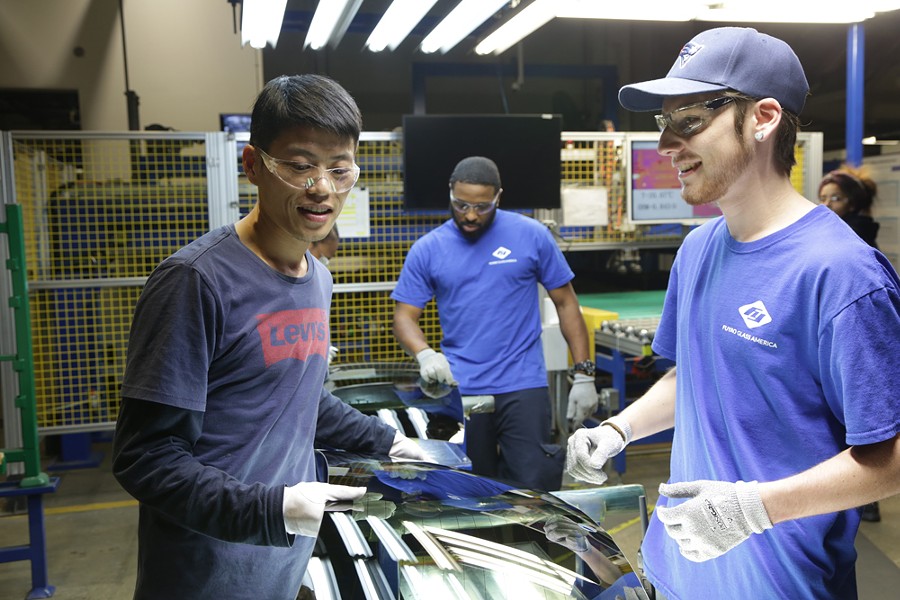 As much an elegy as an investigation, this documentary (distributed by and now streaming on Netflix, and the first film released by Higher Ground Productions, founded by the Obamas) examines the events surrounding a Dayton-area factory's re-opening after its shuttering under General Motors. Once a union-driven plant, the space is now under the aegis of a Chinese company, Fuyao — which makes automotive glass — and whose executives and supervisors appear on-camera repeatedly deriding their Ohio-based American workers on fiercely bigoted grounds, all of whom the factory employs for a pittance. Haunted by specters of industry's better days and the fall of the American middle class, the film observes what most Detroiters already know: that the aftermath of the Great Recession was chiefly a comeback for a select, well-heeled few. But it observes keenly the corporate tactics and promoted notions that have made this so, and the efforts by laborers to survive under, cope with, and eventually resist them.

Directors Julia Reichert and Steven Bognar doggedly track the plant's activities for years, delivering regular, surprising shivers with what they're able to capture via their fly-on-the-wall approach. From Fuyao execs' animated descriptions of Americans' "fat fingers" and hunger for praise to the sad spectacle of a Chinese supervisor savoring two Twinkies for lunch (his regular meal), Factory's portrait is grim but slightly leavened, and engages for its insightful gaze, well-honed narrative editing, and sweeping range of perspectives. Eliding any concrete on-camera persona for themselves, the documentarians seem to embrace the plant's ecosystem as its subject, catching workers, union-busters, supervisors, and upper bosses both on the job and off, treating even the worst of them humanely. The result is a story balanced enough to let its themes and outcomes speak largely for themselves, offering a lucid sense of who its people are. The film's workers are both outspoken, feeling individuals and dehumanized objects of their industry's oppressive force, stripped by GM closures of the labor rights their union predecessors fought and even died for. When one worker recounts her wages falling from roughly $29 per hour to just a little over $12, the film doesn't need to underline who its victims are — and it's only a matter of time, after cuts, overwork, and repeated safety violations that the workers begin to organize. All this to work in a factory once owned by GM — now at a lower standard, in service of big automakers' profits.

Over these proceedings hangs a smog of troubling irony; for the system that's eating the factory's workers (as opposed to their rich employers) is American to a T. Working off an assembly-line system that was perfected right here in the Midwest, Fuyao's Chinese proprietors are in essence repatriating one of America's key industrial-cultural exports. Since 2008 and well before, we've sent not just factory jobs abroad, but factory norms, making currency of a culture that understands human beings to be mere cogs, replaceable pieces of a vast machine. This system, refined elsewhere, in countries with far worse labor laws (there's always one somewhere), comes back from China in the film full-circle, flipping the script on narratives of outsourcing we're all so used to hearing. Watching Chinese executives abuse American workers in violation of local laws isn't any worse than Americans doing anything comparable abroad — but it does bring things close to home, showing us the pain we've wrought so cruelly elsewhere.

The casualties of this, naturally, aren't the people responsible, but instead the workers at the bottom. American Factory's sweep is vast, observing all this: the uncanny vagaries of cultural exchange, the coming crisis of automation, the American-modeled practices at Fuyao's factories in China. In what's perhaps its most frightening sequence, a group of schlubby Ohio-based supervisors is sent to tour the company's facilities in China with an eye to elevating their factory's efficiency, quality-control, and profit. Frightfully, these spaces — in which workers labor in dangerous conditions seven days a week, unable to see their kids for a year, and in which break times are passed over to "get things done" — provide for these supervisors an ideal model, one which they fumble clumsily to apply back home. Less practices native to China than they are a product of America's past, the film suggests it's only a matter of time before someone more skilled at their job does the same thing better, lobbying and finding loopholes to re-apply those same norms here. In fact, there's little doubt they're doing so right now, making these practices a vision as much one of our present than our past. It's all enough to ask the question: do we really want these jobs back?